Denying jailed believers any contact with families, the CCP not only torments them mentally but also uses it as a leverage to make them renounce their faith. 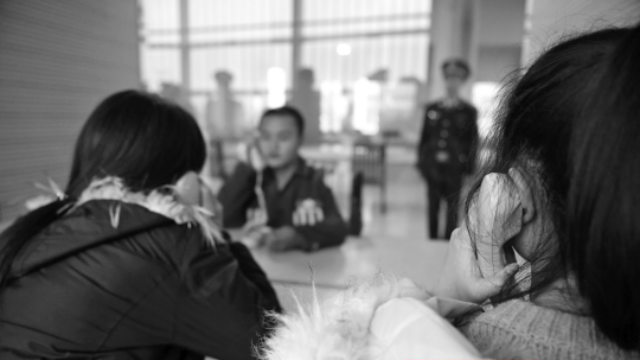 According to the Body of Principles for the Protection of All Persons under Any Form of Detention or Imprisonment, adopted by the U.N. General Assembly on December 9, 1988, “A detained or imprisoned person shall have the right to be visited by and to correspond with, in particular, members of his family and shall be given adequate opportunity to communicate with the outside world, subject to reasonable conditions and restrictions as specified by law or lawful regulations.”

Article 48 of the Prison Law of the People’s Republic of China stipulates that “A prisoner may, in accordance with the relevant regulations, meet with his relatives and guardians during the service of his sentence.”

Not only has this right been revoked by the Chinese authorities for “inconvenient” religious believers, but it has even become a means through which they force them to admit “guilt” and give up their beliefs.

In January, Zhao Guoming finally received a notice from the prison, allowing him to see his son who had been behind bars for a year and a half for being active in The Church of Almighty God (CAG). “I was ecstatic. I could finally see my child,” the man remembered the joy he felt that day.

During the time his son was incarcerated, the police and the prison administration had continuously refused Zhao Guoming visitation rights, which made him worry that his son was tortured and abused in prison. Zhao Guoming’s longing to see his son grew with each passing day.

On the day of his visit, he was one of the more than 100 family members who lined up outside the prison hall, awaiting to see their loved ones. When his turn came, prison guards refused to let Zhao Guoming inside on the grounds that his son’s thinking “hadn’t been reformed yet,” and that he could only see him after this goal is achieved.

“They also said that my son believes in Almighty God and is a ‘serious criminal,’ so I can’t see him,” recounted Zhao Guoming.

“Another person who was waiting in line with me also came to see his son. When I asked what crime his son had committed, he answered that it was robbery,” Zhao Guoming continued his story. “I don’t understand. Why the relatives of murderers, arsonists, and other evildoers are allowed to visit their loved ones, whereas I’m not allowed to see my son, who didn’t commit any crime and was jailed just because of his faith?”

A young CAG believer was arrested alongside Mr. Zhao’s son. His relatives, too, have been turned away repeatedly when trying to visit him in prison. The police told them that being a member of the CAG is worse than any other crime, which makes him a political prisoner.

The CCP places on the list of the xie jiao and severely suppresses those religious groups that are not subject to government control or are regarded as growing too rapidly and may pose a threat to the regime. Among them, the CAG is the single most persecuted religious group in China, more than 20 of its members were tormented to death last year.

Under the CCP’s strict ideological control, when political principles of the regime are put above all, members of the banned groups are treated as the most dangerous criminals, along with dissidents, and other prisoners of conscience, simply because the CCP doesn’t tolerate their teachings and beliefs.

Bitter Winter obtained an internal document of a prison in the southeastern province of Fujian, Notice on Further Strengthening Management of Criminal Visitations, which lists Falun Gong practitioners and CAG members alongside criminals who “endanger national security.” In principle, special requests for visits (i.e., requests for visitations aside from regular visits designated by the prison) are not allowed for such persons.

While in detention, CAG members are forced to undergo “transformation through education” until they sign a statement promising to give up their faith.

Bitter Winter has reported on a classified document, issued in April by the General Office of the CCP Central Committee and the General Office of the State Council, that deals with the jail reform in China. Entitled Opinions on Strengthening and Improving Prison Work, the document requires explicitly to “intensify ‘de-radicalization’ work; strictly deal with, according to law, criminals who endanger national security, who belong to a xie jiao, who are involved in gang crime or evil, who have a major social impact, and who have restrictions on the commutation of their sentences.”

It has been one and a half years since Bai Ying’s mother was arrested for being a member of the CAG. In March, she received a notice from the prison, informing her of her mother’s worsening medical condition due to high blood pressure. The woman became very worried since she had been prevented from seeing her mother since her arrest.

“My mom has always had low blood pressure. How did it become high?” Bai Ying shuddered as the thought that her mother could be tortured crossed her mind.

Despite her many attempts, Bai Ying was turned away by prison guards. “Your mom hasn’t admitted her guilt yet, so family members cannot visit her,” said one of them. “But you can communicate via written correspondence. You should write a letter to your mother, telling her to admit her guilt promptly. Only then will she be allowed to see her family.”

A month later, a dramatic change occurred. The prison notified Bai Ying that she could visit her mother. But for a price: she should persuade her mother to give up her faith.

Only atheist family members may be allowed to visit

The family members of Zhao Mei, a CAG believer in the central province of Hubei, are devastated. “It’s been nearly two years since my sister was arrested, and I haven’t been able to see her. I don’t even know whether she’s dead or alive,” said Zhao Mei’s older brother. “The prison guards told us that we couldn’t see her unless she admits her ‘guilt.’ My sister is resolute, she doesn’t feel guilty of anything, and she is unwilling to write a ‘statement of guarantee’ promising to abandon her faith. They also told us that after her time in prison is done, she would still have to undergo ‘transformation’ until she admits her ‘guilt.’”

To get the permission to visit Zhao Mei, her family members were also demanded to apply for a “certificate” proving that none of them are religious from the police in the locality where their household is registered. In the past two years, such requirements had become increasingly prevalent throughout China.

A prison guard confirmed to Bitter Winter that the requirement is an order from the central government: If the relatives of CAG believers want to visit their loved ones in prison, they first should get the needed certificate from the police and only then can they apply to the prison administration. If their request isn’t approved, they won’t be allowed in to see their loved ones.

The restrictions imposed by the state on visiting religious prisoners of conscience is especially hard on elderly people; moreover, if they are members of the banned groups themselves. Over the past year, a CAG believer from southern China has been struggling over whether to go and visit her son, also a CAG member, sentenced to six years in prison for his faith. “I want to go and encourage him, but I’m afraid,” the old woman said with an anxious look on her face.

(To protect the identities of the people, pseudonyms are used instead of their real names).