To prevent “Western infiltration” and eradicate religion from schools, the CCP is altering the content of literary classics, language and history textbooks. 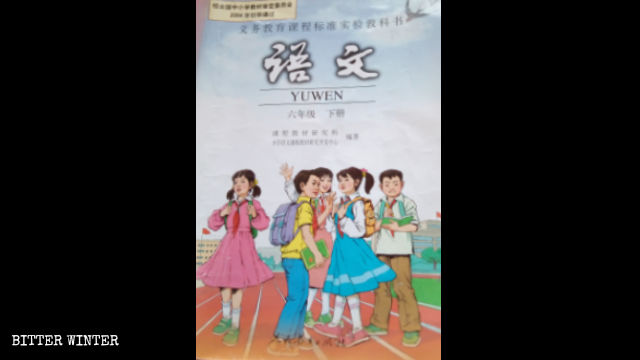 Last year, the CCP launched a campaign against religious belief at schools throughout China, forcing students to sign their names and swear an oath to resist religious belief and boycott Christmas and other Christian holidays. Meanwhile, teaching curricula are investigated, and teachers indoctrinated through special “assistance sessions” to “ensure that education and teaching adhere to the correct political direction.”

No to Bibles and God’s blessings

To help achieve the goal of eradicating any teaching content with religious overtones, the CCP is now altering the books written by international authors that are read by primary and secondary school students.

According to a parent of a student in north Hebei Province, the content of some books was deleted or changed in the new version of the grade six Chinese language textbook, published by the People’s Education Press in January 2019.

The original version of English writer Daniel Defoe’s (1660-1731) novel Robinson Crusoe contains the following passage: “also, I found three very good Bibles, […] some Portuguese books also; and among them two or three Popish prayer-books, and several other books all which I carefully secured.” In the new version of the textbook, the content related to the Bible and prayer books was deleted, and all that remains is “also, I found some Portuguese books.”

In the passage “I should lose my reckoning of time for want of books, and pen and ink, and should even forget the Sabbath days,” the last two words have been changed into the “days of rest.”

The short story Vanka by Russian writer Anton Chekhov (1860-1904) has also been altered beyond recognition. Religious terms in the original version – such as “attend Sunday service,” “hope God will send you his blessings,” “I will pray for you,” and “I beg you for Christ’s sake” – have been deleted, and “for the dear Lord’s sake” has also been altered to “for goodness’ sake.”

The parent of the sixth-grader in Hebei said that the CCP’s practice of altering and distorting foreign classics is an insult to the creators of these literary works, and is also a kind of exclusion and suppression of Western culture and religious beliefs.

In April, while students at a primary school in Puyang city, in central China’s Henan Province, were studying from their Chinese language textbook, a student asked the teacher whether the character 祷 [dǎo] (a bound morpheme mostly used to form words and rarely used in isolation) could be used to create the verb 祷告 [dǎogào] (“to pray”). The teacher replied sternly, “No, that’s a religious word. You can’t use any sensitive words related to religion.”

According to mainland Chinese media reports, the central government requires that primary and secondary school textbooks comply with national policies and that the direction of education, which carries the will of the state, be implemented through unified teaching materials. Under the ideology of CCP’s totalitarian rule, the modification of textbooks is not limited to the field of religion. Any expression contrary to the CCP’s ideology is unlikely to escape censorship.

In the introduction to the Chinese language character 自 [zì] in Xinbian Xuesheng Zidian (“Newly-Compiled Student Dictionary”), published by the People’s Education Press, the word 自由 [zìyóu] (“freedom”) has been removed.

History revised, Mao Zedong is back

In the latest version of the middle school Chinese language and literature textbook, Hereditary Houses of Chen She, a fragment of the 2,000-year-old classic Records of the Grand Historian depicting a failed uprising against a despotic ruler has been removed. Some commentators noted that the passage was deleted because of a remark by one of the characters “Are kings and nobles given their high status by birth?” The authorities considered it too reactionary.

Some schools are going so far as to revive the personality cult of Mao Zedong. On December 26, during the unveiling of Mao Zedong’s new statue at a primary school in Wenji township, in Henan’s Yucheng county, a village Party secretary called him “the guardian god of the Chinese people and the giant spiritual symbol.”

The censorship of books is accompanied by atheist and Communist indoctrination of students. Playing to generational habits, mobile apps are entering school campuses, with the purpose of molding school students into a new generation of loyal Party successors and followers to the new “great leader” Xi. The People’s Daily Youth Network app demands all students to participate in reading activities under the theme “learning new ideas and becoming good successors” by reading articles and answering questions. By using the “Xi Study Strong Nation” app, the Young People Study Xi initiative encourages students to study the president’s speeches.