A new app for smartphones, the use of which is mandatory for CCP members, takes the personality cult of President Xi Jinping to new, unprecedented heights. 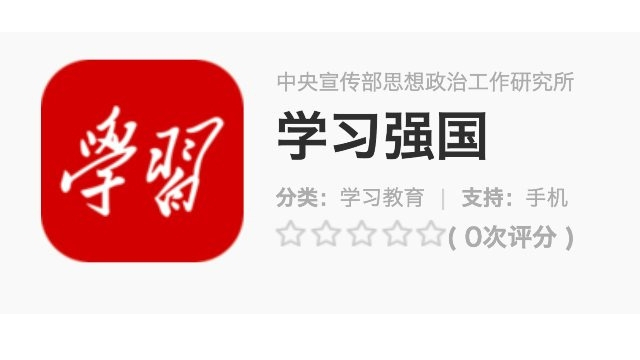 Chairman Mao is back, and this time he has got a smartphone. The label “neo-Maoism” for the ideology and practices of President Xi Jinping can be misleading. He maintains both the criticism of the Cultural Revolution formulated by his post-Mao predecessors and their unabashedly pro-capitalist attitude towards the economy. In fact, anti-capitalist students who tried to manifest hailing Mao and Karl Marx were immediately arrested.

The Orwellian story reads like a dystopian novel but is unfortunately true. In January 2019, the CCP launched a new app available for both Apple and Android platforms, “Xi Study (Xue Xi) Strong Nation” (学习强国), available from the Web site xuexi.cn. The name needs to be explained, as it includes a word game in Chinese. “Xi” is the President’s last name but is also the second character in the Chinese word xuexi (学习), which means “to study.” The implication is that the study of the President’s utterances is the most important study of them all.

Apple, which is censoring hundreds of applications in China quickly obliged, as did the other platforms; and the app is now up and running at full speed, courtesy of the Propaganda and Public Opinion Research Center of the Central Propaganda Department of the CCP (中共中央宣传部宣传舆情研究中心), once known as the CCP’s Research Center on Ideology and Political Work (思想政治工作研究所).

It includes speeches and writings of President Xi, in the text, audio, and video forms. But it also includes something else. Users gain points by using the application. This is called the “Xi Study Points” system (学习积分系统). The system is clever but not generous. As reported by the specialized web site China Media Project, reading one article earns you only 0.1 points. The same applies to posting an appropriate comment. Watching a single video earns you 0.1  points. Thirty minutes of sustained activity is rewarded with 1 point.

This is not all. There is a surveillance system, which according to China Media Project is quite effective, which would watch you and can tell if you move away from your screen after having launched a text or video. It can also tell if your eyes read only a few paragraphs rather than the whole text. And there is a daily limit for earning points, to make sure that you would not use the app only on weekends. Not that use on weekends is not encouraged. There are “happy hours” where you can earn double points: every night, Monday to Friday, from 8:30 to 10:30 pm (not later: the CCP wants you to sleep and be effective at work the next day) and from 9:30 am to 10:30 am, and from 3:30 pm to 4:30 pm, on Saturday and Sunday. With this system, the CCP effectively colonizes most of the app users’ free time.

But, after all, one can simply not use the app and not participate in the silly competition of earning Xi points, right? Wrong. The use of the app is mandatory for all CCP members. And many workplaces impose a daily or weekly quota of Xi points. If we believe a post on the social networking site Douban, in a public school, teachers have been requested to fulfill the crazy quota of 40 Xi points per day. This is impossible without staying long hours at night without sleeping, and the post also outlines some possible strategies to cheat the system—but, obviously, the CCP reads these posts too and will release updates with more built-in anti-cheating software. Mandatory seminars on how to properly use the app have been organized all over China, with the clear message that those caught cheating or not fulfilling their quotas may lose their jobs or worse.

This may be too much even for the high CCP cadres, who are not exempted from using the app. Bitter Winter has learned that, some months ago, all of a sudden the portraits of Xi Jinping disappeared from the CCP offices in several villages and cities. They soon reappeared, but some believed it was a mafia-style message from senior CCP bureaucrats to Xin Jinping: do not exaggerate, or else.