With the pretext of preventing “western forces” from threatening to the CCP’s regime through religion, the authorities are sparing no efforts to suppress and shut down house churches. 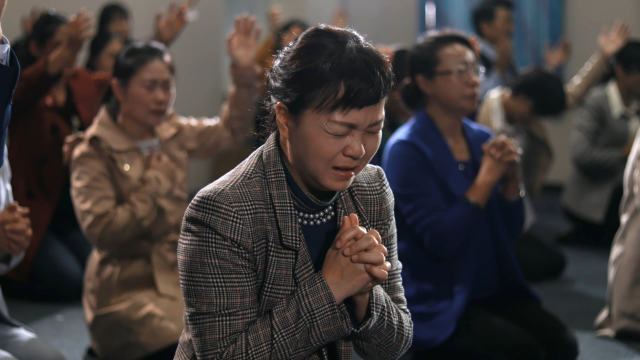 Earlier this week, Xu Xiaohong, the chairman of the National Committee of the Three-Self Patriotic Movement of the Protestant Churches in China raised concerns that foreign forces are infiltrating privately established Christian gathering venues  attempting to influence China’s social stability and even to subvert the Chinese regime. “But their efforts are doomed to fail,” he said.

“There are many problems concerning Christianity in China, such as the infiltration of foreign forces, privately established gathering venues, a lack of excellent patriotic pastoral personnel, and the weak legal consciousness of some pastors and believers, which may cause serious political consequences if they are not taken seriously,” Mr. Xu said. “Only by continually drawing on the fine traditions of Chinese culture, can China’s Christianity be rooted in the fertile soil of Chinese culture and become a religion recognized by the Chinese themselves.” he added. “Only by continuously carrying forward and practicing the core values of socialism can our Christianity truly be suited to socialist society.”

China’s officials have long used the fear of foreign infiltration through religion as a reason to crack down on non-approved religious venues. Bitter Winter has previously reported that the CCP often uses the pretext of resisting religious infiltration to prohibit Christians in China from having ties with foreign religious groups, or else they will be regarded and fought against as hostile forces. In other cases, ties with foreign organizations are simply invented and used as pretexts to crack down on house churches.

I include in this article information I received from a confidential source. I have no documental evidence backing this information, but on the one hand, based on previous experience, I am persuaded the source is reliable. On the other – the measures my source relied to me have been, in fact, implemented.

According to his story, in mid-June of last year, the government of the Sartu district in Heilongjiang’s Daqing city convened a meeting of representatives from each sub-district, community, and police station. At the meeting, officials from the Ethnic and Religious Affairs Bureau conveyed the contents of a highly confidential document, issued by the central authorities, regarding the closure of several house church meeting venues.

Citing the document, one official from the Ethnic and Religious Affairs Bureau said that overseas anti-China forces had already infiltrated China through religion. He also said that some house church meeting venues had been playing videos showing the violent behavior of the CCP police to make religious believers oppose the Communist Party, using illicit relations with foreign countries to overthrow the communist regime.

The official also demanded that the number of house church meeting venues in the jurisdiction be completely investigated and ascertained within two weeks. He stated that any church meeting venue that does not belong to the CCP-controlled Three-Self Church must be designated as illegal and shut down – regardless of whether it had a religious activity venue registration certificate, and regardless of whether it had banded together with foreign anti-China forces or not.

He also stated that this work is a political task, and demanded that each sub-district, community, and police station act in concert to shut down all house church meeting venues in the area and arrest any believers who persist in attending such gatherings.

Since the document was top-secret, in order to prevent leaks, the authorities never released copies of it, which was read but not distributed in the meetings, and instead demanded that the attendees implement it while maintaining confidentiality.

And implemented the document was. Four house churches in the area that had some 600 believers in total were placed under strict surveillance. Afterward, delegates from each sub-district and community received a form that listed the items to be investigated, including the meeting venue locations within the jurisdiction, the names and phone numbers of the persons in charge of the meeting venues, the number of people who attended the gatherings, and other information. Delegates were instructed to investigate the meeting venues, fill out the forms and submit them to their superiors.

Less than a week after the meeting, two house church meeting venues in one community were identified by police officers. While believers were holding a gathering, the police came to the door to investigate and videotape them, and claimed, “The government is fighting infiltration by anti-China forces now. As long as there are five people or more in the home, the gathering is considered illegal.” Subsequently, the police forced the hosts of two meeting venues to sign an undertaking that they will not organize any more gatherings.

However, one of the two meeting venues, attended mostly by elderly Christians continued to hold gatherings. A few days later, they received a warning from the police: “If you continue holding gatherings, we will arrest you. Your grandchildren’s opportunities to attend school, obtain employment, and become civil servants will all be impacted.” With no other option, the meeting venue was forced to close.

One elderly believer said helplessly, “We old folks just gathered to read the Bible. What could we infiltrate? The government can come up with any kinds of excuses to fight against religious belief.”

On November 27, another house church meeting venue in Sartu district was shut down. According to a believer from this venue, on that day, Religious Affairs Bureau officials ordered them to cease gatherings, remove the cross, and clear out all of the tables and chairs from the meeting venue; otherwise, the host’s house used for gatherings would be demolished. With no other choice, more than 100 believers were forced to disband.

In November 2018, at least three house church meeting venues in Lindian county, under the jurisdiction of Daqing city, were also shut down by the authorities.