With increasing surveillance by undercover agents in state-approved churches, churchgoers must exercise caution to avoid being implicated and suppressed. 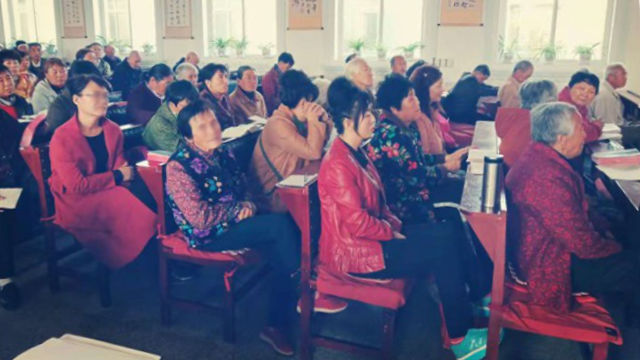 Under the CCP’s surveillance, not only the content of sermons in Three-Self churches is strictly controlled, but anything congregation members and the clergy say is monitored by specially-assigned “information officers,” grassroots-level government officials, and higher authorities’ secret inspections. Any “inappropriate” remark could implicate the church, resulting in severe punishment.

In April, a Three-Self church preacher in Anshan city, in the northeastern province of Liaoning, warned his congregation: “Don’t think that the person sitting beside you is a believer. Perhaps he is an undercover agent from the United Front Work Department, even if he is adept at chatting with you about believing in the Lord, and his attitude might even be very gentle.”

The reason for the preacher’s warning was because, recently, two government-approved Protestant churches in Liaoning’s capital Shenyang were forced to stop holding gatherings after failing a government inspection.

“When the United Front Work Department conducted a secret inspection, they discovered that the information on Christians submitted by some churches contained inaccuracies. They also heard some believers express their discontent about the government. As a result, the leader of the Religious Affairs Bureau was criticized and forced to write a self-criticism,” explained the preacher.

To make sure that his church doesn’t suffer the same fate, the preacher is teaching his congregation on how to be cautious in what they say or do and how to evade “fake believers” – government agents, infiltrated in the church.

“If someone asks you what believing in the Lord is all about, you should answer, ‘All I know is that I love my country and I love my religion. I don’t know anything else,’” the preacher “rehearsed” with his congregation. “If someone asks you why the national flag is hung in the church, you can’t say that the government forced us, or that the church would lose the permit if we didn’t. If you answer that way, the church will be punished. Instead, you must answer: Because I’m Chinese.”

The preacher added that believers should avoid the topic of religion as much as possible. “Just say, ‘All I know is that I love my country and love my religion,’” he warned.

The preacher also reminded believers to speak cautiously when expressing their opinions in public, to avoid being reported for making inappropriate remarks, which could put the church on the government’s blacklist.

A co-worker at a Three-Self church in Zhen’an district of Liaoning’s Dandong city told Bitter Winter that believers and the clergy are very vigilant at what they say during a gathering. “The Religious Affairs Bureau has assigned an informant to the church who is familiar with all church-related matters. Even when we go to buy something for the church, the informant follows along,” the co-worker explained the reasons behind the precautions.

“The Communist Party wants to know everything believers say, as well as the content of meetings. They are keeping us confined to the church now. On the surface, they allow us to believe in God, but we must do everything according to the Party’s policies and demands. We have no freedom whatsoever,” the co-worker added.

A resident of Donggang, a county-level city under the jurisdiction of Dandong, revealed that last winter, local government officials assigned him to serve as an information officer at one of approximately 200 meeting venues in Dandong. “The Religious Affairs Bureau stipulated that each church must have an information officer to monitor the situation of believers at the church and regularly report it,” explained the man, adding that they are sent to courses on their duties as informants from time to time.