The CCP is demanding state-approved preachers to replace the words of God with Communist ideology and Confucian values. 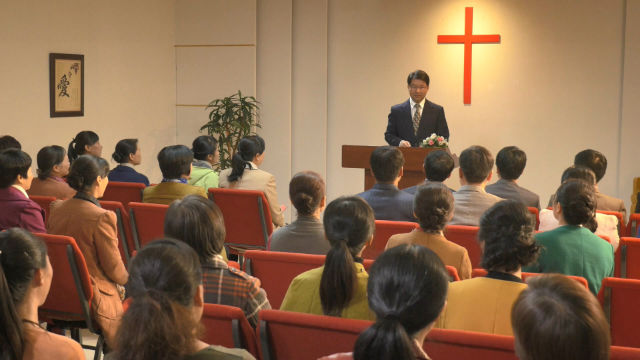 A Three-Self Church preacher in the Demonstration Zone of Shangqiu city, in China’s central Henan Province, was disappointed when the sermon that he had sent to the local authorities for approval was denied. The reply, which he received on March 15, stated that the content of the sermon was substandard: too much religion and not enough Communist ideology. Two major concerns were indicated: the statement that “God made heaven and earth, and created everything,” and that the quotes from the Bible were given without any Chinese interpretations or the inclusion of any traditional Chinese culture aspects.

To put it shortly, the sermon was not “sinicized” enough.

The censorship of sermons is a common occurrence in today’s China: The clergy of the government-approved churches are required to submit for authorities’ review everything they plan to say to their congregations.

A colleague of the censored preacher said that the government wants all sermons to be in accord with the Party ideology and its current policies; they should always praise the goodness of leaders and beauty of China’s nature. Sermons should include topics like the evolution or the Communist Party’s faultless leadership and kindness as the reason for the good life of China’s citizens.

“We’re in a very difficult position now,” the preacher said helplessly. “By making us write these ‘sinicized’ sermons, isn’t the CCP forcing us to tell lies and go against the Lord’s words?”

To ensure that believers only hear the words of the Party, the authorities employ a variety of means to control the clergy: from ideological assessments to the writing of sermons on their behalf. As a preacher from Manas county of Changji Hui Autonomous Prefecture in Xinjiang revealed, for each gathering at his church, sermons are written in advance by the local Ethnic and Religious Affairs Committee and are sent to him via WeChat messaging app. On top of that, the police officers who stand guard at the church’s entrance must know the sermon’s content so they can supervise the preacher.

Training classes and seminars for preachers as well as other “sinicization” events are also popular with the authorities. On March 11, the southeast Fujian Province’s Two Chinese Christian Councils decided to organize a number of such activities. Among them, a preaching seminar on the topic “using the love of Christ to tell Chinese stories” is planned to be held in late May.

The guidelines adopted at the meeting state that the content of sermons should be based on “Xi Jinping Thought on Socialism with Chinese Characteristics for a New Era” and that the classical teachings of Christianity should be interpreted in accordance with the progress of the times, demonstrating the characteristics of Christianity in a new era to “sinicize” the church.

Confucius and the Bible

At the beginning of the year, the Ethnic and Religious Affairs Committee of Henan’s Shangqiu city held a three-day training for Three-Self Church preachers about the importance of Confucianism. One of the speakers from the Two Chinese Christian Councils expounded on the consistency of the teachings by the sages of Confucianism – Confucius (551-479 BC) and Mencius (371-289 BC) – with the Bible. According to him, the 5,000-year civilization of the Chinese nation is heavily influenced by them, so their ideas and traditional Chinese culture must be integrated into sermons for Christians.

The training has caused debates among the participants who expressed varying opinions on what the government wants them to preach to their congregations. One of them said that the teachings of Lord Jesus are reflected in Chinese culture. He mentioned that while celebrating traditional Chinese holidays like the Dragon Boat Festival, the Mid-Autumn Festival, and the Spring Festival, families get together, have meals and spend time with each other. “The whole family lives in harmony, and it is consistent with the way of the Lord Jesus,” the preacher said.

Another participant stated that the insertion of traditional Chinese culture into the content of sermons constitutes secular corrosion and infiltration of the Christian faith.

According to the third preacher, even though the current CCP measures have not yet reached the levels of complete obliteration of Christianity, as during the Cultural Revolution when people weren’t allowed to hold religious gatherings at all and anyone who did was arrested, he sees dangers in something else. “The current practice, in fact, is to alter the Bible. The state is making people reinterpret it,” he said. In his opinion, Christians now must know and understand the Confucian thought as well as be proficient in the original text of the Bible, because, through “sinicized” sermons, the government will interpret the Bible in such a way that it would be hard to tell that Confucian thought has been added to it.

The preacher added that the goal of the state is to get rid of “the pure truth from the source.” “In the future, preachers will be unable to tell whether what they are preaching is right or wrong,” he said. “On the surface, the government allows you to have belief and hold gatherings, but what you believe in might not be Christianity at all, but rather the Party religion.”

Some preachers view the “sinicization” of sermons as dangerous and “poisoning the spiritual food of believers,” to transform their thinking and secularize the church.