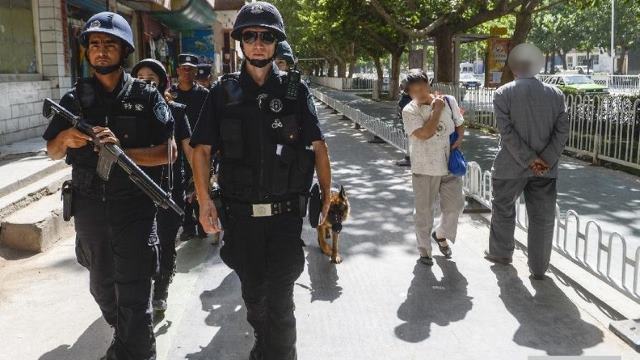 People are increasingly terrified of the authorities as arrests of Chinese Muslims become more frequent and random.

Bitter Winter has received reports from all over Xinjiang that detail the various reasons for which people got picked up by the police for their religious belief.

On June 20, Wang Ru (pseudonym), an elderly Hui woman from Karamay, received a phone call from her neighborhood’s committee cadres. The caller demanded of her to renounce her faith. This was third such call, but she refused this time as well.

However, in response, she was threatened that she would lose her retirement pay and her son’s minimum living allowance would be withdrawn.

The next day, two female cadres moved into her home and stayed on for three days. They watched every move of hers and continuously took pictures. Ms. Wang felt deeply anguished at such harassment.

Authorities block Muslims from practicing their faith, send them to camps

Hui Muslim residents of Tacheng’s Ganguan village are having a tough time practicing their faith.

In March, an elderly imam was arrested and detained at a “transformation through education” camp in Emin County People’s Hospital.

According to sources, at least 30 more people have been detained as well. While some are picked from their homes, others are captured from mosques. Two young imams, both of whom had state licenses, were tricked into showing up at a hospital for blood tests. When they arrived, they were arrested and sent to a camp. All these Muslims are still in camps, and not everyone is allowed to see their family members.

Authorities have resorted to several other methods as well. In May, the entrances to mosques during Ramadan, the holy period of fasting for Muslims, were blocked and no one was allowed to enter. The same thing followed on the festival of Eidh-al-Adha in August.

Arrested for copying scriptures years ago

In April, five officers broke into the house of Zhang Mingzhong (pseudonym). Mr. Zhang is a Hui Muslim resident of Shawan county. The police officers found an old notebook, in which his wife had copied some Islamic scriptures years ago. They also found a mat that is used during namaz (the Islamic form of prayer).

As a result, Mr. Zhang’s wife was detained and sent to a camp. Ever since then, the authorities have demanded that his son and daughter-in-law attend the national flag raising ceremony every week. They have also been threatened that if they don’t cooperate and keep up a good attitude, their mother’s release will be delayed.

Mr. Zhang recently got the permission to visit his wife in the camp. He found out that she is allowed to be outside in the sun for only 10 minutes every day. Rest of the time, she is locked up in a room with no windows. She is being forced to learn Chinese and has to write exams. Mr. Zhang also revealed four of his relatives had been taken away for reading Quran in the past.

Official arrested for being a devout believer

Mr. Tuo was the deputy secretary of a farm managed by the Xinjiang Corps’ Sixth Agricultural Division until recently. He was taken away to a camp when it was discovered that he was devout Muslim and in-charge of local religious work for his neighborhood. He continues to be in detention.

In May of 2017, the police arrested an elderly woman from Manas county when she refused to remove her hijab, the headscarf worn by Muslim women. She was later sent to a camp and is yet to be released.

Incidents of Muslims being arrested for their faith or such minor reasons are becoming increasingly common in Xinjiang. This has led to fear and panic amongst Muslims and commentators say that the CCP is using the arbitrary label of “illegal religious activities” as a justification for these unlawful arrests.