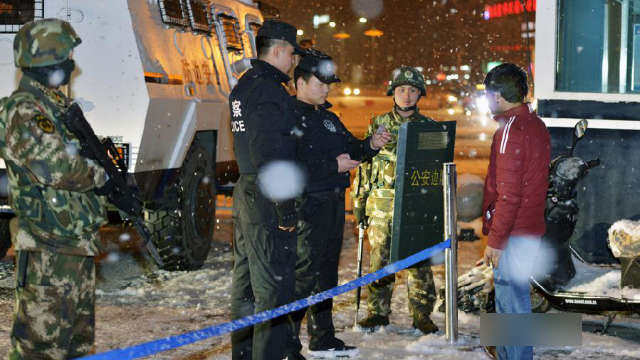 Chinese authorities set up checkpoints and surveillance cameras, track travel and harass students in an effort to stamp out Muslim faith.

If you want to see a modern police state in action, go to the Xinjiang Uyghur Autonomous Region in far western China.

In Xinjiang, there is an inspection station placed roughly every 50 meters along the main streets. State-approved inspectors check each individual’s cell phone, to see whether they are in touch with their Muslim relatives abroad, or whether they are communicating with religious leaders overseas. Any Uyghur who leaves China faces a dilemma: If he returns to China, he is likely to be arrested and sent to a “transformation through education” camp. If he does not return to China, his family members will likely be sent to camps. Even applying for a passport may cause an Uyghur to be classified as an “unstable person” and sent to “study.” All of these threats were reported to Bitter Winter by anonymous sources in Xinjiang.

Our sources also revealed that officials had incited the people in Xinjiang to report on their neighbors. Some residents have been required to install surveillance cameras in their homes. Noting the sophistication and technological savvy of the surveillance, one of the sources said, “You can hardly imagine. When ethnic Uyghurs and Huis go shopping at the supermarket or vegetable market, and even when they use public restrooms, they must always swipe their ID card. This has already become a common occurrence for people in Xinjiang.”

The authorities’ surveillance of, and control over, Uyghurs applies to those who are working outside of Xinjiang as well.

Amina is an Uyghur working in Shanxi province in the north of China. She told Bitter Winter that if Uyghurs want to go outside Xinjiang to work, they must complete a detailed registration form at the local police station. In addition, the government in Xinjiang assigns a person to call the workers every week at random times and ask them about their situation outside Xinjiang. If anyone fails to answer the phone three times, officers can arrest them and send them back to their homes in western China. Many Uyghurs from Xinjiang who are living out of town are afraid to let their cell phones out of their sight.

Such strict surveillance has also affected the travels and accommodations of Uyghurs.

Xin Ran works as a hotel receptionist in Hebei Province’s Qinhuangdao city. She revealed to Bitter Winter that the hotel where she works received a WeChat message last year from the local police. The message demanded that if Uyghurs from Xinjiang stay at the hotel, the building’s owner must notify the police, and the room adjacent to the Uyghur’s room must be given to public security personnel. The hotels are also required to be equipped with vehicles to facilitate the public security personnel’s surveillance of Uyghur’s travels. These strict regulations have caused many hotels and inns to refuse to accept travelers from Xinjiang to avoid making trouble for themselves.

“Last October, two Uyghur women from Xinjiang came to a hotel to stay for the night,” said Ms. Xin. “The hotel owner was worried that he would be implicated, so he turned them away. Other nearby hotels also did not dare to receive them. In the end, they were forced to spend the night on the streets.”

Even some Uyghur university students who are studying in other provinces have also become victims of the authorities’ tough regulatory policies.

Last September, Rena, an Uyghur student, went on a trip with a few classmates. While waiting for a train at the station, they were questioned by police officers. After the police learned that Rena is an Uyghur from Xinjiang, they took her into an interrogation room alone. Four or five police officers armed with batons entered the room after her and checked her ID and student cards. They placed a card in her cellphone to scan her call history and monitor her whereabouts.

She was released, but for the remainder of her trip, she was subjected to “special treatment” because of her identity. She was constantly asked for identification, even while dining at the hotel, and questioned by the police about the registration of her student and resident ID cards, and other information.

Seeing the way their classmate was treated, Rena’s fellow travelers also suffered from uncertainty and fear. One ethnic Han classmate said, “I don’t know what will happen. We’ve never encountered such a situation before.”

Although Uyghurs are officially “autonomous” in name, in reality, they have no autonomy whatsoever. They are regarded by the Chinese Communist Party as “terrorists,” and subjected to discrimination and persecution.