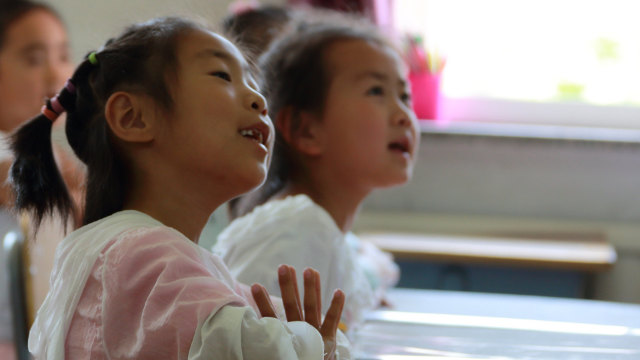 All references to God and religion were removed from the reading materials for children, including the Ten Commandments.

In Hongdong county of the northern province of Shanxi, a Hong Kong-based charity recently set up a Sunday school for “left-behind children.” The term refers to children whose parents have gone to work in the city, leaving them in the countryside in care of their relatives or friends. According to official statistics, in 2016, there were 61 million children left behind in villages across China by their migrant worker parents.

The Christian parents were excited that their children would be able to receive some religious education in their absence. Considering the crackdown on any religious activities in China, such opportunities are rare.

The Sunday school operated out of a government-controlled Three-Self church in the county and had already been through multiple layers of scrutiny. For reasons unknown, the school was called a “study class” rather than a Sunday School.

The authorities have, since then, meddled in the content being taught to the children. Each and every reference to God was removed, including the first four commandments as well as the Genesis. Only “maxims,” not even called “commandments” by the teacher, such as “you shall not kill,” “you shall not commit adultery” or “you shall not steal” were taught. The children could never tell that they were reading from the Bible. At the end of the class, the children would sing the national anthem with their teacher.

When the parents found out about this and enquired if there would be an additional class to teach the Bible, the teacher said, “This is the Sunday school course. The Bureau of Religious Affairs didn’t allow me to teach the children the Bible. They said the children are too young to understand it.”

The parents were shocked, and an elderly Christian lamented, “The government doesn’t allow us to spread the gospel to minors in any way.”

As per reports, early this year the CCP proposed to launch a revised compilation of the Bible, as part of its “sinicization” policy. This would include scriptures from Confucianism, Buddhism, and Daoism. It would also reflect the core value of socialism.

Priest Liu Yi, the founder of the Chinese Christian Fellowship of Righteousness in the United States, commented that this is not the first time that a dictatorship attempts to rewrite the Bible. In Nazi Germany, Hitler published his version of the Bible, replacing Moses’s Ten Commandments with Nazi’s twelve, adding: ‘Respect your Führer and master. Joyously serve the people with work and sacrifice. That is what God wants from us!’”