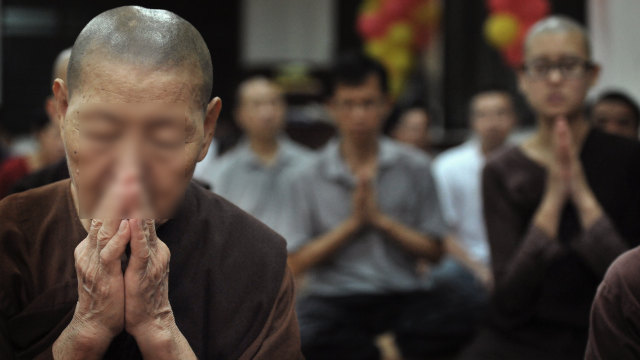 Even the most innocent faith-related practices or rituals may cause troubles with authorities in present-day China.

Ever since the implementation of the new Regulation on Religious Affairs, any act of faith has come under scanner in China. Not only are believers rebuked or harassed for their actions, but they are also threatened to the point of paranoia.

In early September, the police arrested more than 20 elderly Buddhists in Donggang city of northeastern Liaoning simply for reading scriptures together in one of their homes. To show their heft, the officers arrived in four cars and came armed with guns. They claimed that all private religious meetings had been prohibited by the state and seized the group’s books, under the pretense of checking if they had anti-Party content in them.

Among the arrested Buddhists, more than ten out-of-town Buddhists were taken to a police station for questioning, while locals Buddhists were made to register their information on the scene, and next day, they were called in for questioning and were threatened that if they don’t give up their faith, the next three generations of their family will not be allowed to serve in the Chinese army or seek a government job.

An eyewitness from the village revealed that he heard the Buddhists singing songs praising the Party in the police station. He said, “The songs saved them. The police took the singing as the sign of support for Mao Zedong and released them.”

Another villager said that the government’s policies are becoming increasingly difficult to understand and follow. Speaking about some previous arrests, he said, “When these old ladies have nothing to do, they sing together and recite Buddhist scriptures. This does not mean that they oppose the Communist Party. Why arrest them?”

The level of control over religious belief in China is such that even the most innocuous faith-related act may result in huge problems with authorities. Li Gaizhen (pseudonym), a Buddhist from Taiyaun city in the northern province of Shanxi told Bitter Winter that since March, her daily life is monitored only because her religious status had been registered in official records.

In May, she decided to buy some fish from the market and release them into a nearby lake as part of the Buddhist practice known as Life Release. She was called immediately into the police station for questioning, and the deputy director intervened personally to “learn about her situation.”

She was questioned at length about her faith and told that by releasing fish into the water, she had caused “disturbance to the public order.” She was later forced to sign a document guaranteeing that she was no longer a Buddhist. Given such intense scrutiny for even the minutest aspects of her life and faith, Ms. Li now lives in fear of authorities and possible implications against her family.