Starting on Sunday, independent groups and individuals will go to the streets for six weeks (at least) to break the silence on the CCP’s persecutions in Xinjiang. 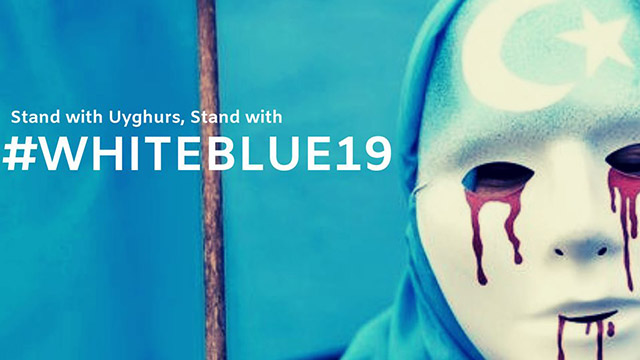 We have reached a paradox: Everyone is speaking about the horrendous situation in Xinjiang, and big politics is simply ignoring the fact. Of course, the US Department of State is raising its voice, and many other countries are speaking out as well, but at the same time, too many governments remain mute or even support China in its repression of Uyghurs and other Muslim Turkic ethnicities in Xinjiang Uyghur Autonomous Region (XUAR).

The reaction to these cruelties and insensibilities come then from civil society, and this is all the more significant.

There is, in fact, a group of friends who just decided that enough is enough and launched a remarkable initiative of public protest. It is called #WhiteBlue19, and starting from July 21, activities will take place simultaneously in many cities of the world. The full schedule of events is available on their Facebook profile. The White and Blue of the name are the colors of East Turkestan, the name which many Uyghurs prefer to Xinjiang; and 19, of course, stands for the year 2019. The event is going to be informal, as its participants will attempt to draw attention to the repressions in Xinjiang by marching, chanting, and dancing in the streets.

Bitter Winter has talked to one of the organizers, Mr. Matt Tucker, a young American activist from Valley Forge outside of Philadelphia – the historic site of the famous encampment where George Washington’s continental army spent the winter of 1777-1778 during the US War for Independence. A famous painting depicts him kneeling in prayers in the snow before taking the field against the British troops.

“I was very sick in my 20s,” comments Mr. Tucker who will turn 29 at the end of July. “All I could do for many years was lay in bed, read and feel bitterness and resentfulness. I started to feel better about a year ago and was having a hard time finding work. I always wanted to help people, so I decided to stay at home and do charity work. I fought back against resentfulness and bitterness, and now I feel really good, and I will feel fantastic when the Uyghur people are reunited with their families, are free, and this new way of people connecting online and going around old ways such as slow governments is in place!”

There is no official organization behind it. “We are just regular folks across the world,” says Matt. “Also, there are no real ‘leaders’ of this movement. It is time for regular people from all walks of life to connect online and fight for peace and liberty,” Mr. Tucker points out. “We the people can bring about peace really fast!” Americans will recognize the line “We the people” as the very beginning of the US Constitution. 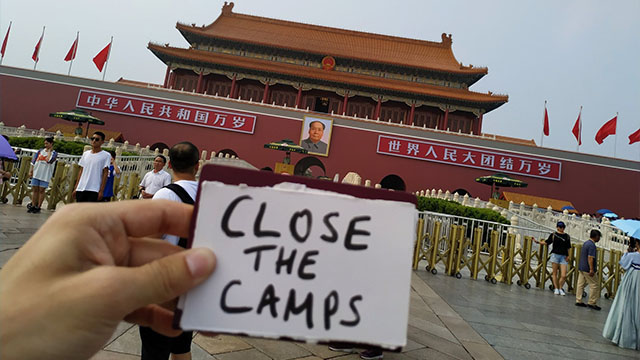 Mr. Tucker’s informal group is nonetheless collaborating with the major names of the Uyghur diaspora like the World Uyghur Congress in Munich, Germany, and the American Uyghur Association. “All rallies will be different depending on the city,” adds Mr. Tucker. “The local organizers have control and ownership over their own protests, but everyone will wear white and blue, and try to connect with different groups. There are many: in Taiwan, Hong Kong, Tibet, Sudan, and Venezuela; places of the world where people know the real meaning of repression and sorrow.”

Starting from Sunday, the initial campaign will last six weeks, and its aims are big. “At that time, college students will get back, and we will promote and market it to them. Once they get involved, these protests will not stop until Uyghur people are free,” says Matt enthusiastically.

They are aiming high, and they mean to accomplish much. Some supporters managed to smuggle pictures of the #WhiteBlue19 campaign to the heart of the red dragon – Tiananmen Square – of all places!