At the Ministerial to Advance Religious Freedom organized by the U.S. State Department in Washington DC, high-tech companies supplying components to Chinese surveillance systems are told that this is immoral—and should be illegal too.

The Largest Religious Freedom Event in the World 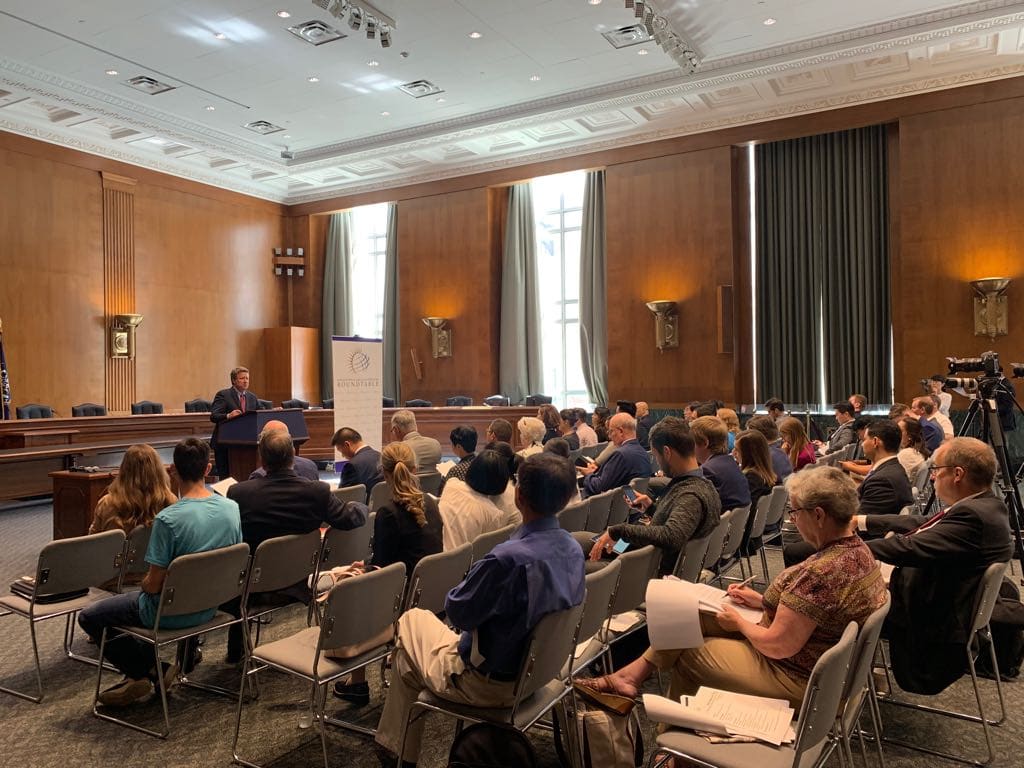 The Ministerial to Advance Religious Freedom, now in its second edition, is the largest religious liberty gathering in the world. Some 100 governments and 500 NGOs and religious organizations answered the appeal of U.S. Secretary of State, Mike Pompeo, and U.S. Ambassador-at-large for International Religious Freedom, Sam Brownback, to work together for religious freedom. The Ministerial includes a closed-door program for delegates and several side events.

Two emotional side events opened the Ministerial week in Washington DC on July 15. The Coalition to Advance Religious Freedom in China, which gathers together, under the aegis of Ambassador Brownback, groups suffering persecution in China, organized a seminar on Silicon Valley and China: The Rise of Religious Oppression Through Technology, chaired by Greg Mitchell, co-chair of the International Religious Freedom Roundtable. And several specialized NGOs co-organized an event on the Latest Development in China’s On-Demand Killing of Prisoners of Conscience for Organs. 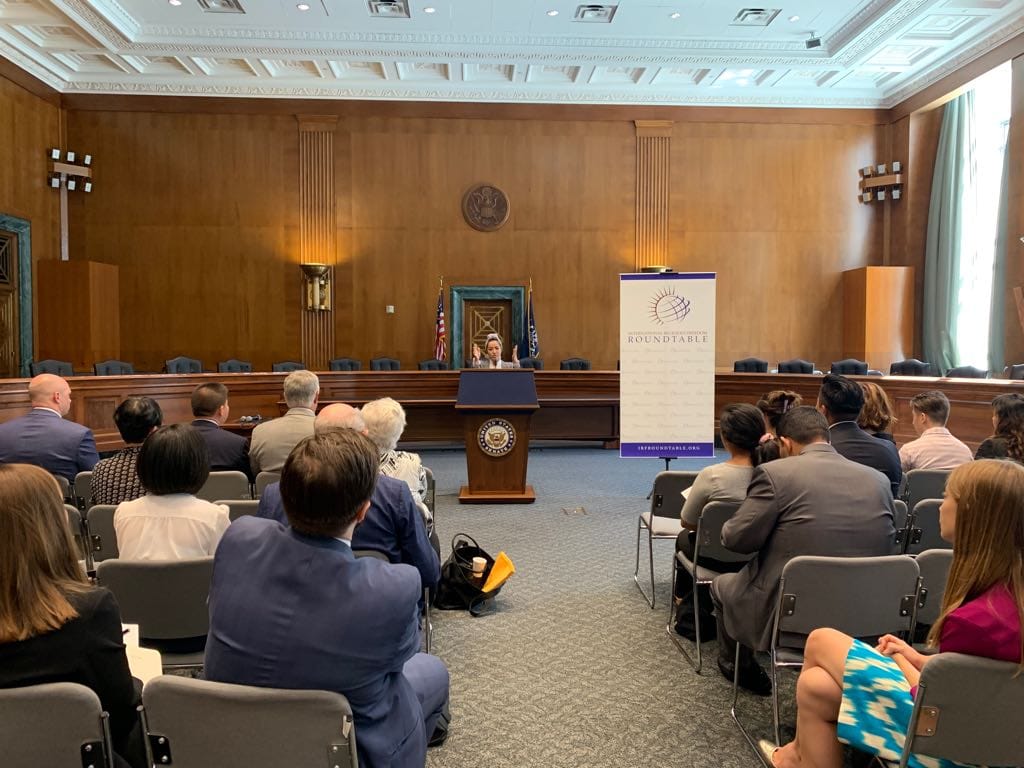 We all know that Uyghurs and members of other Muslim minorities, house churches Christians, practitioners of Falun Gong, members of The Church of Almighty God, Catholic conscientious objectors who refuse to join the Patriotic Church, Tibetan Buddhists and others are hunted like beasts, arrested, detained for years, tortured, and in some cases assassinated. What we do not completely know is the role of technology in allowing these crimes to happen.

Arresting religious and other dissidents and keeping them in high-security transformation through education camps  is facilitated by a global system of Orwellian tracking and surveillance. The CCP would not be able to implement this system without components sold to China by North American, European, Japanese, and South Korean companies, which make good money and do not ask questions about how their products are used.

This should be stopped, the Coalition told a packed room of the U.S. Senate Dirksen Building. The Coalition plans to write to the CEOs of the main high-tech companies doing business with China. If this would not be enough, it will ask for decisive governmental intervention. That companies from the free world make money out of the blood of the persecuted is totally unacceptable.

The room heard horrible stories of torture from Mihrigui Tursun, a 30-year-old Uyghur Woman whose infant son Mohamed died for lack of proper cures in a Xinjiang hospital while she was detained for no other crime than having spent time outside of China. Sister Zou Demei, whose story is well-known to the readers of Bitter Winter, explained how satellite and cell-phone tracking and tapping systems built with Western components were used to hunt her for 14 years, identify, arrest, and mercilessly torture another member of The Church of Almighty God mistaken for her because she used the same religious name, and find and arrest Zou’s elderly parents while her case was receiving international publicity—her mother died after five days of detention and torture. Sister Zou thanked the International Religious Freedom Roundtable and Bitter Winter for supporting her and preventing her deportation back to China. 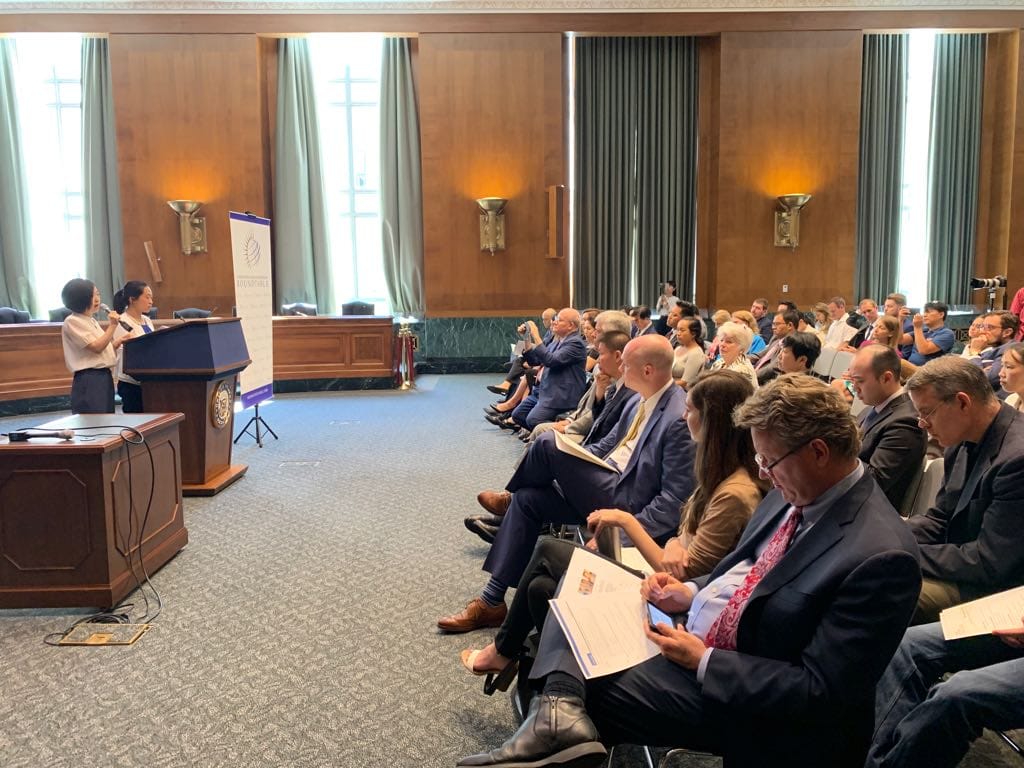 Sister Zou’s words were echoed by Ma Yongtian, a businesswoman and one of the main petitioners who went to Beijing from remote provinces to file petitions against corruption, only to be punished and persecuted. A statement was also read written by a Falun Gong practitioner, who offered further details on how technology is used to track down and arrest religious dissidents, who are then subjected to torture.

In the second part of the event, activists from different countries joined their voices to request that the flow of surveillance technology to the CCP be stopped now. “If you cannot do good, said Bob Fu, founder and president of ChinaAid, you should at least not do evil.” Luisa Greve, director for external affairs of the Uyghur Human Rights Project, summed up the efforts to introduce legislation that would make this technological assistance to the torturers illegal in the United States. Taiwan attorney, Tung Wen-Hsun, denounced the continuous, horrific practice of organ harvesting.

This practice was the central focus of a second side event, organized by the China Organ Harvest Research Center (COHRC), the International Coalition to End Transplant Abuse in China (ETAC), the Human Rights Law Foundation (HRLF), and the Citizen Power Initiatives for China (CPIC) at the National Press Club, chaired by Luisa Greve, and featuring international experts. The China Organ Harvest Research Center presented its 2019 Report and the movie Medical Genocide.

While the CCP spends huge sums of money to produce “scholarly” works by academics and other fellow travelers denying that organ harvesting is still targeting prisoners of conscience from Falun Gong, the Uyghur minority, and other persecuted groups, including The Church of Almighty God, the findings of the China Tribunal and other independent international investigations gave the lie to such attempts at denial. Dr Ann F. Corson  noted, however, that a network of pro-CCP media stubbornly refuses to report on such investigations and simply repeats Chinese fake news arguing that the practice has been stopped.

Unfortunately, organ harvesting is alive and well in China. Those who are not alive are the prisoners of conscience who are killed when their organs are needed for this most shameful of all traffics.