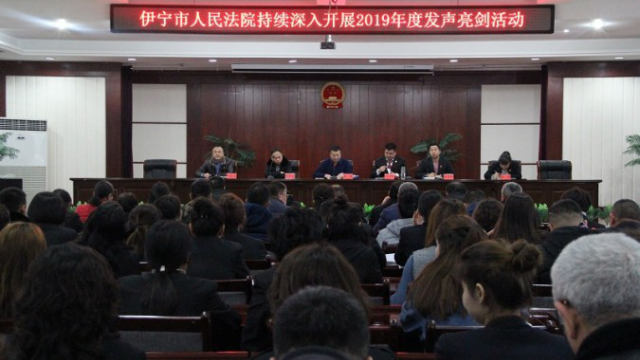 Using agricultural metaphors, authorities move to “excavate, reduce, and eradicate” their enemies by Cultural Revolution-like citizens reporting on each other.

In early 2017, authorities of the Xinjiang Uyghur Autonomous Region launched a campaign to “excavate, reduce and eradicate” the so-called “three forces” (terrorism, separatism, and religious extremism) and “two-faced persons” (those who are not truly loyal to the Chinese Communist Party). The campaign encourages citizens to report on each other, and all find themselves in danger as anyone can be targeted due to “guilt by association.”

On February 27, 2017, in an anti-terrorism rally, held in Xinjiang’s capital Urumqi, the region’s Communist Party secretary Chen Quanguo said that Xinjiang could not be in peace without eliminating the existing dangers of terrorism. The campaign to “excavate” (as in to dig up dirt, or dig down to the root of a problem), “reduce” (reduce the threat), and “eradicate” (that is, to shovel out the bad soil, pull things out by the roots) perceived threats to the regime was launched. On the same day, over 10,000 persons that were present at the rally, including regular and public security police, as well as grassroots militia and reserve forces, got on the vehicles and headed for assigned areas across Xinjiang to carry out “stability maintenance” mission.

Almost two years later, some locals in Xinjiang told Bitter Winter about their experiences with this campaign to “excavate, reduce, and eradicate.”

One instructor at a university in Xinjiang reported that after the launch of the campaign, Party officials first gave students and teachers an opportunity to confess: Anyone who had participated in religious activities, visited religious venues, or partaken in religion-related matters could explain themselves. If they proactively acknowledged their behavior, they could “avoid” punishment.

But avoidance of punishment does not necessarily mean what one might expect, as the instructor explained. “‘Exemption from punishment’ doesn’t mean there won’t be any punishment. It depends on whether you tell the truth, and whether it is the whole truth. In the future, if someone provides evidence against you again and mentions things that you haven’t confessed, the punishment on you will be increased.”

The instructor told Bitter Winter that in early 2018, a university in Xinjiang had already “dug up” at least 50 people, and more than 20 people were punished at the time. Retired teachers have not been spared. In minor cases, these people lost their bonuses for one year. In severe cases, they were sent to transformation through education camps. Sometimes, people have been “dug up” merely for possession of Islamic books.

This excavation, reduction, and eradication campaign has long exceeded the scope of eliminating “violent and terrorist forces.” The most effective aspect of the operation to excavate, reduce and eradicate is to have people report each other, “dig deep” into ideological problems, and uproot the government’s enemies – even if these people have nothing to do with the so-called three forces.

One government worker in southern Xinjiang told the reporter: “A work unit arrested more than 20 Uyghurs in one operation. Any Uyghurs who have watched videos about the ‘three forces,’ who have been to underground scripture halls, or who have participated in pilgrimages to Mecca – even if they went 30 years ago – will be arrested. When one person is arrested, they are coerced to provide the names of others whom they know. Public security officers will investigate anyone who has been in contact with them by phone. Many more Uyghurs have been arrested as a result. There is an unwritten rule here: As soon as the government believes that there is a problem with an Uyghur, his or her parents, children and grandchildren will all face restrictions. As a result, Uyghurs no longer leave southern Xinjiang to find work elsewhere.”

The campaign to excavate, reduce and eradicate has also been implemented with respect to the “home-stay” program (in which government agents are forced to live with Muslims and watch their every move at home). One home-stay program document previously disclosed by Bitter Winter demands that home-stay personnel assist the communities in reporting anyone who has a good relationship with persons “involved in violence or terrorism, religious extremism, or cases of illegal teaching or studying of scripture.”

Another means to excavate, reduce, and eradicate, is the torture of Muslim detainees to get the names of religious Muslims. According to an insider at a transformation through education camp, some places have even stipulated “excavation, reduction, and eradication quotas” for detainees. In other words, detainees must provide the names of several other individuals who are suspected of being “involved in terrorism” to complete their “transformation” and be released.

One Uyghur mother told Bitter Winter that her son was locked up in a transformation through education camp last year for using the mobile app Zapya. The police said that the reason they kept him detained was that they wanted to continue “excavating, reducing and eradicating.” The police explained as follows, “For example, if there is an ‘extremist’ in your family, he will be detained first. Then, he will gradually be questioned, and the people he knows and communicates with will be ‘disposed of’ one by one. People in other families will be ‘disposed of’ in this fashion. Ultimately, all of the government’s enemies will be eliminated. This is ‘destroying the branches and roots.’”

There are fears that such requirements to report on others, on the basis of quotas and fear of punishment, will result in numerous false charges and injustices. Extreme pressure coming from authorities only makes the risk of false charges higher. As an example of the pressure, locals cite an article published on December 3, 2018, on the official website of Xinjiang’s Development and Reform Commission: “Guide the entire village to proactively swear allegiance to expose and report people; vigorously carry out activities to ‘excavate, reduce, and eradicate;’ and carry out ‘exposure, self-reflection, propaganda, and condemnation’ on a mass scale.” The article further claims that local authorities have used this method to punish twelve “two-faced persons,” and purified the Party members of the village organization. At the same time, the article states, well-behaved villagers are encouraged and called upon to move close to the Party organization proactively.

In March 2018, a report on the Party members swearing allegiance, issued by Xinjiang’s Forestry and Grassland Bureau, mentioned the need to “establish a sound working system to report and expose people, engage in heart-to-heart chats, and hold people accountable; promptly discover burgeoning, tendentious and potential leads; and continue to carry out the campaign to ‘excavate, reduce, and eradicate,’ fully digging out and eradicating hidden and dormant ‘two-faced persons.’”

In February 2017, the website of Xinjiang’s Shule county issued a report calling for the “in-depth launch of the campaign to ‘excavate, reduce, and eradicate,’ and continuously dig deep and severely crack down, like digging up alfalfa, cleanly and thoroughly rooting out the breeding ground of hostile elements.”

These techniques – and the metaphors used to describe and promote them – remind many of the Cultural Revolution. Xinjiang’s government website is filled with rhetoric encouraging people to report and expose each other to the authorities and to criticize and denounce people publicly. During the Cultural Revolution, the CCP encouraged colleagues, friends and even married couples to report and expose each other. In 1958, at least 300,000 citizens who made veiled criticisms against the authorities were reported and exposed; they were branded as “rightist” in the class struggle and subjected to political persecution. As Bitter Winter has previously reported, some so-called “two-faced persons” were reported and sentenced to 20 years in prison merely for going on a pilgrimage 23 years ago or for failing to stop “reactionary speech” at a funeral.