Alongside millions of persecuted Muslims, CAG members are also sent to internment camps. Those who are not are indoctrinated at home to renounce their faith. 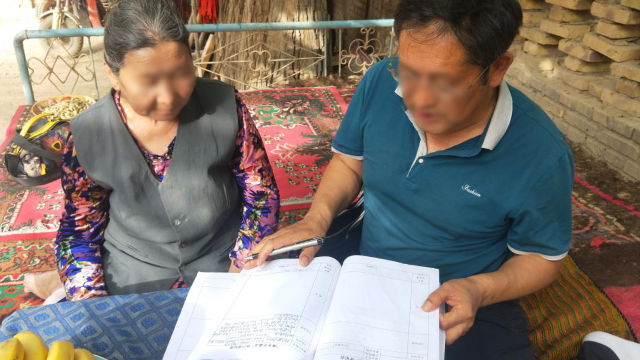 The Church of Almighty God is the largest Christian new religious movement in China; it has been included in the list of the xie jiao since 1995 and is severely persecuted because of its rapid growth, which the CCP treats as a threat to its regime.

According to the “2018 Annual Report on the Chinese Communist Government’s Persecution of The Church of Almighty God,” more than 11,000 CAG members were arrested across China last year. Among them, at least 248 were detained in Xinjiang Uyghur Autonomous Region. The numbers may be even higher, but because of the tight surveillance and monitoring in this prison-like region, where human rights and religious freedom have been mercilessly trampled on, it is impossible to compile detailed statistics.

What follows are stories about two families from Xinjiang who have been persecuted merely because of their faith.

A 3-year-old child left with no parents

From November 2018 to January 2019, at least ten CAG members in the region of Korla, the second-largest city in Xinjiang, were arrested and had their homes searched by the government.

Among the arrested was a married couple who were detained after the police raided their home at midnight. Being a member of the CAG is a very serious matter, officers claimed, and the government can sentence them to prison for as long as they please – there is no upper limit to their sentences. The couple’s three-year-old daughter has been left in the care of relatives. Ever since her parents were taken away, the girl cries inconsolably as soon as evening falls. She often implores her grandfather to go out and look for her mother. The child yearns for her mother but doesn’t know when she will be able to return.

We’ll indoctrinate you in your own home

At the end of last year, a CAG member from Xinjiang’s Shawan county was arrested and eventually locked up in a transformation through education camp for her faith. On the day of the arrest, county government officials came to the woman’s home to question her family about her belief and took photos of them all. The officials stayed at her home for five nights in a row to ensure her family members didn’t have any “feelings of resistance.”

The woman’s ailing mother in her seventies, also a CAG member, didn’t escape the government’s persecution as well. Personnel from the government-run poverty alleviation task force that was stationed in the village came to her home to “transform” her ideologically, i.e., force her to renounce her faith by promising to aid her financially, as part of the nationwide poverty alleviation program.

Officials brought along rice, noodles, and oil to help them persuade the woman. They ordered the woman to read texts with anti-religious, blasphemous content. She told them that she is illiterate. “If you don’t read, we’ll come back every day and teach you one word at a time—until you’re able to read and write them,” the officials threatened.

To put psychological pressure on the woman, the officials also posted a notice on her door that the arrest and detention of her daughter was in accordance with the relevant provisions of the “special operation to crack down on violent and terrorist activities in Xinjiang.” The woman was demanded to learn and understand CCP’s policies.

Almost every day, officials came to her home to take photos with her, pressuring her to renounce her faith again and again. Since she wouldn’t obey, the officials threatened to lock her up in a transformation through education camp, like her daughter. Despite frequent threats, the woman refused to give up her faith.

The woman’s family members were also dragged into the “transformation process.” They were told the woman’s daughter detained in the camp would suffer more if her mother wouldn’t give in to the government’s requirements. If they actively cooperated in persuading the elderly woman, her daughter could be released a bit earlier, the officials promised. Hoping to help their relative in detention, the whole family started persuading the woman to agree to whatever the government wants her to say or do.

Because of constant surveillance, the woman’s movements are also strictly controlled. Ever since her daughter was arrested, she has been required to ask for permission to leave the village, even to visit a relative.

The woman requires a lot of medications for her health condition. Unable to work, to sustain her basic needs, she relies solely on the financial assistance from her relatives and what she gets from the rent of about an acre of unfertile land. Her relatives wanted to take her to live with them, but because of the constant visits by officials to “transform” her and the requirement to attend the flag-raising ceremony in the village every week, she is unable to move.

Constant indoctrination and “transformation,” the loss of her personal freedom, and pressure from her loved ones have made the woman’s life unbearable and had a toll on her health.