Relatives of The Church of Almighty God members who are sent to internment camps are surveilled by the state and forced to undergo “political conversion.” 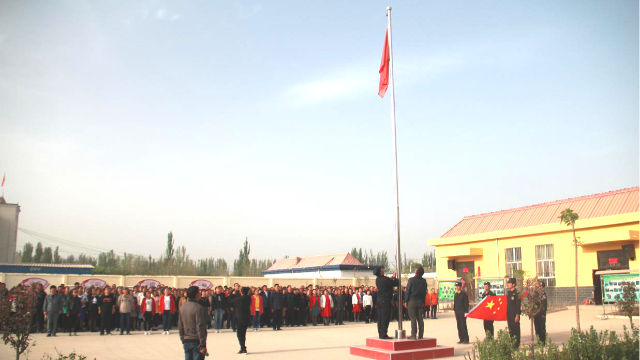 The high-pressure control policies that the CCP is imposing on Xinjiang’s Muslim minorities are also being transferred on to other societal groups. Members of The Church of Almighty God (CAG) – the single most persecuted religious group in China – in the region have also become key targets of suppression and are increasingly locked up in transformation through education camps. As soon as someone ends up there, their loved ones not only will have a hard time finding anything about them: they will also be threatened and intimidated, authorities trumping on their fundamental rights and human dignity.

“I just know that she is in a study class [transformation through education camp]. As for the exact location, no one knows,” the husband of a detained CAG member said helplessly. After his wife was arrested, he contacted acquaintances, trying to find out anything about her whereabouts. In Xinjiang, where everyone is afraid of being detained, no one dared to do or say anything about the matter. The man still knows nothing about his wife.

The mother of a CAG believer told Bitter Winter that after her daughter was arrested last April, she had visited a local police station and community offices repeatedly, in an attempt to find out what had happened to her. Not only was she deprived of her right to know the whereabouts of her daughter, but she was also refused to visit her, and the police blacklisted her phone.

Regardless, desperate to find her daughter, the woman continued asking officials where her daughter had been taken, was she still alive. However, even her plea to pass her a change of clothes was denied.

Many other relatives of the arrested CAG members were threatened by the police not to search for their loved ones. “Looking for them won’t be beneficial for you,” the police warned.

Three categories of loyalty to CCP

According to a report by Human Rights Watch, in Xinjiang, the CCP scrutinizes the level of Turkic Muslims’ political loyalty by dividing them into three categories: “trustworthy,” “average,” and “untrustworthy.” Those deemed “untrustworthy” are detained in transformation through education camps. Those in the remaining two categories will continue to be subjected to surveillance and indoctrination.

This policy has now been widely applied to CAG members and their relatives; the latter often attributed to the groups of the “average” or “untrustworthy.” As a result, designated officials move into their homes to monitor and “transform” their ideology.

The wife of a CAG member from Hotan prefecture who is detained at a transformation through education camp told Bitter Winter that last December, just three hours after her husband was arrested, two officials from the county committee moved into her home. They observed and monitored her and her family’s each and every move under the guise of “reassuring the relatives.” Four days later, more personnel were sent to her home every day to learn about her husband’s and other family members’ religious beliefs. All conversations were recorded.

Local officials ordered her to cooperate with the government, since they are using a scoring system to measure her adherence to state’s requirements. If she agrees to cooperate and does it well, she will receive a high rating – and perhaps her husband can be released a bit earlier. If she doesn’t – she will receive a low score, which would be unfavorable to her husband. The daily harassment and surveillance eased only after her household was rated as “trustworthy.”

The family members of another arrested CAG member experienced the same ordeal. The police said bluntly that all family members, including the husband, children, and parents, have been categorized as either “average” or “untrustworthy,” and are now targets of government surveillance. They must also report to the local police station whenever leaving the local area.

This kind of coercion and guilt-by-association policy makes her feel depressed and miserable. “It’s as painful as if there were a dagger in my heart,” the woman lamented.

“The government forces people down a dead-end road. There is no freedom or human rights at all,” one of the relatives complained.