After her husband was taken by the CCP police and “disappeared,” Nafisa became a de facto widow and fled to Turkey. Life is not easy for Uyghur refugees there.

They say that time heals but time is doing little to heal the agony and despair of Nafisa, a Uyghur woman for whom each passing day, week and month is like a knife plunging ever deeper into an open wound.

Arriving three years ago in Turkey with nothing except a few bags, a 13 year old son and 4 year old daughter, her journey to Istanbul began in a hurry as Uyghurs’ passports were being confiscated at an alarming rate by the Chinese government in Xinjiang. With her son’s passport having a mere six months to run, she was left with no alternative but to make her escape.

Life was becoming increasingly difficult for anyone who took Islam seriously or who wanted to dress modestly. “I wasn’t asking to cover myself in black,” she said, “simply to wear a normal head scarf and a long dress with sleeves down to my wrists.” She said that women like her were beginning to be picked up on the streets and criticized for their modest clothing. “I saw the writing on the wall,” she said. “The local committees started to station women at the end of streets and were on the lookout for headscarves of any kind.” “I was doing absolutely nothing wrong. Just going about my daily life peacefully and legally. But now even my clothing had become illegal,” she complained bitterly.

She remembers with tears flowing freely the harsh winter of 2016. Traveling from Ghulja, a city in Xinjiang Province’s far west, bordering Kazakhstan, to the capital in December with a “permission to travel, a so called Green card” she felt like a stranger in her own land. “Imagine needing a special permit to travel out of your own city in your own country,” she said. Uyghurs from out of town were not admitted into hotels and relatives and friends were forbidden to host visitors. Sleeping illegally on floors and small grubby hotels for two months, she remembers the bone-chilling cold that neither she nor her children could shake off. She eventually managed to join a tour group heading to Dubai, from where she escaped to Turkey.

“I remember watching a cat stretching out outside a shop in Dubai and feeling the envy rising within me,” she said. “Imagine feeling jealous of an animal that could be so relaxed and free in its own land,” she cried. “I sat in that sun for three days and breathed in the freedom and the warmth.”

As for her husband, he had already disappeared from their home in Southern Xinjiang three years before in 2013 during one of the many round ups of Uyghurs she witnessed over the years. “No one knows where thousands of our young men have gone,” she explained sobbing uncontrollably. “The roundups didn’t just begin two years ago. Camps have existed for years,” she said. “My husband was just a simple carpet weaver. We had little but we had enough,” she said. “ How is it that he became an enemy of the State and was taken away?” she asked.

When her children ask about their father she has to tell them that he is dead. “What else can I tell them?” she said. “ Even I don’t know if he is alive or dead.”

They are settled in Turkish government schools but as the days go by and the news from home becomes bleaker, assimilation into the Turkish nation could not be further from their minds. “We belong to Xinjiang,” she said. “Why are the Chinese doing this to us? Turkey has been good to us but we are not from here.”

A Difficult Life in Turkey

Sometimes she tries to forget the past and busies herself with everyday tasks. But the past haunts her every day. She worries whether a people can be wiped off the face of the earth. “This is not just a religious battle fought by China,” she complained. “This is about the disappearance of an entire ethnic group.”

She explained the Uyghur people’s exceptionally close affinity with each other, and particularly their families, which makes the current situation so difficult. She said they do not easily assimilate or mix with other people. Most of the Uyghur diaspora have had no contact with their homeland or anyone there for the past two years. Uyghur WeChat users (the sole Chinese social media app) have been forced to sever all contact with relatives and friends abroad for fear of almost certain detention were they to continue communicating with those outside. “The pain of not knowing what has become of our parents and relatives is unbearable,” she explained. Because we don’t have our own land we rely on each other perhaps more than other people,” she explained. “All we have is each other. The thought that we might never see or hear from them again is a torment I can’t describe. I feel as if I have been torn into a million pieces,” she said. 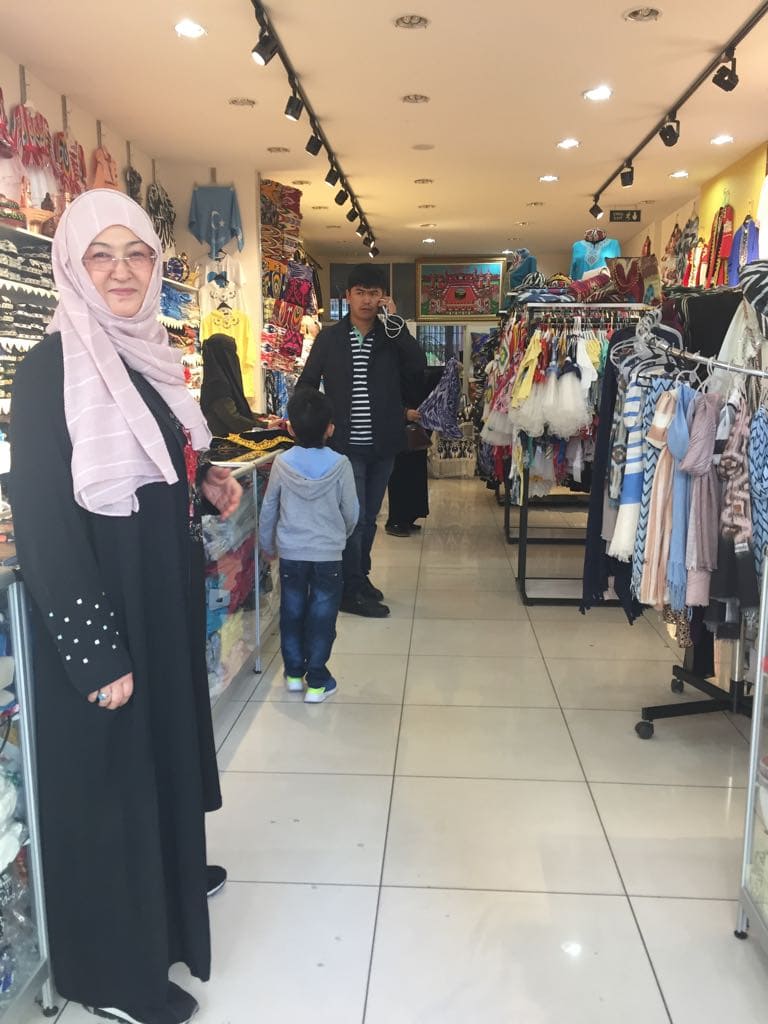 Mehrigul, a “widow” herself, manages a shop in Zeytinburnu run by Uyghurs to support “orphans’ and “widows” in the community.

Because of this the agony of separation from loved ones and their home towns is palpable. Nafisa describes it in physical terms. “The simple thought of what has happened and is happening now is a sharp pain that never goes away,” she said. “For the first two years I couldn’t stop crying,” she said. “I used to go into a room and scream and throw things against the wall.” Now for the sake of her children she tries to look forward. “But I worry about their future and what will become of them.”

Whilst Turkey has become an open door for Uyghurs and after the riots in Urumqi in 2009 those who escaped automatically received Turkish citizenship, today it is a different story. “There is great uncertainty now,” said Nafisa. “With Turkey’s increasingly close relationship with China we worry that we could be sent back at any minute.” She said that even after five years it was still difficult to get Turkish citizenship. “Some of us are having to pay huge bribes to get a passport these days. It’s not automatic at all,” she said.

Uyghurs in Turkey have done their best to recreate a flavor of home in Zeytinburnu and other suburbs of Istanbul. They have their own bakers from Kashgar that turn out steaming flat bread; their own “tibibs” from Hotan that specialize in Uyghur herbal medicine, stocks of the Uyghur national brightly colored ikat “atlas” fabric, now made to order in a Turkish factory and seamstresses who will make clothes to order. But the aching longing for home, particularly when everyone has a tale of loss to tell, never goes away.

Nafisa is not alone in her grief. She has simply joined the ranks of hundreds of “widows” and “orphans” marooned in Turkey, whose future is unclear and who daily live with the insatiable grief of separation from the land and culture that they love, but to which they can never return.