Highlighting the strong connection between the persecution that the CCP wages against religions and the 1989 massacre. 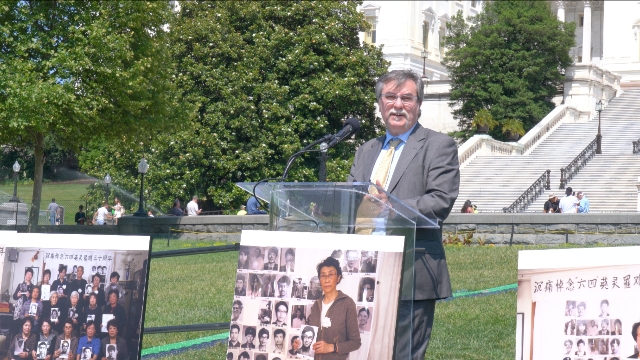 This is the full text of the address given by the Author at the Tiananmen Square Massacre Rally of Remembrance held on June 4, at the West Lawn of the United States Capitol in Washington. D.C. The event was organized by the Victims of Communism Memorial Foundation. Bitter Winter was present as one of its many co-hosts and the event was attended by several speakers of different religious persuasions and political inclinations representing over 20 human rights organizations . A few US politicians also addressed the crowd, and Ms. Nancy Pelosi (D-CA), the Speaker of the House, came unscheduled to the event.

Ladies, Gentlemen, it is for me a real honor to address you on this important event commemorating a fatal circumstance. Thirty years ago the Chinese Communist Party, or the CCP, who ruled China then and continues to rule today, ordered the brutal and merciless massacre of many people, mostly young students. Western sources speak of 10,000 killed in cold blood.

Now, the brutalizing Communist government of China is still there, ruling harshly on millions and millions of people, denying many liberties, treading on human rights, persecuting religious faith. The CCP doesn’t discuss theology, doesn’t even care about it. The regime persecutes all religions alike. We at Bitter Winter chronicle this vast injustice every day online in eight languages.

In fact, there is a strong connection between the persecution that the CCP wages against religions and the massacre in the Tiananmen Square.

It is generally acknowledged that Tiananmen was a powerful factor in generating a religious revival in the whole country when the brutal repression on the square had persuaded many, if not most, that the CCP was incorrigible.

In the meantime, after Tiananmen, the CCP dispatched its best scholars to Eastern Europe to understand how all this might have been possible. They concluded that religion had been the single most critical factor in mobilizing the masses against the Communist Parties in several Eastern European countries. So, this idea became mandatory reading for all cadres at the Central CCP School. The new generation of CCP leaders grew up being taught that the Communist system in Eastern Europe had collapsed mostly because of religion, and that the control and repression of religion was mandatory for China to avoid following the same fate.

Mr. Xi Jinping, the present general secretary of the CCP and the president of the People’s Republic of China, is one of them. In fact, repression of religion in China is actually getting worse under him. The new Regulation on Religious Affairs that came into force on February 1, 2018, is the most restrictive in decades. Xi Jinping is fully persuaded that Tiananmen’s lesson is that religion may destroy Communism if it is not kept under strict control.

Ladies and Gentlemen, this country, America, has been built on the opposite idea. Liberty is the heart of people, and religious liberty, enshrined in the First Amendment of the US Constitution, is the first political right of a citizen. It protects the right to believe and to live with one’s faith in public.

Let me then paraphrase the First Amendment here, today: “Red China shall make no law respecting an establishment of religion, or prohibiting the free exercise thereof; or abridging the freedom of speech, or of the press; or the right of the people peaceably to assemble, and to petition the Government for a redress of grievances.”