The remembrance rally of the Victims of Communism Memorial Foundation sent a clear message to Beijing on the 30th anniversary of the bloodshed. Bitter Winter was there. 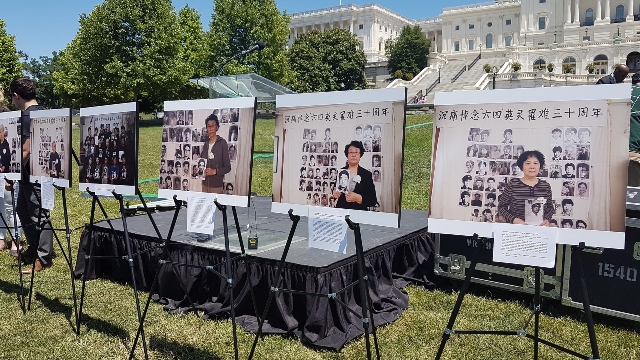 Many people like to say that communism is dead and belongs just to the past. Unfortunately, millions and millions of Chinese citizens have sound reasons to contradict this imprudence. The (blessed) fact that the Eastern European Communist regime of the so-called former Soviet bloc crumbled in 1989-1991 doesn’t authorize anyone to call for an undocumented, unattested, and unarranged disappearance of Chinese Communism. This is just the wishful thinking of too many a Westerner, eager to forget the harsh Chinese reality in order to devote themselves to profitable trade with the tyrants in Beijing, that is, calling for a future that hasn’t come yet. But it will, for sure, and perhaps earlier than one, both in China and in the West, may think, said Dr. Lee Edwards at the Tiananmen Square Massacre Rally of Remembrance held on June 4, at the West Lawn of the United States Capitol in Washington. D.C.

The event was organized by the Victims of Communism Memorial Foundation, an educational and human rights nonprofit organization founded in 1994. The foundation erected a Memorial to the world victims of communism in Washignton, D.C., authorized by an unanimous Congressional Act and dedicated by US President George W. Bush Jr. on June 12, 2007, the 20th anniversary of President Ronald Reagan’s (1911-2004) “tear down this wall” speech in front of the Berlin Wall. The Foundation is convinced that communism has been a crime against humanity and still is a vast, deathly plague; as one gentleman in the audience wearing a Solidarność t-shirt showed on a signpost: “Socialism equals genocide”.

Edwards, Distinguished Fellow of Conservative Thought at the B. Kenneth Simon Center for American Studies at The Heritage Foundation of Washington, D.C., the author of 15 books and the Chairman of the Foundation, coordinated the event alongside his colleague, Ms. Kristina Olney, Director of Government Relations.

Several speakers of different religious persuasions and political inclinations representing over 20 human rights organizations, took the floor one after the other, with the shining white Capitol on their back and under a blue-sky sunny day, mildly announcing summer – a natural splendor that many took as a sign of good hope for human rights in China.

Ms. Reggie Littlejohn, president of Women’s Rights Without Frontiers, gave a vibrant speech on the CCP’s “one-child policy,” which imposes state abortion on families after the birth of their first child, recently transformed to a “two-child policy” that “has not stopped [the]slaughter,” concluding that “this is the hallmark of communist regimes – the peacetime killing of their own citizens.”

Then Ms. Kristina Lantos Swett spoke. The daughter of Tamás Péter Lantos, known as Tom Lantos (1928-2008), a Hungarian-born American Democratic representative for California who devoted himself to the defense of human rights, she is the president of the Lantos Foundation for Human Rights & Justice, and she called for a bipartisan approach to these dire questions.

Survivors of the Tiananmen massacre brought then a personal and touching feeling to the event, through their memories, sorrow, and expectations. Notably, Mr. Chen Guangcheng, the famous blind lawyer who escaped house arrest in China, as well as the man who probably is the world’s best-known Chinese Christian, Mr. Bob Fu, president of ChinaAid, and previously a student leader during the 1989 Tiananmen Square demonstrations.

Bitter Winter was present at the event as one of its many co-hosts. And yours truly gave a few remarks underlying the pivotal role that religion had played in the understanding of CCP’s leaders of why communism in Eastern Europe fell, and thus, served as an excuse to crush mercilessly all religious groups and individual believers in the thirty years after, as a way to exorcise the same fate in Communist China.

A few US politicians addressed the crowd. Representative James P. McGovern (D-MA), chairman of the US Congressional-Executive Commission on China, Representative Christopher H. Smith (R-NJ), vice chair of the same agency, and Representative Andy Levin (D-MI), Member of the House Foreign Affairs Committee’s Subcommittee on Asia, the Pacific and Nonproliferation, described the horrible situation of many ethnic groups, citizens and believers suffering today under the CCP rule, remarking that no business, although legitimate, that the US should do with China, should ever sacrifice human rights. 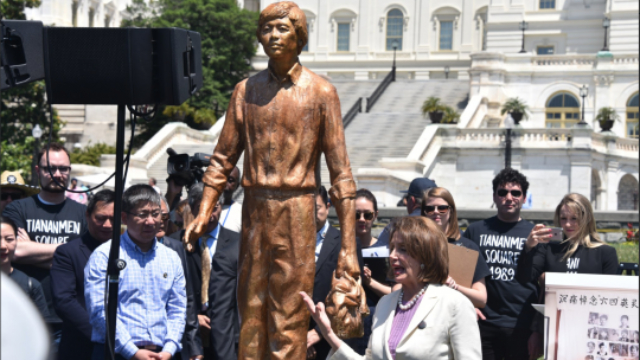 Ms. Nancy Pelosi (D-CA), the Speaker of the House, came unscheduled to the event, recalling the day when she and other members of the Congress took a commemorative trip to the Tiananmen Square in 1991, amidst suspicions and surveillance by the CCP. She committed herself to the defense of human rights and called for the immediate suspension of all malfeasance by the Chinese regime. She was then given the honor of unveiling a statue of the “Tank Man,” inspired by the famous photograph of a Chinese civilian blocking a convoy of tanks.

At the rally, people could also see the moving exhibit of pictures portraying the “Tiananmen Mothers” whose children had been brutally murdered on that square. They are aging, most of them died, but they will never walk alone. It’s, in fact, a moral duty for everyone to stand by their side and take the torch of freedom from their withering hands, renewing its strength. One the highest moment of the rally was when “Tiananmen Mothers” were presented the Truman-Reagan Medal of Freedom by Ms. Marion Smith, Executive Director of Victims of Communism Memorial Foundation, and the Medal was accepted on their behalf by Ms. Mi Ling Tsui, Communications Manager at Human Rights in China organization.

Attended by a sizable audience, and covered by many TV networks and other media, the event has been a success. Not in a self-congratulating, indulgent, and patronizing sense, like in a sentimental, a little bit tacky nostalgic reunion; but because it sent a clear message to Beijing. If communism is alive and kicking in China, so are dissenters, activists, and observers. People oppressed by the regime can forgive but can’t forget. The blood of the Tiananmen martyrs calls all to keep on fighting until the final liberation. A clear message is now written in the sky of the world, coming from Washington. No crime can go unnoticed; no trespassing will endure forever; justice will prevail. It’s just a matter of time.