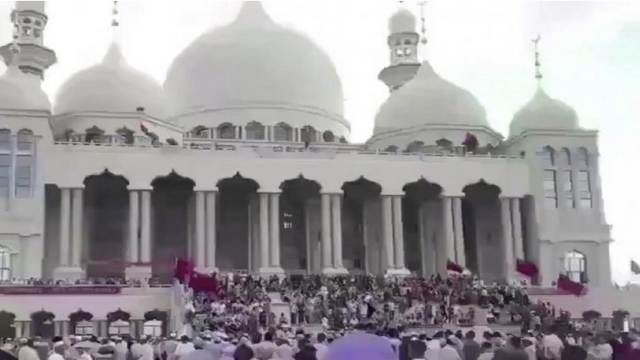 The demonstration of August 8, 2018, with 30,000 Muslims preventing the demolition of a mosque outside Xinjiang, proves that China is cracking down on Islam per se, not on “Uyghur separatism” only.

It is very rare to attend a human rights conference throughout the world without hearing somebody mentioning the famous poem “Then, They Came for Me” by German Lutheran pastor Martin Niemöller (1892-1984):

Then they came for the Jews, and I did not speak out—
Because I was not a Jew.

Then they came for me—and there was no one left to speak for me.”

Less often noted is that totalitarian regimes too learn from Niemöller’s poem. Actually, they induce groups that are not yet persecuted to support the persecution of other groups. They do not realize they will be next. Totalitarian regimes always apply the old motto of King Philip II of Macedon (382-336 BCE), the father of Alexander the Great (356-323 BCE), which the Romans translated as “divide et impera,” “divide and rule.”

For example, the Chinese Communist Party (CCP) recruits Christian House Church pastors to support its persecution of groups listed as xie jiao. When these pastors will no longer be useful, they will also be arrested, and this has indeed already happened in the past.

We are witnessing in these very days how this strategy works in the Chinese Muslim community. The two largest groups of Muslims in China, each with an estimated population between eight and ten millions, are the Uyghurs and the Hui. Most Uyghurs live in Xinjiang. Hui are distributed all over China, although prevalently in the northwestern part of the country. There are Hui Muslims living outside China and ethnical Hui who are not Muslim, but the great majority of Hui is composed of Muslims living within Chinese borders.

Both Uyghurs and Hui have a history of revolts against Chinese Imperial power. The Hui rebelled repeatedly against the Qing dynasty. However, the CCP built a narrative opposing the Hui and Uyghurs (whose relations had often been tense even before Communist rule, as they speak different languages and follow different interpretations of Islam). The CCP presented the Uyghurs as “bad” Muslims, separatist and inclined to terrorism, while the Hui were the “good” Muslims, integrated into the official system. In Tibet, where there is a sizeable Hui Muslim minority, the regime fomented the tension and created incidents opposing Hui Muslims and Tibetan Buddhists. Conversely, some Hui leaders supported openly the repression of Uyghurs in Xinjiang and Buddhists in Tibet.

For Chinese propaganda, the Hui were very important. They “proved” that Uyghurs were persecuted because they were “separatist,” not because they were Muslim. In fact, the CCP insisted, Muslims who are loyal to the Party and not “separatist” or “terrorist” are not persecuted, as the case of the Hui demonstrated.

All this is now coming to an end. The amendments to the laws on religion that came into force in 2018 signal a deep hostility, and announce massive crackdowns, on all religions. International media reported that in Linxia, an Islamic region in western China’s Gansu province with a massive presence of Hui, entrance into mosques had been strictly forbidden to minors (just as entrance into Christian churches elsewhere in China), all religious education has been prohibited, and loudspeakers calling to prayers have been removed for all the mosques in the area.

It was easy to predict that Hui mosques demolition would soon follow, just as Uyghur mosques are demolished elsewhere. In August 2018, the government took step to demolish the large Grand Mosque in the town of Weizhou, in Ningxia Hui Autonomous Region. On August 8, 30,000 Huis gathered to protect the mosque in a massive demonstration that took the government by surprise. The protest continued in the following days, until on August 10 a spokesperson for the local government read a document to the crowd announcing that plans for demolishing the mosque would be “delayed.” The document did not guarantee the mosque would not be demolished.

Some Hui leaders, and others in China, may now rightly apply to themselves Niemöller’s famous poem:

“… they came for the xie jiao, and I did not speak out—
Because my religion was not classified as a xie jiao.

Then they came for the Uyghurs and I did not speak out—
Because I was not a Uyghur.

Then they came for me—and there was no one left to speak for me.”