Throughout 2019, the year marking the 60th anniversary of the Battle of Lhasa that brutally ended Tibet’s autonomy and forced the Dalai Lama to exile, the CCP has been intensifying the eradication of Tibetan Buddhism all over China by destroying religious symbols and demolishing temples.

As Bitter Winter reported earlier, the United Front Work Department (UFWD) in the northern province of Hebei ordered in March this year to thoroughly investigate the spread and development of Tibetan Buddhism, in preparation for further crackdowns. Ahead of the upcoming visit by the central government’s religious work inspection team in the autumn, local authorities throughout the province stepped up their suppression efforts.

The government of Zunhua, a county-level city in Hebei, started preparing for the visit by the higher-ups in the summer. Shengquan Temple (translated literally as “Holy Spring Temple”), built in 2004 and popular with worshippers, was among the targets for rectification.

City officials scrutinized the temple at least eight times, changing its look and confiscating books on Buddhism. In August, the temple’s nine white stupas – the commemorative monuments that usually house sacred relics associated with the Buddha – were painted yellow, and their golden peaks were removed. This way, the officials claimed, the temple was “sinicized,” i.e., made more representative of Chinese Buddhism. 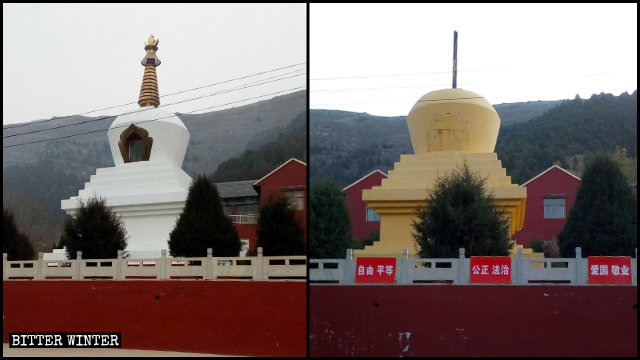 A local Buddhist monk explained to Bitter Winter that Tibetan Buddhists build stupas as a means to cultivate virtue and accumulate blessings. According to him, the temple’s abbot – a lama from the northwestern province of Qinghai – was immensely grieved to see the stupas rectified. Therefore, on November 12, he had all the peaks reinstalled on the stupas, and their bodies re-painted white again, without the government’s permission.

The next day, the provincial religious inspection team came to the temple, and officials flew into a rage seeing the stupas restored to their original appearance. They immediately ordered to oust the lama from the temple. Two days later, several dozen special police officers, led by the head of the Zunhua Public Security Bureau, stormed into the temple to implement the order.

Just days before the central government inspection, the government of Zunhua city arranged an excavator to destroy the temple’s stupas. A fire truck was brought to dismantle one of the stupas, which was 30-meters-tall. Some Buddhists tried to intervene, but police officers suppressed them. On November 17, all nine stupas were turned into ruins, and a Tibetan Maitreya statue in the temple was covered.

The monk that Bitter Winter talked to also revealed that three lay Buddhists were handcuffed and taken away in a police car for attempting to prevent the lama from being driven out. “China is the domain of the Communist Party,” the monk added. “Those who seek ways to fight against it will find themselves on the road to ruin.”

A government insider told Bitter Winter that the Hebei Province government’s crackdown on Tibetan Buddhism is in full swing, as all its religious symbols are banned without exception.

Tibetan Buddhists in other areas of China are also subjected to severe government attacks. In southern China’s Guangxi Zhuang Autonomous Region, a stupa in Anfu Temple in Du’an Yao Autonomous County, administered by Hechi city, was painted grey, and the beams on its base covered with concrete. The “rectification” order came from the county’s Ethnic and Religious Affairs Bureau, demanding to remove Tibetan Buddhist elements within a set timeframe. Otherwise, the temple would be subjected to a more severe crackdown.

Ironically, after the forced changes were implemented, a banner was displayed at the base of the stupa: “The people have faith, the country has power, and the nation has hope.”