China’s treatment of the Uyghur people is “one step away from a holocaust,” according to British Muslims who gathered to express solidarity in London. 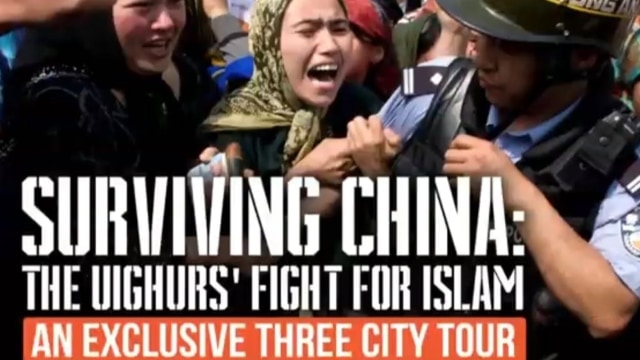 Table of contents: Witnessing in the UK – The Camps as Tools for a “Genocidal Policy” – Uyghurs in Guantanamo: The True Story – An Obstacle to Belt and Road – Accounts of Torture and Persecution – Abandoned by Fellow Muslims Overseas

Witnessing in the UK

A three-city tour of the UK entitled “Surviving China,” organized by the Muslim advocacy groups CAGE and 5 Pillars, traveled to Birmingham, Manchester, and London calling Muslims to wake up to the “escalating genocide of their brothers and sisters” in the Xinjiang autonomous region.

Featuring amongst others, former Uyghur Guantanamo inmate, Khalil Mahmut, and exiled journalist Rukiye Turdush, the team spoke out about conditions in the Uyghur homeland and raised awareness about the deteriorating situation among their people.

The staggering growth of the transformation through education camps since 2016, sheer numbers incarcerated, detention of inmates’ children in orphanages and fears of organ harvesting were highlighted by former President of the Canadian Uyghur Society, Ms. Turdush, who has had no contact with her own family for two years. Because of her advocacy work in the West, and previous employment with Washington-based Radio Free Asia, 31 of her cousins have been arrested and interned, one even dying in a camp during the past month.

Azad Ali, CAGE’s Community Relations Officer, introducing the meeting warned the audience that the subject was an emotional topic for Uyghurs and that the purpose of the meeting was not simply information giving, but a “call to action.” “These are real people with real stories to tell,” he said. He wanted to raise awareness of the little known or understood Uyghur cause and he hoped the three-city tour might help people understand how false accusations of terrorism have been used “by despotic nations to carry out oppression.”

China, Ms Turdush said, tried to exploit the Western fear of terrorism by claiming that all Uyghurs who practice their faith or are critical of the CCP are terrorists. “How can the entire Uyghur population be terrorists?” she asked. “That is ridiculous.”

Turdush traced the “genocidal policy” in Xinjiang, which she prefers to call East Turkestan, as many Uyghurs do, claiming “Xinjiang” is a “colonialist” name imposed by the Chinese, to the days of Chairman Mao, when his essays written in 1949 expressed a similar ideology. He had stated that all the territories outside the Great Wall the Chinese Empire once controlled should be annexed, and the non-Han population, their race, their culture, and their religion, should be assimilated by China. “I see this as the same motivation of the current government,” she said. “Ten years ago the cultural genocide began,” she said. “But I feel the actual genocide has begun during the past two years.” She asked why China had initially denied the existence of the transformation through education camps, but once the evidence was irrefutable, the truth about them was hidden and distorted. “Why do they have to do this?” she asked.

Uyghurs in Guantanamo: The True Story

There has been a tragedy within the tragedy in China’s persecution of Uyghurs. 22 of them were detained in Guantanamo by the U.S. between 2002 and 2013. Their situation became the object of an intense debate in the U.S. media, and was finally solved by the U.S. judiciary, who ordered them released. According to an editorial opinion published by the Boston Globe in 2009, the Uyghurs escaped Xinjiang and tried to reach Turkey and Europe. Due to the war in Afghanistan, they stopped and lived in Afghan villages that had a population of Uyghur origin. When the war made their situation too dangerous, they moved to Pakistan. There, villagers were aware that they would receive $ 5,000 for each “terrorist” turned over to the U.S. They lured several Uyghurs to visit a mosque, where they were arrested and ended up in Guantanamo.

U.S. federal judges determined that none of the 22 Uyghurs participated in combat activities on the side of the Afghan Taliban or co-operated with al-Qa’ida. A handful sought military training in the hope, or dream, to use it in the future against China. Most didn’t, and were only trying to escape persecution in Xinjiang. It took a decade for the U.S. to realize this because until a few years ago, the world was buying the Chinese narrative that most Uyghurs were supporters of terrorism. Fake news about the detainees was constantly fed to the U.S. and other countries by China, and the issue was not taken seriously until the last few years when the real situation in Xinjiang started to become known in the West.

Khalil Mahmut, who was eventually released to Bermuda, spoke of his cynicism about China’s motives regarding the 22 Uyghurs who had been detained in Guantanamo and said Beijing was still being less than honest today. “It was convenient for them to stigmatize us as terrorists,” he said, adding that accusations of terrorism over the past twenty years have been the perfect smokescreen for clamping down on his people. Several members of his family in Xinjiang have been imprisoned for their practice of Islam, such as buying land for a mosque, sending their children to underground religious schools, growing a beard and wearing Islamic style clothing. “In reality, we are not terrorists, we just want to live our lives and observe our religion peacefully,” he said.

An Obstacle to Belt and Road

According to Ms. Turdush, the presence of a majority of Turkic speaking, Sunni Muslim Uyghurs, Kazakhs, Kirghiz and Uzbeks on the western flank of China, interferes with Beijing’s expansionist ambitions into Central Asia and Europe. “Their motivation,” she said, is to pursue the Belt and Road Policy of reviving the ancient Silk Route.” “If Beijing can’t control East Turkestan, their imperial dream will be impossible,” she said. “They worry about losing this land.”

Describing the deteriorating situation for religious belief in Xinjiang Ms. Turdush said that the practice of Islam was now all but banned. “People are forced to denounce Islam, mosques have been demolished or closed down, and those still standing have the Chinese flag flying above the doors.” She spoke of this year’s Chinese New Year celebrations in which Uyghurs usually do not take part, during which 24 new pork outlets were opened in Hotan, the most religious area of the province and 144 tons of pork were distributed to Uyghur households.

“Korans, prayer mats and religious books have been burned,” she continued. “No one is even allowed to keep religious books or teach religion to children,” adding that the practice of circumcision and funeral rites were also severely curbed. She said that government figures admitted that ten percent of Kashgar’s population had been interned, rising to forty percent in Hotan. “And camp numbers are increasing,” she said.

Accounts of Torture and Persecution

Eyewitness accounts of torture inside the camps were heartbreaking, she said, citing Uyghur woman Mihrigul Tursun who was eventually released because she had an Egyptian passport, but not before suffering three periods of imprisonment and losing one of her triplet infants in mysterious circumstances. She was tortured with electric shocks to the extent that she developed seizures, and witnessed nine deaths in her own cell of 68 prisoners in a three-month period.

Ms. Turdush described the torture Uyghurs are being subjected to as not simply physical but mental and emotional, and affecting also those still living “freely” in Xinjiang, who live in daily fear of arrest. “Whilst the Uyghur population makes up only 1.5 percent of the Chinese population, they account for 21 percent of all arrests,” she said. “No one feels safe.”

She spoke of the tragedy of children of those arrested who are no longer allowed to stay with relatives, but are rounded up, and placed in State orphanages bulging at the seams, which they cannot leave. “They are not allowed to speak their native language and have to assume a Chinese identity,” she said. “The aim is to break the Uyghur lineage, their roots, and connections with their culture. Who knows what their future holds or whether they will be able to return?”

She described life outside the camps as one of fear and intense surveillance, and the intrusion into most Uyghur homes of 1.6 million Han Chinese cadres, sent to live with and spy on them for days at a time, added to the “horror, helplessness and mental destruction.”

Adding insult to injury, Ms. Turdush complained that Uyghurs also felt abandoned by their co-religionists around the world, who had sold out to China for the sake of economic benefit. “The Muslim countries of the OIC (Organization of Islamic Co-operation) have put state interest first,” she complained, “by refusing to oppose China’s treatment of Uyghurs.”

“Islamic governments are defending China’s crimes,” she protested, and urged individual Muslims to boycott “Made in China.”

“I believe in the power of individuals,” she said, urging the audience to think of ways they could stand up to China. “No civilized nation attacks innocent children, imprisons people like this, or makes them disappear,” she said. “But China is doing this.”

Both she and Mr. Mahmut described the relentless mental anguish that all Uyghur exiles feel being cut off from their friends and relatives, from their culture and their homeland.

“They have wiped out my childhood, my memories,” she said. “This kind of attack on each Uyghur is unimaginable and intolerable.” She said the result of losing all touch with their loved ones is creating a host of severe mental imbalances and symptoms related to stress disorders within the Uyghur diaspora. The impact on all of us is huge. We cannot sleep, we cannot think straight, and we cannot eat. We are being tortured too,” she said.

Summing up the event, the CAGE outreach director Moazzam Begg, urged Muslims to protest against Islamic governments around the world giving into China for economic gain. Some have even betrayed Uyghurs living in their countries, by handing them back to China. He cited Imran Khan, Prime Minister of Pakistan as a case in point when he publicly denied all knowledge of the internment camps for Uyghurs.

“There is a lot we can do,” he pleaded. “Prayer, of course, is powerful. But we must also apply pressure on all who trade with China.” He urged Muslims to write to their MP’s, to flag up the issue at their local mosque communities and be aware of their buying habits. “2.3% of all Chinese exports come to the UK. Don’t buy them,” he entreated.

He asked them to use social media, to write their own stories, to become citizen journalists. “We are in a unique position to learn that this is going on and to do something about it,” he said, earnestly calling on them to “stand with our Uyghur brothers and sisters who are feeling isolated and unsupported. They must know they are not alone.”