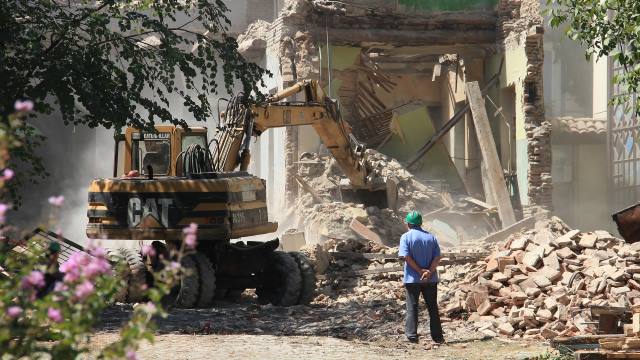 At least 400 Christians have been left in a lurch as the authorities have shut down their churches, including several Three-Self Churches.

On May 6, the personnel of Xinhu’s Fenyi county as well as the local village secretary visited the Zaomushan village’s Three-Self Church. The church members were ordered to move their properties elsewhere, and an excavator was brought in to demolish the church forcibly. By next morning, the place was in ruins, and almost 100 Christians were left without a church.

According to an internal source, this demolition was carried out because the church was located near the tomb of Xi Zaochi, a historical figure in China. The current Chinese President, Xi Jinping, is believed to be his 55th generational descendant. Government officials on various levels often visit the tomb to pay their respect and found the church en-route to it to be an “eyesore.”

By May 23, the government stationed a cadre, Mr. Li Qi, to supervise a Three-Self church in Shuixi town to oversee the proceedings. Apparently, the reasons for doing so were that “if too many people believe in God, no one will listen to the Communist Party.”

In June, a Huatian Three-Self church was shut down, and a Shabei church was targeted.

Come July, the deputy head of the Shuixi police station, Hua Dong, and the brigade cadre charged into the Jiangjia Three-Self congregation site. They issued the order to shut it down immediately. Several of the elderly church members are unable to walk much further, and so they requested for the church to remain open at the site. However, Mr. Dong only berated them in response.

In the end, he claimed that the church was being shut down as the structure was weak and might collapse any moment but that is factually incorrect as the building is quite sturdy.

A week after this incident, three local public employees charged into the Xiashanqiao Three-Self Church in Luofang town. The officials removed the church’s electronics and seized their benches, tables, stereos, pianos and other objects. The church was a gathering place for over 100 Christians.

In all these incidents, a total of 400 believers have been left without a religious place to practice their faith. It is telling that the Chinese government is undertaking such attacks on state-sanctioned churches even. These actions further lead to questions about the future of religious freedom in China.