The widespread acceptance of Christianity in China has already overtaken that of Marxism-Leninism, and many university teachers and students are Christians. Undoubtedly, this has caused the Chinese Communist Party (CCP) authorities to panic, resulting in an endless stream of campaigns to prohibit missionary activity and boycott religious beliefs on campuses in mainland China. Often, school authorities threaten the professional futures of students and teachers to try to make them renounce their beliefs.

University class teacher removed from his position for his belief

Xin Yi is a Sola Fide (Justification by Faith) Christian. He worked as a so-called “class teacher,” a position responsible for overseeing a large group of students as they progress through their education, at a college in Shandong Province’s Zibo city. When he was hired and was filling out the standard personal information form for new employees, he admitted that he was a Christian. In September 2018, as part of a crackdown on religion on campus, the school administration relieved him of his duties as a class teacher.

According to sources, his dismissal from the position was based on a document adopted by the college’s administration the same month, stating, “missionary activities and Christian college fellowship activities are absolutely not allowed on campus. Teachers who insist on preaching religions and are incorrigible must be transferred out of their teaching posts. In cases where the circumstances are especially serious, the teacher will be fired. Teachers who hold religious beliefs cannot serve as class teachers.”

Although he was dismissed from his position as a class teacher, Mr. Xin did not abandon his faith. School administration repeatedly pressured with Mr. Xin and demanded that he change his thinking, or else his faith would affect his future prospects for being promoted to a higher position. 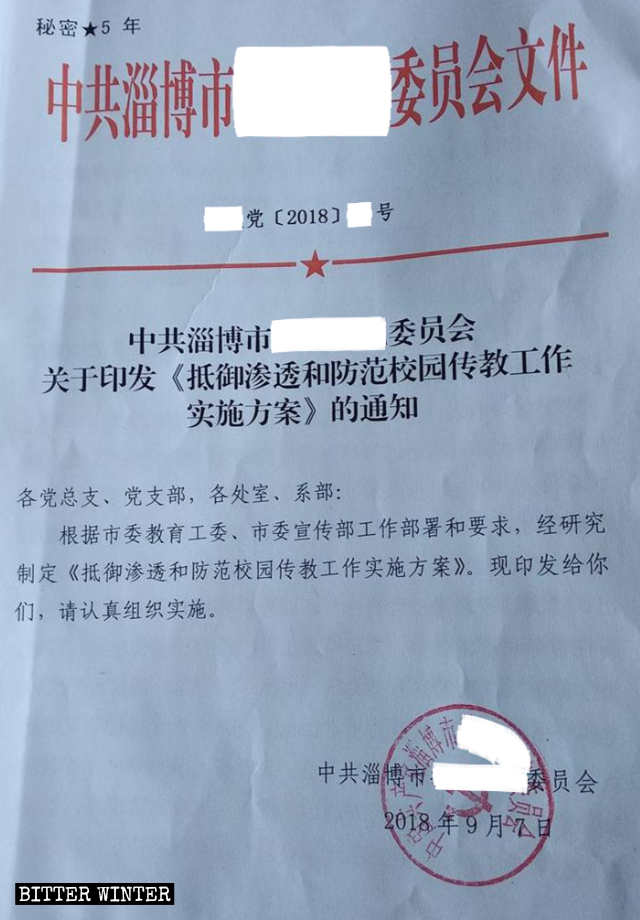 Zhang Xin is a Christian student at a university in Zibo city. Because of her religion, the department counselor confronted her repeatedly, and demanded that she sign a statement renouncing her faith on the grounds that her “identity as a member of the Communist Youth League is in conflict with her religious faith.” In early October 2018, the counselor warned Ms. Zhang, “No religious belief is allowed at school. In the future, you cannot send anything related to religious beliefs on WeChat or QQ [Chinese messaging apps].”

In mid-October, the counselor came to speak with Ms. Zhang two more times and threatened her, saying that if she adheres to her faith, she must withdraw from the Communist Youth League.

When Ms. Zhang expressed her decision to withdraw from the League, the counselor said, “If you withdraw from the Communist Youth League, it will have a big impact. The school will put this information in your file. When you join the workforce in the future, it will affect you throughout your life.”

The repeated attempts made by the department counselor to convince Ms. Zhang to give up her faith put her under extreme emotional stress, compounding the stress she already felt as a busy student.

According to Ms. Zhang, some Christians at other colleges have been expelled from the Communist Youth League or stripped of their Party membership because of their religious faith, while others have received a demerit as punishment. She believes that today, all Christian university students face a choice regarding their religion.

On October 23, 2018, the secretary of a school in Daqing city forwarded the orders of superiors on WeChat, demanding that the religious beliefs of students and of faculty members who are Party members be investigated and that a list be compiled and submitted to the Education Bureau. The statement made clear, “[The authorities] absolutely do not allow Party-member teachers to hold religious beliefs or promote religion! No religion-related content is allowed to be disseminated at school.”

The school secretary also stressed that if a teacher “violates the rules,” they will be removed from the frontline of teaching. In addition, the secretary ordered all faculty members to fill out a “Religious Status Questionnaire” and “Religious Statement of Commitment,” promising to promote atheism diligently and oppose belief in God; not participate in or promote any religion, and promptly report other faculty members’ or students’ participation in religious activities; not read or keep any religious quotations, religious books, or religious propaganda, not listen to religious broadcasts; and so on.

On November 9, the school received another notice from the Education Bureau. The notice stated that religious belief and western culture are strictly prohibited from entering the classroom. Celebrations of all Western festivals are prohibited within the school, and all in-service teachers are strictly prohibited from forwarding in their “WeChat Moments” any content related to religious beliefs or Western festivals, or sharing information about festival-related events.

(All names in the article are pseudonyms.)