“It’s hell on earth!” That is how one Christian described the time he spent in a Chinese prison.

The infamous “re-education through labor” camps, called laojiao, instituted by the Chinese regime in 1957 and widely used for dissidents, devotees of banned religions, and real or suspected “counter-revolutionaries,” have been officially abolished in 2013. However, reports about the comeback of forced labor practices in China, with the government reaping profits, continue to surface. The emergence of these cruel practices has been recorded in Xinjiang’s transformation through education camps, with some countries, like the United States, launching investigations into whether goods produced by inmates in internment camps are reaching their markets.

But is not only Muslim Uyghurs that are enslaved into performing forced labor: People of other faiths do not only lose their freedom because of their belief but are also forced to manual labor under unbearable conditions.

Bitter Winter interviewed some previously imprisoned believers who recounted their painful experience of doing forced labor. The plight of believers tends to be worse than that of the average inmates. For the Chinese Communist Party (CCP), the “crime” of being a Christian seems to be more serious than that of thieves, robbers, arsonists, or murderers. 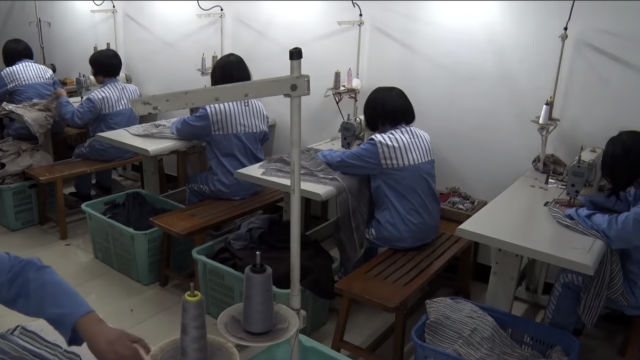 Before all else, the interviewed reported the huge quotas of work they were supposed to complete each day. Examples of such daily quotas included 3,000 cigarette lighter heads, or 1,000 pieces of underwear, or 4,000 matchboxes.

The former prisoners report that production managers increased the workload according to the situation. Zhu Jianyu (pseudonym), a member of The Church of Almighty God (CAG) who served a sentence at a prison in Henan Province, was only released in August 2018. He told Bitter Winter that, initially, when making small electrical transformers, he processed 3,000 units per day. Later, when making toys, he processed 3,500 units per day. His fingernails were worn off from overwork several times, and the skin on his fingertips peeled off layer by layer. As long as most prisoners were able to complete the task, their quota would be increased. Regardless of the prisoner’s age or physical strength, anyone who failed to achieve the quota had to work overtime.

Peeling cloves of garlic is another job that religious prisoners frequently encounter. Every day, they must peel 60 to 80 jin (30 to 40 kilograms). Often prisoners’ fingernails fall off, but they must continue peeling in intense pain.

The high expectations of output are met by similarly long working hours. Among the interviewed, the shortest daily work shift was 12 hours, while some worked 20 hours per day.

“During my two years and ten months of prison life, I sat on a bench for more than 10 hours a day,” said Wang Ming, a member the Association of Disciples, a religious group, designated as xie jiao, who was also released last August. “My back felt like it was going to break. Forget leaving the bench to move around for a bit; we weren’t even allowed to wipe away our sweat. I developed residual symptoms in my lower back. I still feel pain.”

“The work is not just hard labor,” said Zhu Jianyu. “We are always assigned to do something dangerous in prison. There was one brother from our Church who was assigned to apply glue. I don’t know what kind of poison that glue contained. When working, his eyes got so irritated that tears kept running down his face. By the time he was released from prison, his vision was seriously impaired. Now he can only see things up to five meters away.”

One Christian who was previously assigned to work in a brick kiln described his working environment. “The brick kiln’s temperature can reach 60 or 70 degrees Celsius (about 140-160 degrees Fahrenheit). If prisoners are careless, they will be scalded, and their hair will be scorched. The prison authorities do not provide temperature-resistant shoes. Prisoners must stand on one foot, shifting from the left to the right. If someone spends too long on one foot, he will get burned and develop blisters. New prisoners couldn’t even last for five seconds before having to run out of the kiln. But whenever the manager saw someone running out, he would flog them with a pipe.”

Heavy labor made this Christian think about death. One time, after he tried to commit suicide, the team leader disciplined him by beating him and shocking him with an electric baton.

The living conditions in prisons are deplorable. Prisoners often eat vegetable-leaf soup with insects floating in it. As a result of malnutrition, they often feel dizzy and do not have the strength to work.

To ensure that prisoners complete their work even when physically exhausted, the prison authorities resort to torture.

The interviewees report that prison guards incite the more vicious prisoners to discipline other inmates. Thus, it is common to be beaten by “prison bullies” when someone fails to complete the task. Mr. Zhu told Bitter Winter, “If a prisoner cannot complete their task, the prison guards will tie the prisoner’s hands and feet to an iron fence, and they are forced to stand continuously except during meals. Whether in winter or summer, they remain continually tied up for three or four days and aren’t allowed to sleep.” In order to avoid corporal punishment, Mr. Zhu had to work hard to complete his production task.

Another house church Christian reported that, when he did not complete his quota on one occasion, he was ordered to take off his pants outside in the winter. Every few minutes, cold water was poured over his head. Another time, the prison guard gathered all the prisoners who had not completed their tasks and beat them with a baton. For two months after the beating, he still experienced pain when breathing.

Excessive labor and corporal punishment inevitably lead to illness and pain, but prisoners often do not receive medical treatment.

In February 2015, Mr. Zhu’s blood pressure went up to 190, and he requested medical treatment. The prison guard demanded that he continue working, saying, “Lots of people are ill, so how can I give you the go-ahead?”

When other prisoners fall ill, they can receive a special “patient diet” with food better suited to their medical conditions. Mr. Zhu has a stomach ailment, and he submitted three written applications for a patient diet. He was never granted a meal easy on the stomach.

After five years and eight months of imprisonment, Mr. Zhu developed atrophy of his shoulder muscles. The doctor said it was caused by working in one position for a long time. Now, he has difficulty extending his arms and he suffers from muscle weakness. He is no longer able to perform heavy work.

Like Mr. Zhu, many other released believers have developed residual symptoms or even disabilities. Others died in prison.

On March 24, 2015, Xiangyun County People’s Court in Yunnan Province sentenced Wang Hongli, a CAG member, to five years in prison for “using a xie jiao organization to undermine law enforcement.” In prison, Ms. Wang’s assignment was to pack jeans and sew pants legs. If she didn’t fulfill her quota, she was required to work overtime as punishment. After two years, Ms. Wang’s weight dropped from 55 to 32 kilograms (about 121 to 70 pounds), and her face became so thin that her lips could not cover her teeth. Her collarbones were also clearly visible on both shoulders. When her family visited her, she cried and said, “I can’t take it anymore.”

According to a Christian who worked in the same production workshop as Ms. Wang, “Around August 2017, Wang Hongli had a high fever that didn’t subside. She couldn’t eat anything and felt weak all over. Later, when performing manual labor, she didn’t even have the strength to hold a pair of scissors. Despite this, the prison guards wouldn’t let her rest even for one day, and she still had to go to the workshop every morning to start manual labor. At 9 o’clock on the evening of October 1 in 2017, Wang Hongli passed away at only 42 years of age.”

(All names, except Wang Hongli, are pseudonyms).