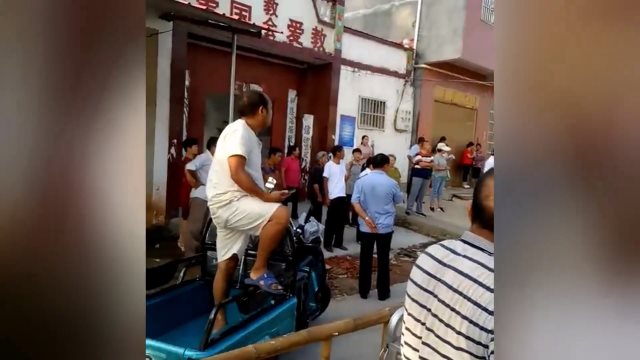 In two incidents from Henan province, authorities deployed a total of 70 officers to remove religious signage from government-approved churches.

On July 11, six local government officials in Henan’s Zhumadian city carried out an overnight raid at a True Jesus Church affiliated with the Protestant Three-Self Patriotic Movement. The purpose was to remove the words “True Jesus Church” secretly, without any interference from the believers.

However, the church administration followed the practice of deploying believers to keep vigil at night. That night, six believers were on duty. The officials had successfully removed one word when the believers on duty realized something was wrong. They raised the alarm and shouted, “the bandits have come.” Believers who lived nearby immediately rushed to the spot and seeing the members, and the officials fled in panic.

However, they returned the next day with more 50 officers from the local police station, urban administrative and law enforcement bureau. The deputy mayor of Huangbu town led the team. More than 20 vehicles surrounded the church premises now. They were not able to complete their mission and remove “True Jesus Church” signage in its entirety.

The believers present tried to record this activity, but their phones were snatched away by the police. To prevent further such raids, members of the church have decided to beef up the vigil and arranged for ten members to guard the church at all times. Believers will work in day and night shifts on alternate days.

Two days later, the government officials made a “surprise attack” at a Seventh-Day Adventist church affiliated with the Three-Self Movement in Caigou township of Zhumadian city. More than 20 police officers arrived at the scene to remove the word “Hallelujah” from the church’s entrance door.

The police also tried to arrest the believers and attempted at entering the premises using a ladder. However, this led to physical struggles between the police and the believers (video). Three elderly believers were injured as a result and were taken to a hospital. Rest of the members decided to live at the church for the time being.