Numerous questions remain unanswered about the deaths of two boys in Hunan Province. Instead of looking for answers, police persecute the aggrieved family.

On January 2, 2019, the lifeless, naked bodies of two brothers (eight-year-old Lu Yi and seven-year-old Luo Zhiqiang) from Wangxi village, administered by Shaoyang city in the central province of Hunan, were found in a creek. Law enforcement authorities hastily closed the case and focused their energy on suppressing the boys’ family and protesters against the government’s ruthlessness.

The cause of death seems suspicious

According to the family of the deceased boys, both victims had visible extravasated blood in their oral and nasal cavities and signs of trauma on their bodies. Lu Yi’s five teeth were missing. Bloodstains were visible on the snow where the bodies were found, but it appeared as if someone had attempted to cover them up. A hoe handle, electric wires, and cloth were also found concealed nearby.

There was a definite possibility that it was a homicide, and local villagers even provided leads on a possible suspect. However, on January 5, Longhui County Public Security Bureau announced that they were ruling out homicide as the cause of the boys’ deaths. On March 1, the police issued an official announcement, stating: “After investigating the surrounding area and questioning witnesses, in conjunction with test results, the Public Security Bureau has reached the following conclusion according to law: ‘Homicide has been ruled out. The deceased froze to death at the low-temperature, damp and chilly scene after removing the clothes of their own volition.’”

The announcement caused an uproar among village residents, people raising many questions: why would two children take off their clothes and stand at the scene of the crime until they froze to death and did witnesses really see them do that, as the police had claimed.

From April to May, the family of the deceased boys made two visits to Beijing to petition the government, but were turned away by officials from the Bureau of Letters and Calls and were forced to go home.

On May 13, the Public Security Bureau of Longhui county summoned eight relatives of the deceased for a “death case symposium,” which was held in a fully-enclosed conference room. To prevent any leaks, the police took away everything that the family members had with them, including their cellphones, portable audio recorders, and even pieces of paper.

After the meeting, despite the family’s requests and protests, the Bureau refused to file the case and investigate further, claiming that there was “no evidence that a crime occurred.”

On May 26, the family learned that central and provincial government leaders were coming to Longhui county to inspect how the campaign to “clean up gang crime and eliminate evil” was being implemented. The parents and paternal grandmother of the deceased boys decided to use this opportunity to present their grievances to the higher-ups. On the way to see the officials, the family members were intercepted by the police. The parents of the deceased boys were arrested.

The next day, nine relatives went to the county’s Public Security Bureau to demand the release of the boys’ parents but were threatened to be punished for breaking the law if they continued to appeal to the higher government.

The government’s disregard for human life and bullying of victims elicited anger from the public. Many people turned online to express their discontent but were quickly suppressed.

According to some accounts, at least 20 people were arrested for speaking out on behalf of the victims. Among them, Mr. Fan was detained for five days for commenting on the messaging platform WeChat: “Longhui county is supporting a bunch of evil and corrupt officials.” A netizen named Ms. Chen was detained for ten days for speaking out for justice, and Mr. Liu was kept in custody for ten days accused of “disturbing social order” for posting information online about his suspicions regarding the actual cause of the boys’ death.

On June 9, the boys’ paternal grandmother, with the help of other relatives, took to the streets to collect signatures for a petition letter, displaying photographs of her dead grandchildren. Many people signed the petition and donated money, but it all ended when five police officers showed up and forcibly snatched the petition and photos from the old woman.

Driven to despair, the woman bought a steel washbasin and walked around beating it as a sign of protest against injustice. 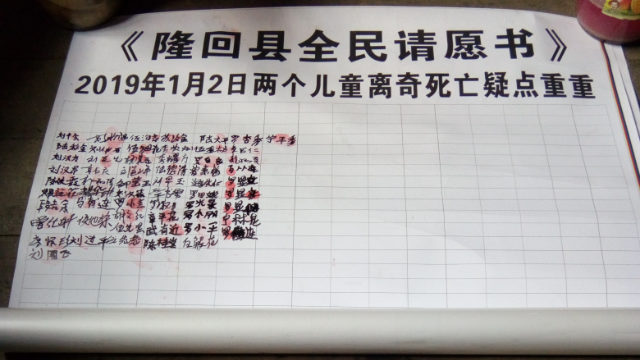 A police officer soon approached her and said that her grandchildren had died because of her belief in God. In response, she rebuked him for deliberately twisting facts and maliciously slandering her and continued to beat the washbasin, crying for her dead grandchildren and the injustice ordinary people face in China.