The most hideous crime of the Beijing Communist regime against dissidents and believers testified by witnesses in London. A final judgment is expected around May. 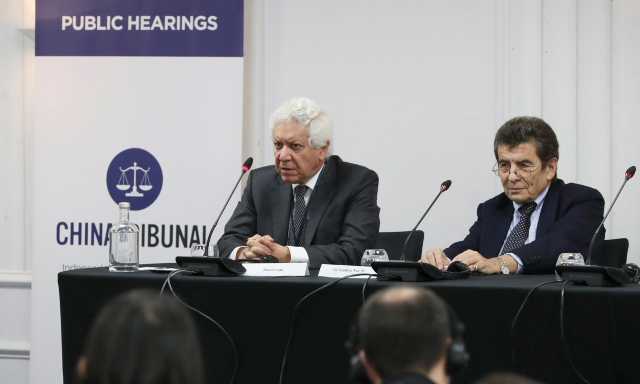 Evidence that has emerged during investigations into organ harvesting in China has compelled an adjudicating panel to make an interim judgment overwhelmingly against China. Taking the unusual step of releasing its provisional findings early, the London tribunal into forced organ harvesting in the People’s Republic has found “unanimously, and sure beyond reasonable doubt – that in China forced organ harvesting from prisoners of conscience has been practiced for a substantial period of time involving a very substantial number of victims.”

So persuasive were the testimonies, that presiding the Chair, Sir Geoffrey Nice, QC, took the unusual step of releasing interim findings before the final ruling, expressing his hope that in doing so, “the oxygen of publicity given to the allegations made and supported to the extent they are by our interim judgment, may allow the real oxygen of life to continue life itself in some who might otherwise be killed.” He expressed his public duty to “possibly save innocents from harm” by doing so, adding: “Reflecting on our several duties to fellow citizens of the world we can properly remind ourselves of past atrocities where states sought destruction of some part of their communities and recall the parts played in horrifying events that unfolded by others who remained silent.”

Sir Geoffrey, who was the lead prosecutor in the trial of Slobodan Milosevic (1941-2006), former President of Serbia, in The Hague, was commissioned by the International Coalition to End Transplant Abuse in China (ETAC) to head up the Independent Tribunal Into Forced Organ Harvesting from Prisoners of Conscience in China, held between December 8-10. He said that he hoped the Tribunal would give its final judgment in the Spring, but until then it was urging the People’s Republic of China (PROC) to come forward and put its side of the story.

In his concluding statement, he continued to appeal to those who might want to refute the findings and pressed them to come forward to defend the practice. He called for more evidence to either back up or refute the “compelling” witness statements before the final verdict was released. Despite damning testimonies from around the world, Beijing’s silence on the matter has been deafening.

Invitations delivered to representatives of the PROC to attend the hearings have so far fallen on deaf ears, but in his concluding statement, Sir Geoffrey pleaded for information which might contradict the interim judgment or suggest that nothing criminal has, in fact, been involved in China’s organ transplant practices. Before his final judgment was given, he said that he also wanted to hear from named doctors who have expressed favorable views about China’s transplant practices and who have so far declined invitations to assist the Tribunal. He urged them to reconsider their position to withhold evidence and to speak up for their own stance on the matter.

Three days of personal evidence to the tribunal came primarily from Falun Gong exiled practitioners (of whom it is estimated that tens of thousands have been harvested for their organs since Jiang Zemin, former President of China made it his stated purpose to rid China of their influence. Researchers such as Canadian human rights lawyer David Matas, former Canadian parliamentarian David Kilgour and US investigative journalist Ethan Gutmann – estimate that as many as 65,000 Falun Gong prisoners of conscience have been killed:  Ethan Gutmann, The Slaughter: Mass Killings, Organ Harvesting and China’s Secret Solution to Its Dissident Problem, New York: Prometheus Books, 2014.)

Uyghurs, whose precarious position has been highlighted in recent news have also come forward with their concerns. Together with irrefutable proof that between 1-3 million Uyghurs are now serving extrajudicial sentences in so-called transformation through education camps, or worse, the fact that the biometric data of the entire Uyghur population of Xinjiang has been gathered is worrying. (Reuters report of August 10, 2018: Gay McDougall, a member of the U.N. Committee on the Elimination of Racial Discrimination, cited estimates that 2 million Uyghurs and Muslim minorities were forced into “political camps for indoctrination” in the western Xinjiang autonomous region.)

Giving evidence, Uyghur doctor and former Xinjiang surgeon, Enver Tohti, who was once required to remove the organs of a live prisoner at the execution ground in the capital city of Urumqi talked about his concerns. These were compounded following the CCP offer of free health checks for all in the region which was announced in June 2016. The checks involved collecting biometric data from all Uyghurs in Xinjiang which has fueled his suspicion that this was in order to build a national database for the organ trade. “According to the Chinese media, the number of samples have been collected has exceeded 17 million,” he reported. (Human Rights Watch report of December 13, 2017. This report cites the Xinjiang Daily Newspaper report of 2017-11-02 which published the conclusions of the State ‘Physicals for all’ push to harvest biometric data from Xinjiang citizens between 12-65 from September 2016.)

His fear was that the camps were a cover for the organ harvesting trade. He said that to date many people have simply disappeared and only those who have proved too much a liability through sickness have been released. He described how in October 2017 on a visit to Taipei, he was approached by a Taiwanese man whose brother had traveled to Tianjin, on the north-eastern coast of China, for a kidney transplant. “Since he was aware of Falun Gong situation, he asked his surgeon not to have an organ from a Falun Gong practitioner. His surgeon assured him that: now, all organs are coming from Xinjiang!”

All bar one of the witnesses who gave evidence at the Tribunal, reported severe mental and physical torture on arrest, including in some cases sexual abuse and rape by other prisoners ordered to attack them. Each one reported undergoing full medical examinations, including blood tests and ultrasounds of their internal organs carried out on them. They all confirmed that other Han Chinese prisoners had not been subject to these tests.

An Israeli surgeon giving evidence at the Tribunal gave weight to the suspicions of harvesting by reporting that organs for transplant in China could be ordered a fortnight in advance. A patient of his who had urgently needed a heart transplant had been approached by his own insurance company undertaking to act as a middleman. A heart could be found, all costs would be paid by them, and the transplant would be booked for two-weeks-time.

Following 30 witness statements, Sir Geoffrey concluded by saying that together with issuing a final judgment as to whether forced organ harvesting has been and was still going on in China, the Tribunal had also been charged to determine whether international criminal offenses have been committed by state or state-supported bodies or organizations or individuals in China. “To date,” he said, “none of the reports into China’s transplant practices despite hinting at the possibility of international offenses having been committed, have ever explored this allegation specifically.”

Whilst recognizing that a tribunal such as this was not responsible for the use to be made of its judgment, Sir Geoffrey regretted that allegations against the PROC over the years concerning forced organ harvesting from prisoners of conscience had born little fruit. He noted that under normal circumstances, a tribunal like theirs, “would not issue a partial or interim judgment but would wait until it had made all relevant factual and legal decisions and then issue its single final judgment.” But in this case, he said that “different considerations may apply where issuing a partial or interim judgment may serve the immediate public good.”

In closing he regretted that: “Without reference to criminality, it can be confidently asserted – not insignificant perhaps on ‘Human Rights Day’ that this year celebrates precisely 70 years to today since the Universal Declaration of Human Rights was adopted – that China’s practice of forced organ harvesting as evidenced before us is in breach of, as a minimum, the Declaration’s:

He added that Article 5 (torture) was also shown to have been breached by witnesses called to give evidence. All but one spoke of torture on arrest and detailed the subsequent medical testing they had undergone which was consistent with preparation for organ harvesting.

Concluding by reminding the Tribunal that, “Dangerous concepts of sovereignty that might now allow ‘other’ countries to do within their borders to their own citizens what they like to pay no regard to humanity being a single family protected by essential and codified rights. These concepts have to be confronted, and by confronting them with clear and certain decisions, such as ours concerning forced organ harvesting, real benefits may follow.”

He restated his hope that members of the public, doctors, academics, or government officials, would come forward and give their evidence which, he said would be considered “just as it would have been heard in the last three days.” “The ‘call for evidence’ on the China Tribunal website remains open so that members of the public may continue to contribute statements, or to identify further witnesses or documentary evidence, that the Tribunal may wish to consider.”