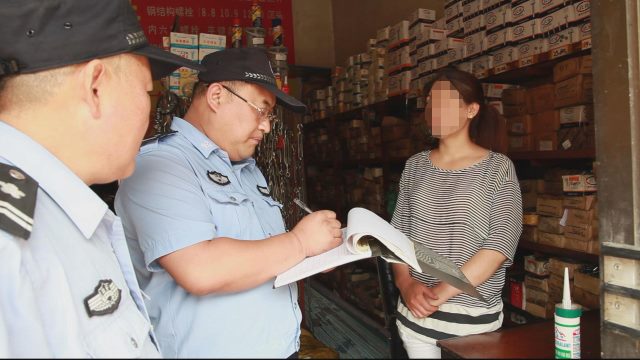 Since the beginning of this year, when China launched a nationwide campaign to “clean up gang crime and eliminate evil,” local governments across the country are persecuting certain religious groups using the same techniques as for combating organized crime. Other methods are also widely employed.

Recently, the government of Hebei’s Shijiazhuang city issued a questionnaire on the Chinese social network WeChat, the primary purpose of which was to encourage people to report criminals and also Christian house churches.

The authorities encourage reporting by rewarding active informants with cash. A government insider revealed that after the police verify received information, they conduct a stakeout or use other tracking methods to determine the time of religious meetings and launch arrest operations.

Government officials from Fujian Province’s Putian city distributed brochures regarding the campaign of “cleaning up gang crime and eliminating evil” to households, demanding cooperation. The Church of Almighty God, other underground house churches and Falun Gong, were mentioned as targets of the operation.

In mid-August, locals from the cities of Yuncheng and Linfen in Shanxi Province reported that government officials went door to door distributing flyers about the campaign as well as photographed residences of suspected believers and also recorded their personal information. Special advertisements have been created for the campaign and are being broadcast on TV. One of the 12 ads refers explicitly to cracking down on religious people.

One government official in Linfen city also revealed to our reporter that aside from arresting petitioners and dissidents, the primary target of the government’s operation “to clean up gang crime and eliminate evil” is people who believe in God; the reward for reporting a member of The Church of Almighty God is 5,000 RMB. He also said that the government’s vigorous propaganda is only the beginning – surveillance and tracking will follow soon, concluded by arrests and sentencing.

According to insiders, personnel from various government departments in Hebei Province have visited recently every village in groups of 5 to 10 people, going to each household to investigate and question suspects.

According to people who have been investigated, the government personnel claim to be checking on the households that “have minimum livelihood assistance” or are impoverished but the target of questioning are the people of faith, and the survey form requires people to fill out their “belief status.”

Reportedly, on May 17, 2018, 14 village secretaries from Quyang county in Hebei Province’s Baoding city had a meeting about poverty alleviation and environmental protection. Toward the end of the meeting, the superiors produced a document that demanded to investigate people of faith in every village, including believers in Taoism, Buddhism, Islam, and Christianity.

Christians in the provinces of Hebei, Jiangxi, Shanxi, and Fujian have reported that local police have come to their homes to investigate and question them about the names and personal information of their tenants. Officers mentioned that drug users, multi-level marketers, and people of faith are all targets of the investigation.