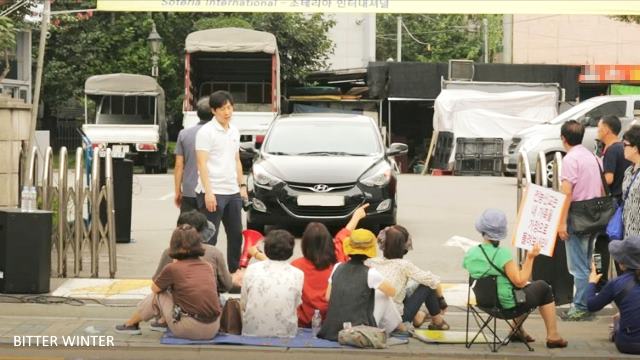 Three Korean Christian media, CBS, CTS, and Kukmin Ilbo, reported on the false demonstrations against The Church of Almighty God in Korea. In a frenzy to attack “cults” with whose theology they disagree, they took the side of the persecutors and the Chinese Communist Party against harmless refugees. We publish the letter our editor-in-chief wrote to them.

I am Managing Director of CESNUR, the Center for Studies on New Religions, the largest network of scholars studying new religious movements in the world. I am also editor-in-chief of a daily magazine about religious persecution and human rights in China called Bitter Winter. That I am an expert of new religious movements operating in China has been recognized by the Chinese authorities themselves, which have invited me to China repeatedly to lecture on Chinese new religious groups, including The Church of Almighty God (see for example https://kknews.cc/society/rrr2m8o.html).

I have followed your coverage of the demonstrations targeting refugees of The Church of Almighty God (CAG) in South Korea, and I am concerned that inaccurate information was supplied to your readers:

I have studied for more than thirty years Christian literature against “cults.” I understand that some Christians in Korea may strongly disagree with CAG theology. This is part of the normal dynamics of religious pluralism.

I am personally quite well-known as a Roman Catholic activist, as a quick look at Google or Wikipedia would easily confirm to you. Professor Zoccatelli teaches at Pontifical Salesian University, which is part of the Vatican academic system. Baylor University, which has published my study on the CAG and the family, is a Protestant Baptist university. Rosita Šorytė is herself a Roman Catholic. Bitter Winter is owned and operated by CESNUR, the Center for Studies on New Religions, headquartered in Turin, Italy, in whose board sit leading Catholic and Protestant scholars of international fame.

You can ask why Catholics and Protestants defend CAG refugees, as obviously our theology is different from CAG’s. The answer is simple. We do not defend a theology, we defend human beings against injustice, violence, persecution, and torture.

We are not alone. Although its theology is obviously different from CAG’s, yet the Evangelical Church in Germany (EKD) stands for the human rights of CAG refugees in Germany, who, when returned to China, “disappear” or are arrested. See https://www.evangelisch.de/inhalte/151945/04-09-2018/mitglieder-von-verbotener-chinesischer-sekte-von-abschiebung-bedroht?kamp=b-012

We found the EKD’s attitude truly Christian, as well as truly human. Obviously, we do not ask that you agree with CAG’s theology. What we ask is that you do not willingly cooperate with the CCP’s persecution and fake news campaigns, and distinguish between theological controversy and human rights issues.