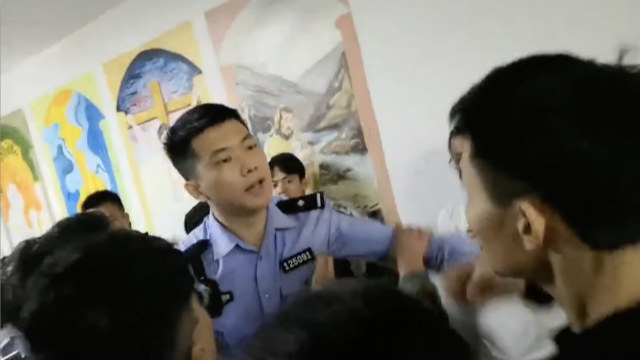 Police officers and government officials raided a gathering place of the Eternal Life Christian Church in Fujian’s Fuzhou and ordered to cease gatherings, in complete disregard to religious regulations and law enforcement procedures.

On the morning of October 21, seven local police officers and officials from the Ethnic and Religious Affairs Bureau stormed into the House of Eternal Blessing, a meeting place of the Eternal Life Christian Church. They claimed that the meeting place was not approved by the government and must be closed down.

The Eternal Life Christian Church set up its places of worship in Fuzhou city twelve years ago and has since been popular with students from universities throughout the city.

The officers started taking photos of the gathered believers, and the church’s preacher asked them to present themselves. One of them replied, “I’m wearing a police uniform and don’t need credentials.”

Police storm into the meeting place and order the believers to cease gathering:

An official from the Ethnic and Religious Affairs Bureau ordered the preacher to provide identification information of all the Christian students present at the site. When the preacher refused, she threatened to come back next week and order the police to arrest all church members.

“I can also ask the teachers of every university to identify which schools these students are from. I have this right because I represent the government.” She also threatened the students to use facial recognition system to identify them from the videos that the authorities had filmed earlier.

When one of the students commented on the unlawful behavior by the officers, he was threatened to be arrested “on suspicion of obstructing the execution of official duties.”

A police officer attempts to arrest one of the students, and government official demands identification information:

In mid-April, the Minhou County Bureau of Ethnic and Religious Affairs sent the first order to the House of Eternal Blessing to cease religious activities, or the venue would be shut down.

On October 9, another church’s meeting place – the House of Eternal Joy – in Fuzhou was also ordered to cease gatherings.

Commenting on the persecutions of the church, its leader said, “The State Council published a white paper on religious freedom this April. It claims that the law protects all normal religious activities that citizens conduct in their own homes in accordance with religious practices, and no organization or individual may interfere. It turns out that the CCP’s purported freedom of belief is just a bunch of lies and empty catchphrases.”