Amid the spread of the coronavirus epidemic, China’s communist government is censoring and suppressing any information that might damage its reputation.

On February 11, the Discipline Inspection Committee of Nanning, the capital of the southern China’s Guangxi Zhuang Autonomous Region, published a notice on its website, informing that the director of the city’s Health Commission, Lan Zhi, is fired for “sending misinformation on the epidemic prevention and control,” that “had a negative social impact.” It also states that Lan Zhi has been removed from the CCP and all government posts as a punishment, even though the notice doesn’t mention what exactly he had said in the messages.

The notice raised concerns among Chinese netizens, who asked the authorities to publicize the content of the “disinformation” for people to see how demanding it was. Some commented that the government wants to keep any information it thinks is harmful to its reputation from the public because “if the information sent by the health commission is untrue, what information is true then?” Other netizens noted that Lan Zhi could be another Li Wenliang – the whistleblower doctor from the Wuhan Central Hospital who warned his colleagues about the dangers of the virus and died from it on February 7.

After Li Wenliang shared his concerns, citizens started expressing their dissatisfaction with the government, which is trying to cover up the real situation and punishes “rumor starters.” The government’s cover-ups not only accelerated the spread of the epidemic but also increased panic among the population. In reality, the vague definition of “rumor” leaves a wide back door for the CCP to suppress any expression of free speech.

According to the government-published information on the punishment of “rumor-starters,” collected by Twitter user “中国文字狱事件盘点(@SpeechFreedomCN),” the CCP’s main criterion is that all information which is not published by the state is a rumor, regardless if it is true or not.

On January 23, Ms. Yang from Chengdu, the capital of the southwestern province of Sichuan, posted an audio message in a WeChat group about the news she had received from an insider: “Chengdu city will not be locked down tomorrow, but the city’s Center for Disease Control and Prevention will publish an important message.” She also called on the group members to stay home. Subsequently, a public security institution investigated and punished Ms. Yang as a “rumor starter.” The police notice regarding her case states that she was given reduced punishment because she was cooperating with the authorities by deleting her post. The next day after she posted the message, the Sichuan provincial government initiated the first-level response to major public health emergencies, ordering to close down temporarily many public spaces. The “rumor” has come true. 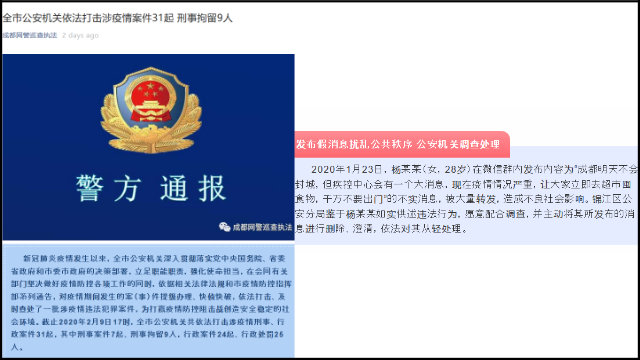 On January 26, Mr. Xie from Guangshan county in the central province of Henan posted screenshots of chats in a WeChat group. Among them was: “The media are big fat liars. Thousands are thought to have died from the Novel Coronavirus (NCOV), but hospitals intentionally refused to diagnose them as confirmed cases, so these deaths were not considered as caused by the NCOV, resulting in the underreported number of deaths.” Mr. Xie was detained for five days and fined 500 RMB (about $ 70) for “spreading rumor on the epidemic situation and disturbing public order.”

Amid the government’s vigorous crackdowns, the citizens have almost lost the freedom to share any information that is not issued by the government. Many were held accountable even though they stated that the information they had shared was not confirmed. On January 22, Mr. Huang from Yongfeng county in the southeastern province of Jiangxi posted remarks in his online group, “It’s said that Yongfeng County Hospital has identified two cases of NCOV, and both have been isolated, after returning home from Wuhan. All county’s drugstores are out of gauze masks.” Even though Mr. Huang added that he was not responsible for the authenticity of this information, he was punished by the police.

Even those who questioned the authenticity of the officially-published information are punished as “rumor starters.” Ms. Wei from the autonomous county of Longlin, under the jurisdiction of Baise city in Guanxi, questioned on Weibo the authenticity of the official data, saying, “Is there only one case within the jurisdiction of Baise city? My mother told me there are already two cases in Longlin.” She was admonished as a “rumor starter.”

Ms. Yang from Baise was also punished for asking on Weibo, “Is it true that there is only one case in Baise? There are people isolated in Baise’s Longlin county and Tianyang district.” She wanted the government to publish accurate statistics so that local people could know the seriousness of the epidemic.

According to information published by the government, more and more citizens are being punished for “spreading rumors” on the coronavirus epidemic. By the end of January, at least 37 people had been punished in Daqing city in the northeastern province of Heilongjiang, and at least 22 in Shijiazhuang city in the northern province of Hebei. On February 9, there were 31 known cases in Sichuan’s Chengdu city, nine of whom have been detained.