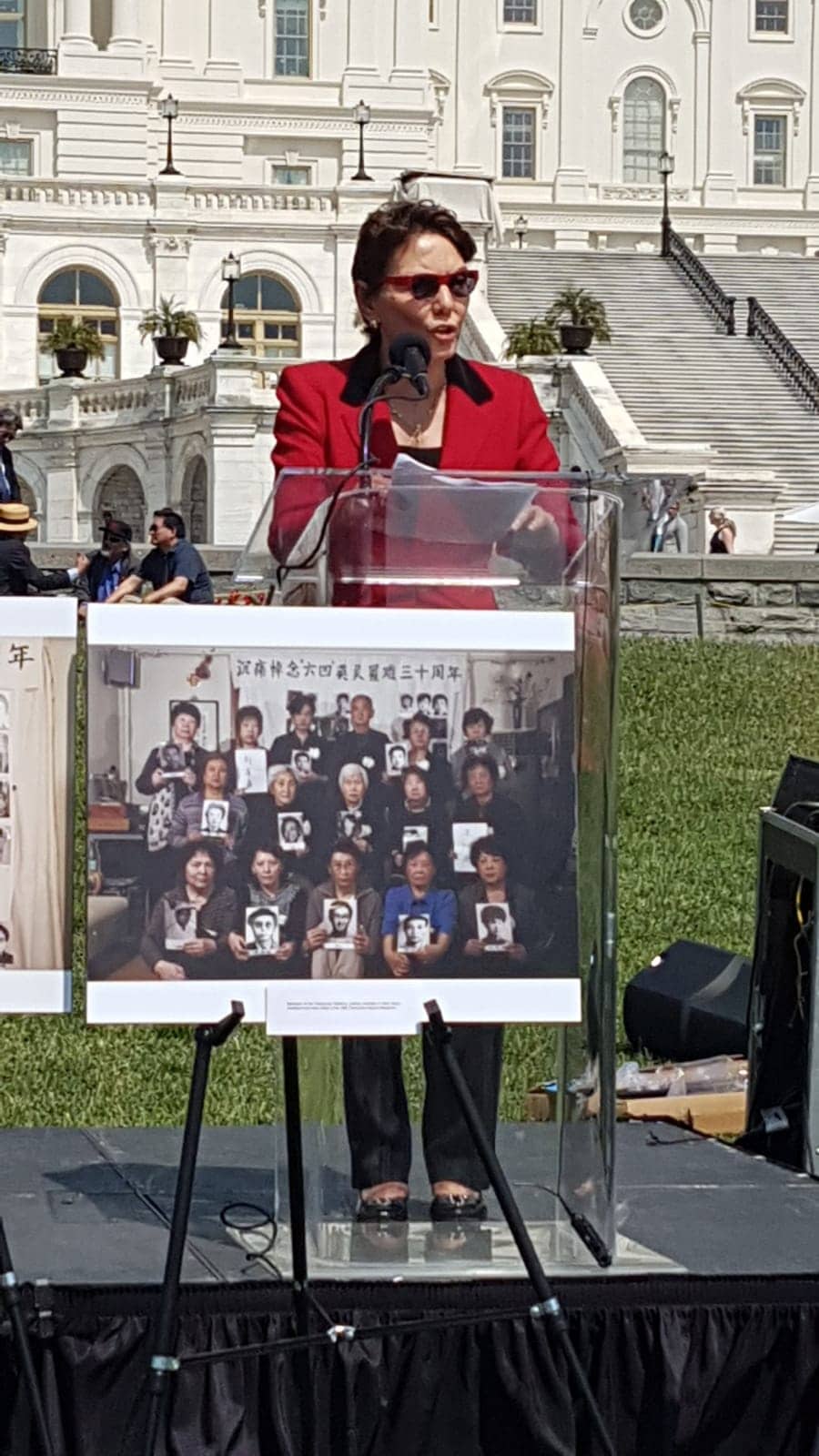 This is the full text of the address given by the Author, President of Women’s Rights Without Frontiers, at the Tiananmen Square Massacre Rally of Remembrance held on June 4, at the West Lawn of the United States Capitol in Washington. D.C. The event was organized by the Victims of Communism Memorial Foundation. Bitter Winter was present as one of its many co-hosts and the event was attended by several speakers of different religious persuasions and political inclinations representing over 20 human rights organizations . A few US politicians also addressed the crowd, and Ms. Nancy Pelosi (D-CA), the Speaker of the House, came unscheduled to the event.

Thirty years ago today, the Chinese Communist Party massacred innocent students as they took a courageous stand for democracy of their country. They crushed any hope of political freedom in their land and left the rest of the world appalled, aghast at their brutality against the young and innocent.

Today, 30 years later, we see that human rights in China have not improved, but have deteriorated.

In 1994, when President Clinton decided to de-link Most Favored Nation status from human rights, the idea was that if we were to increase our economic and trade relationship with China, they would naturally embrace our values and improve on human rights.  That policy has proven to be an epic fail.

It would be impossible to gather so many people from so many parts of the country onto the Square, because China has become a surveillance state.  They use technology as tools of repression:  Millions of surveillance cameras for facial recognition and millions more of internet thought police to spy on their citizens. They issue social credit scores, and if your score is low enough, you cannot travel.  They force people to study “Xi Jinping Thought,” which indoctrination permeates schools, billboards, and smart phones.

Reading the Congressional-Executive Commission on China report on human rights in China is like reading an indictment. As China’s economy has grown, so has its notorious disregard of human rights:

It has been estimated that 65 million people died as a result of Mao Zedong’s creation of a “socialist” China.  This number makes him the greatest mass murderer of the 20thcentury.   Yet even that number is eclipsed by the 400 million lives prevented by coercive population control.  I would add that 400 million to the 65 million for a total of 465 million lives snuffed out by the CCP.

This is the hallmark of Communist regimes – the peacetime killing of their own citizens.

The two-child policy has not stopped this slaughter. The new rule is that every couple is allowed to have two children.  Therefore, it is still illegal for single women to have babies in China, and third children are still illegal.

Girls are still selectively aborted.  And senior suicide has skyrocketed 500 percent in the past 20 years, because the One Child Policy has destroyed the family structure in China.  Elderly widows are abandoned, destitute, and are at risk of suicide.

Gender imbalance exacerbated by the One Child Policy is driving human trafficking and sexual slavery.  In its June 2018 Trafficking in Persons Report, the State Department has listed China as a “Tier 3” nation, one of the worst offenders in the world.  Does the CCP refuse to crack down on the trafficking of women because doing so could cause an insurrection of the 37 million men who will never find wives?

What should we do?

We should utilize the Global Magnitsky Act, which authorizes the US government to sanction those human rights offenders, freeze their assets, and ban them from entering the U.S.   I propose this not only for family planning officials, but for all gross human rights offenders, who should be held publicly accountable.  Let all that has been hidden in darkness be brought to light.

With 1.4 billion people, China holds almost one fifth of the population of the world. One in five people is suffering under the boot of this brutal, totalitarian regime.  The world will not be free until the people of China are free.