The three decades since the Tiananmen tragedy have passed in the blink of an eye, but the scenes of the CCP’s violent acts of suppression feel just as vivid as yesterday. 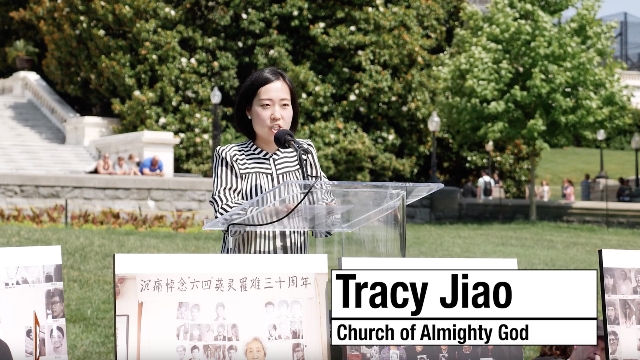 This is the full text of the address given by the Author, a member of The Church of Almighty God, at the Tiananmen Square Massacre Rally of Remembrance held on June 4, at the West Lawn of the United States Capitol in Washington. D.C. The event was organized by the Victims of Communism Memorial Foundation. Bitter Winter was present as one of its many co-hosts and the event was attended by several speakers of different religious persuasions and political inclinations representing over 20 human rights organizations . A few US politicians also addressed the crowd, and Ms. Nancy Pelosi (D-CA), the Speaker of the House, came unscheduled to the event.

Hello everyone, I am a Christian of The Church of Almighty God. First, I’d like to thank the Victims of Communism Memorial Foundation for inviting us to co-host this event.

The three decades since the Tiananmen tragedy have passed in the blink of an eye, but the scenes of the CCP’s violent acts of suppression feel just as vivid as yesterday. The Western world has continued to hope that the CCP will express true remorse and acknowledge their error, and make a turn toward democracy, or at least admit to the victims’ families that they were wrong and provide compensation. However, that has all come to nothing. Not only has the CCP not expressed a shred of remorse, but has become even harsher and more unscrupulous, wantonly repressing and persecuting democrats and dissidents. In addition, their brutal suppression and persecution of Christians has devolved to a point of madness; they are stifling and attempting to eliminate all religions.

These things can be found everywhere in today’s Chinese mainland. The CCP has interned over a million Xinjiang Muslims in concentration camps, carrying out cultural and ethnic genocide against Uyghur people. They demolish Buddhist and Daoist temples, as well as churches and crosses, confiscate and burn Bibles, and even tamper with Scripture, driving out foreign missionaries and arresting Christians. The CCP has carried out a number of special operations targeting The Church of Almighty God and has performed more than a million arrests of Christians.

The CCP’s trampling of human rights has reached a peak. We call on human rights organizations and governments across the world to turn your eyes to China’s oppression of its people, to the families of the Tiananmen victims, to the ethnic minorities in Xinjiang, to China’s Christians and Catholics. We will also pray to God and ask for more countries to impose sanctions against the CCP; we hope that God will one day soon obliterate this evil party that swallows its people whole and slaughters them.