The lies and deceit at the heart of communism continue, as properties are destroyed and families disrupted to hide poverty from official statistics. 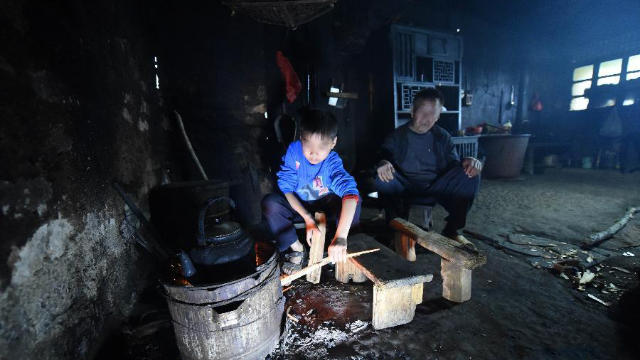 According to media reports from mainland China, the provincial Party secretaries and governors of 22 provincial-level administrative divisions in midwestern China have signed a poverty alleviation “responsibility statement” with the central authorities. Officials promise to achieve the poverty reduction goal or face a severe penalty for failing to do so. This is the only time since the 18th National Congress in 2012 that top provincial Party and government leaders have written pledges to the central authorities.

With their promises, poverty alleviation has become a top priority that could threaten the job security of officials. Bitter Winter previously reported that some local governments had forced seniors to live together with their children as part of their poverty reduction strategy. Under the perverse logic of the Chinese Communist Party (CCP), poor people who move into other people’s homes have the benefit of multiple incomes, and thus are deemed to have been lifted out of poverty. The houses of some elderly people have been deemed as dilapidated buildings and demolished.

As a result, the number of substandard housing units has miraculously decreased. Thus, the goals of the local officials have been accomplished, but the elderly people continue to suffer poverty alleviation tragedies and farces throughout China.

Just say whatever the Party tells you to say

To prepare for inspections from the higher authorities, some impoverished villagers in northern Shanxi Province’s Yuncheng region are receiving special “training.”

According to one government insider, if the poverty alleviation task is not completed this year, the local officials in charge will be dismissed. To protect their posts, the officials arranged for personnel to conduct “home-stays.” Every few days, these officials go to impoverished households to indoctrinate family members with poverty-alleviation slogans. Their goal is that families speak with a unified voice when central authorities arrive for inspections. Their answers must include the “two non-worries” (not worried about having enough food to eat and not worried about having clothes to wear) and the “three guarantees” (guaranteed medicine, guaranteed housing, and guaranteed education). In order to embody the “two non-worries,” impoverished households must have good clothes hanging in the closet, and there must be eggs and meat in the refrigerator.

“Whatever the government tells us to say, that’s what we have to say,” one villager who was forcibly “lifted out of poverty” said with a sense of helplessness. “If even one household gives a wrong answer, then our county cannot be claimed to have alleviated poverty this year. Consequently, the government won’t let us have a good life.”

Another villager, Mr. Zhang of Yuanqu county, didn’t know whether to laugh or cry when local officials came to prepare him for inspections by the central authorities. Mr. Zhang was told that he must lie and say that he was impoverished in 2014, and had been lifted out of poverty in 2015. But he told Bitter Winter that he didn’t know that he was impoverished before local official told him so, and he has never received any benefits to lift him out of poverty.

Seventy-two-year-old Wang Zhangming, his wife Li Mei, and their two sons had lived together in Shangshui county in Zhoukou city, central Henan Province. After their children moved out, the old married couple built a small house on the east side of their village, where their days were leisurely and comfortable.

In August 2018, they used bricks and tiles to build two extra rooms next to the small house. But before construction had been completed, the government demanded that they move out and go to live with their sons.

Local officials told Mr. Wang bluntly, “This is the policy. No one can do anything about it. After this campaign has finished, you can move back again. We’ll take a photo, and that will be the end of it.” Clearly, “poverty alleviation” was merely a slogan and had nothing to do with actually helping poor people.

A few days later, a signboard reading “uninhabited” was hung in the most conspicuous place on Wang’s house. This implied that they were legitimately lifted from poverty.

The “uninhabited” sign serves other purposes as well. Improving dilapidated buildings is also part of the “poverty alleviation” policy. Of course, since the house is already “uninhabited,” it does not need to be repaired or improved.

In order to meet their goals of reducing the number of substandard housing units, government personnel violated their previous commitment to Mr. Wang. They informed him that if the couple dares to move back into the little house, it will be demolished. Reoccupying the house would “bring shame upon the government.”

Mr. Wang knew that the government wasn’t making idle threats. In every village under the jurisdiction of Shangshui county’s Weiji township, old houses had been torn down. In Lizhuang village alone, 25 homes suffered that fate. The couple had no choice but to live with their second son.

In October 2018, while their son was demolishing his old house to build a new one, Mr. Wang and his wife had nowhere to live. They decided to risk going back to their former little house. Shortly afterward, they were discovered by the village Party secretary, who once again threatened to demolish the house unless the elderly couple moved out.

The couple were scared and hurriedly moved to their other son’s home. But that son’s family did not get along well with Mr. Wang and his wife, so there was still no place for them to live.

Exhausted from the moving and worrying and with nowhere to go, the elderly couple sat outside by the river. Li Mei lamented, “We can’t live in the house that we built with our own hands. What will I do? What kind of world is this? They’re forcing us down a dead-end road.”

Mr. Wang tried to persuade his wife to accept the situation and move on. His wife said that she wanted to find a place to rest for a while, so she returned to the small house by herself.

By the time Mr. Wang went to the house to look for her, he had discovered that his wife had ingested pesticide and died alone in the house.

Those with a more cynical outlook say that Xi Jinping may succeed in his task of totally eliminating poverty by 2020… in a sense at least. Targets can always be met, as long as you define them correctly. James Wen Guanzhong, a retired economics professor at Trinity College in the United States, said, “As a government task, the possibility exists that this goal could be reached through various artificial, short-term, special means. But that isn’t the same as saying that this kind of poverty alleviation is sustainable. After everything is back to normal, poverty will return again.”

(All the names in the article are pseudonyms.)