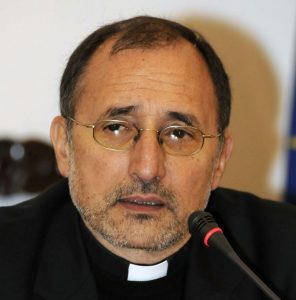 Father Bernardo Cervellera is the editor of AsiaNews, the official press agency of the Roman Catholic Pontifical Institute for Foreign Missions (PIME). A former professor of History of Western Civilization at Peking University (Beida), he is widely regarded as the leading Catholic expert on China.

A couple of months ago, some media announced that an agreement between China and the Holy See was imminent. After several weeks, no further news have been published and the optimism seems to have somewhat subsided. What, exactly, is happening?

The meaning of what is happening is that China is reluctant to sign an agreement with the Holy See on the selection and appointment of Catholic Bishops. I do not consider this agreement as positive for the Church, because the regime would select the candidates. However, some in China regard its as dangerous for the government too. More precisely, within the regime there is a group favorable to the agreement and another group that is firmly against it. The latter includes the United Front (including the Chinese Communist Party [CCP], eight minor parties controlled by CCP and the All-China Federation of Industry and Commerce) and the Chinese Patriotic Catholic Association (i.e. the Catholic organization controlled by the CCP). The optimism transmitted to the media was part of a Vatican campaign aimed at persuading the Chinese side to sign the agreement.

The same media gave the impression that the persecution of the underground Catholic Church was, if not exactly a thing of the past, no longer as severe as it used to be. However, AsiaNews recently reported disturbing news of a crackdown on Catholic underground churches in Henan. Is this a phenomenon peculiar to Henan only? Or was the optimism not justified?

The campaign is not confined to Henan and is not even confined to the underground Church. We published in AsiaNews information about destructions of churches and increased controls in Xinjiang and Shanxi. Note that some of these measures were directed against churches of the Patriotic Association. There are persecutions in Inner Mongolia too. Our sources in China tell us that the government is testing the reaction of the Catholics in some provinces, with the idea of applying later the same measures in the whole country. There is no reason for optimism. From 2014–2015 we have seen, one after the other, the campaigns against the crosses in Zhejiang and the arrests and suspicious deaths of Catholic leaders in Shanxi. Mgr. Thaddeus Ma Daqin, the bishop of Shanghai for the underground church recognized by the Holy See, remains under house arrest. The new regulations show that the regime regards the religions as dangerous, and one reason is that they are growing rather than declining. The regime is very much afraid that China can follow the path of the Soviet Union.

A new law on religion came into force in China on February 1, 2018. It was also announced that SARA (the State Administration of Religious Affairs)  was being disbanded and the religious activities would pass under the direct control of the CCP. What are the main consequences of all this for Chinese Catholics?

In fact, the new laws threaten to suffocate the Catholic Church and indeed all religions. The prohibition for the minors of 18 to enter the churches is now unanimously enforced, and even prayer meetings in private homes are regarded as “illegal religious gatherings,” with the risk of being arrested, or compelled to pay a fine, or having the building seized, according to the new rules. SARA was placed under the control of the United Front, but the persons remain the same. And as far as the Catholics are concerned, the United Front continues with the rhetoric that the Chinese Catholic Church should be independent from Rome and completely controlled by the Patriotic Association, including in the financial aspects—which are of great interest to the same Patriotic Association.

How do you see the future of Catholicism in China under a possible presidency for life of Xi Jinping?

At the beginning of his presidency, there were hopes that Xi Jinping might be a reformer and even a friend of religions, as his father had been. But now there are many doubts on this. Ultimately, the crucial factor for the future of the Catholic Church in China will not be Xi. It will be the strength of the local Catholics and the help they will receive from us. We need to support them in the formation of priests, nuns, and lay leaders, and to increase their relationships with the international and universal Catholic Church, in order to counteract the somewhat paranoid “independentism” of the government’s religious policy.