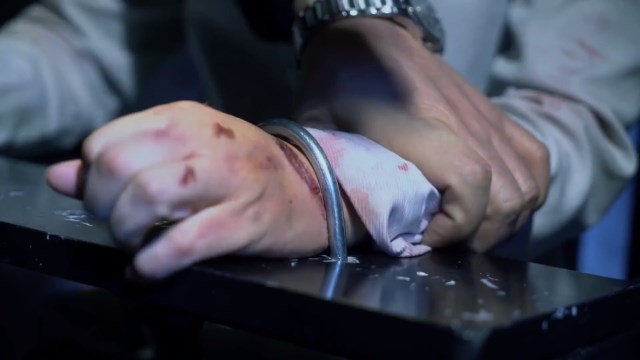 Since the beginning of April, the Jiangsu provincial police launched a unified operation aimed at The Church of Almighty God, resulting in the arrest of at least 88 people. Li Qin (pseudonym) is one of the members of this Chinese Christian new religious movement who was arrested during the operation. She was secretly tortured and interrogated for three days and nights and later released on bail to await trial, but she is still closely monitored.

After the arrest of Li Qin in early June, the local police broke into her home and confiscated a large number of religious books. At the police station, Li was handcuffed and repeatedly interrogated about the church’s finances by the director of the Public Security Bureau who threatened to implicate her children and grandchildren if she did not provide information.

According to informed sources, the police interrogated her until two o’clock in the morning. Li Qin still refused to provide any information about the church. The director threatened to torture her if she refused to cooperate.

The following day, the police took Li Qin to a small closed room in a hotel, where she was secretly tortured and interrogated. Four police officers, including the director of the city Public Security Bureau and officers from the National Security Brigade, forcibly tied her to an iron chair and took turns interrogating her for three days and nights in a row, not allowing Li Qin any chance to sleep. As soon as they saw her nodding off, they immediately shouted her name. Sleep deprivation made Li physically and mentally exhausted; she felt dizzy and lightheaded. Inside sources reveal that, in recent years, the police often use the so-called “soft violence,” when during interrogations they do not use any physical force that would leave marks and scars, instead, they aim at destroying person’s spirit by using psychological pressure.

Li Qin’s family used their connections and spent tens of thousands of yuan to secure her release; eventually, Li was released on bail. She was prohibited from leaving the province and was ordered to be on call at any time. If the police discovered that she continued to believe in Almighty God, she would receive a prison sentence. She continues to be closely monitored by the police and faces the possibility of being detained or imprisoned at any time.