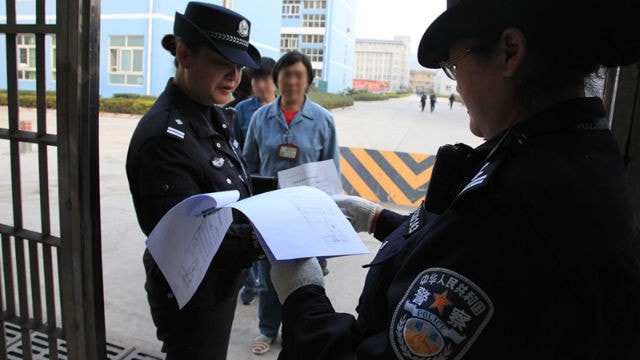 In China, where freedom is not free, decorating one’s own home or having a “sensitive” social media username is a license to be arrested or even sent to jail.

In authorities’ harsh crackdown on religions and beliefs, the use of sensitive words in China can also turn into a reason for being arrested and convicted. That’s the ugly lesson Mr. Huang, a villager in Xiayi County in Shangqiu city in central China’s Henan Province, learned the hard way on November 26, 2018, after he used an ink brush to write the Chinese character “忍” (rěn, meaning “forbearance” or “to endure”) on the street-facing courtyard wall of his own home.

The following day, officials from the local poverty alleviation office discovered the character “忍” on the wall. Perhaps interpreting it as a “danger signal,” they insisted on calling the police. Even though Mr. Huang’s wife said she would immediately remove the character, the poverty alleviation officials kept preventing her from doing so to preserve “criminal evidence.”

After three police officers arrived, they immediately took photos of the character on the wall, and sternly questioned Mr. Huang’s wife: “Why did you write the character ‘忍’? Are you expressing dissatisfaction with the government?”

Mr. Huang’s wife hastened to explain that her husband wrote the character to encourage her to endure the pain and suffering caused by her illness. The police rebuked her, saying, “Writing the character “忍”  means you believe in a xie jiao!”

The police then searched the home, rummaging through each and every room, even prying open a sewing machine to check it.

Unable to find any suspicious items, the police wouldn’t give up. They drove to Mr. Huang’s workplace to question him about his intention in writing the “forbearance” character. The police then took Mr. Huang into custody to interrogate him further.

After one of Mr. Huang’s relatives, who is a government official, pleaded on Mr. Huang’s behalf and ensured that he did not have any religious beliefs, the police reluctantly agreed to release him.

Jiang Linghua, a resident of Yancheng City in Jiangsu Province, was not so lucky.

For two years since 1997, Jiang Linghua practiced Falun Gong with some friends and relatives until the Chinese government launched a comprehensive crackdown on this new religious movement in 1999. She stopped practicing right afterward. However, she never expected that although 16 years had passed, she would be arrested and sentenced to prison because of her online user name.

On October 13, 2015, Jiang Linghua was at her store when more than 20 plainclothes police officers suddenly surrounded her. Without presenting a search warrant, the police wantonly searched her store. After finding a hand-copied book with Falun Gong-related contents, the police forcibly took her to the local police station.

Jiang explained that she didn’t have anything else in mind when choosing her QQ username and that the articles were just forwarded to her by someone else. She said that she hadn’t even finished reading them. The police then threatened the future of her close relatives to force Jiang to sign and admit her guilt. The police also deceived her by saying that as long as she follows their instructions and admits that she believes in Falun Gong, she would be released soon. Jiang took them for their word and signed her name.

Only after the police obtained this “criminal evidence” did they indict her for “using a xie jiao organization to undermine law enforcement.” She was sentenced to one year and six months in prison.

Jiang recalled that while in custody, she was forced to watch indoctrination videos every day and was often bullied. Living conditions in the prison were terrible, causing her to experience severe hair loss. For a while, she even thought about committing suicide.

“I suffered the injustice of being jailed for one and a half years for no reason at all,” she said, adding that since her 2017 release, government personnel still frequently call her to ask whether she practices Falun Gong.

“How come you still won’t leave me alone,” she asked once. To which the government official replied, “I know you’ve never done anything bad. I’m just following the order from above.”