Nurtured through generations, sacred places for families to pay respect to their ancestors are taken over by the state for indoctrination, shut down or demolished.

An integral part of China’s folk religions, ancestral halls (known in Chinese as citang or zongci) and temples are built to pay tribute and pray to sages, to honor the family lineage. They record the history, culture, and traditions of a family clan and folk customs, which are passed on through generations. These halls are considered sacred and inviolable. But not for the communist regime.

The new era of destroying the past

“We must continuously pass on our ‘red genes,’ cultivate strong patriotic feelings, and draw spiritual strength from this,” a speaker at a training course on agricultural machinery and agronomy was explaining to the participants gathered at the Huang family ancestral hall in Gutang village in the southeastern province of Jiangxi. Similar classes are now held at this ancestral hall weekly.

The Huang family ancestral hall has been taken over by the state and converted into the “Civilization Practice Centers for a New Era,” as part of a program implemented by the Chongren county government. One after another, ancestral halls in the locality have been repurposed for lecture halls or other “red activities.”

An activity to “revisit the Party oath” was held at the Huang family ancestral hall:


Building “Civilization Practice Centers for a New Era” is a nationwide project launched by the CCP at the end of 2018, under which, many churches have already been repurposed for government use. According to official government reports, the initiative is considered as an important tool in “promoting ‘Xi Jinping Thought on Socialism with Chinese Characteristics for a New Era’ to take root in the hearts of the people.” The centers should be used to “make sure that grassroots-level governments carry out and strengthen the Party’s ideological propaganda work effectively.”

During the Cultural Revolution, many ancestral halls were damaged or obliterated. Those that survived were converted into schools or warehouses. It wasn’t until the 1980s that ancestral halls gradually recovered. But the CCP is making sure now that they are eradicated for good.

On July 1, which marks the birthday of the Chinese Communist Party, the Huang family ancestral hall was used for a performance, themed “Obey and follow the Party, be grateful to the Party, roll up your sleeves and work hard: Red literature and arts light cavalry goes to the grassroots.” Despite the attempts to promote the performance, it didn’t appeal to village residents: only a few stayed until the end of the show.

A poem “Always Follow the Party,” recited during a performance at an ancestral hall:

The late bishop of the Diocese of Yujiang, Thomas Zeng, used to live in Chongren county’s Xiazhang village; the majority of its residents are Catholics. On May 23, the county’s Culture and Tourism Bureau organized a performance on the topic of “religious transformation” at the Zeng family ancestral hall, which has also been converted into a “Civilization Practice Center.” Before the show, the county’s Party secretary gave a speech, ordering villagers to “recognize the law” and condemned Catholics who refuse to join the Chinese Patriotic Catholic Association, referring to them as xie jiao – religious groups that are banned and persecuted in China. “This is Xi Jinping’s world now. You must follow the Party,” the secretary proclaimed.

According to state-run media reports, the campaign to “convert ancestral halls into lecture halls” is also underway in other parts of Jiangxi Province, such as Shanggao county under the jurisdiction of Yichun city, and Guangchang county, administered by Fuzhou city.

In July, plaques “Obey the Party, be grateful to the Party, follow the Party” and “Cultural Activity Center” were posted on the exterior wall of an ancestral hall in Xiejia village in Fuzhou city’s Linchuan district. Village residents reported that officials threatened to demolish the building if the plaques were not hung up. Similar slogans and signs were displayed on the walls of at least eight other ancestral halls in Linchuan district.

Shut down or demolished

Meanwhile, some ancestral halls that have not been repurposed were closed down permanently or destroyed. On March 17, 2018, the Changfeng Ancestral Hall in Xianyou county in the southeastern province of Fujian, which cost over seven million RMB (about $ 980,000) to build, was violently demolished on the grounds that it was “too close to the County Administrative Center and too noisy.”

Residents of a village administered by Diqiao town, under the jurisdiction of Huangshi city in the central province of Hubei, reported that not only were they prohibited from rebuilding a damaged ancestral hall, but the government vandalized the building even more. Local officials said that they would not approve any permits for building ancestral halls, because “the state doesn’t allow to build ancestral halls or temples.” 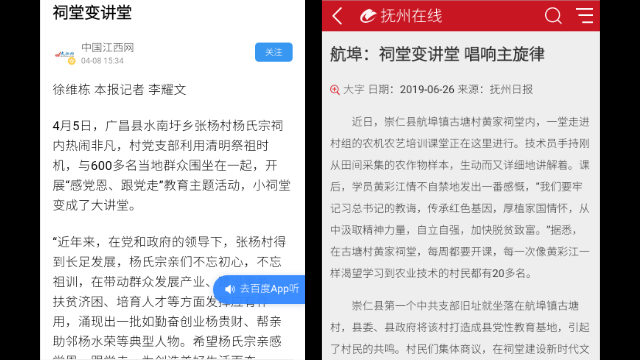 An edict issued by a locality in Fujian at the end of last year confirms the officials’ words. The Guiding Opinions of the Fujian Provincial Department of Ethnic and Religious Affairs on Strengthening Management Work for Folk Belief Activity Venues prohibits the building of new venues dedicated to folk religions. The functioning venues that need to be relocated, expanded or rebuilt must go through a strict, multilayered process to obtain approvals from the Religious Affairs Bureau, the Land and Resources Bureau, the Construction Bureau, the Planning Bureau, and other government departments.

The document also states that the management of folk religion activity venues must be incorporated into the grassroots-level grid management. The township government (or sub-district office) and villagers’ or residents’ committees must assign personnel to be in charge of this work and carry out strict supervision. All venues must agree to have their finances managed by the government, and they are not allowed to accept financial aid from abroad. Unregistered folk religion venues should be demolished, repurposed, or merged.