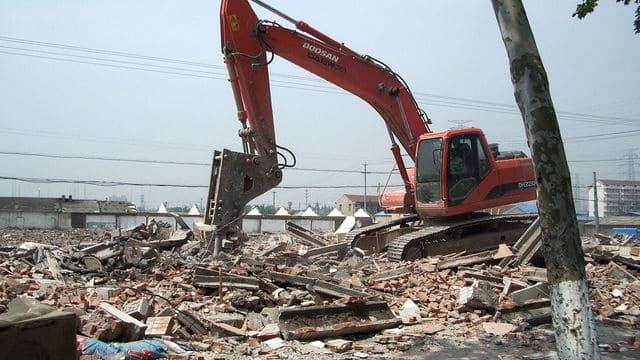 A Temple in Fujian Province was razed to the ground because of the local authorities’ plans to use its land for a real estate development with private companies.

Located in the Xianyou county of Putian, the Xilin Temple had a history spanning over 400 years. Popular with the locals as a cultural and religious venue, the temple was reconstructed in 1989 at the cost of over one million RMB (almost 146,000 USD). It was registered with the Religious Affairs Bureau in 2008.

According to the residents of the village where Xilin Temple was located, in early August, the government of Putian’s Li’nan town announced its plans to demolish the temple to make way for profitable real estate development.

Because the authorities failed to provide proper documentation and had not discussed the demolition with the temple’s administration and the public, people in the village resolutely opposed the plans. Local officials replied that “the government was more important than Bodhisattva, so, the temple must be demolished if authorities want to use the land.” (A person who aspires to enlightenment and carries out charitable practices is referred to as Bodhisattva).

On August 10, the authorities mobilized more than 300 personnel and put up police tape around the temple. About 20 seniors were inside the temple protesting against the demolition, but they were forcibly dragged outside, police officers threatening the onlookers that anyone who tried to intervene would be arrested. Soon after, the temple’s courtyard walls, its fitness facilities, and a 200-square-meter construction used for opera performances were all razed to the ground.

Four days later, over 100 villagers went to the county’s Letters and Visits Office to protest the unlawful demolition of the temple’s facilities, but their case was not accepted and was instead transferred to the Li’nan town government.

On September 7, the local town party secretary came to the Xilin Temple, accompanied by more than 300 personnel to finish the demolition. Using an excavator and forklift, government-hired workers destroyed the temple.