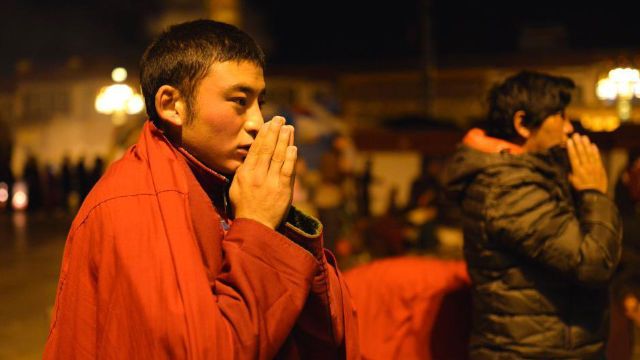 Poor Tibetans lose their land, then lose their subsistence allowances unless they stop the practice of Buddhism. Grid Administrators monitor.

In May of 2018, authorities ordered impoverished Tibetans who live on minimum subsistence allowances from the state to stop worshiping Buddha or face the prospect of their subsistence allowances being canceled. This new order represents an escalation of the historic policy of the Chinese Communist Party (CCP) to persecute Tibetans and to force them to abandon their religious beliefs.

Bitter Winter interviewed a number of Tibetans from Lhasa city in the Tibet Autonomous Region recently. Numerous sources confirm that the government appropriated the land of many local Tibetans several years ago, leaving many without income or food for survival. As a result, many Tibetans who were unable to earn a living had to depend on the minimum living allowances provided by the government. This latest order to deny subsistence benefits threatens not only the freedom of religion, but the very survival of many poor Buddhists.

After the ban on worship for recipients of the subsistence allowances was announced, Dolma, a woman in her 50s, was scared. She didn’t dare to perform Kora or worship Buddha, as the authorities are monitoring her every move. (Kora is a religious activity, as well as the means of how the Tibetans show religious devotion. Kora is both a type of pilgrimage and a form of meditative practice in the Tibetan Buddhist and Bon traditions.)

According to sources, the local government appointed a grid administrator to keep the Tibetans under surveillance from 9 a.m. to 9 p.m.

Dolkar is an elderly widower in his 70s and a devout Buddhist. With the authorities employing such methods to coerce him into not worshipping Buddha, the old man has suffered greatly. Every day, he says, he helplessly sits in front of his front gate, idly passing the time he has left.

“It’s good to worship the Buddha. [Buddhists] don’t steal or rob others – it’s all about teaching the good. Why is the government so determined to restrict and suppress our religious beliefs?” one Tibetan asked.

Some analysts believe there is a hidden plot behind the appropriation of land and distribution of subsistence allowances. The CCP wants to take control of the Tibetan people by controlling their livelihoods. When they control Tibetans fully, they will eliminate their religious beliefs. Constrained by their survival needs, the Tibetans will have no choice but to capitulate to the government.

The attempt to deny welfare to religious Tibetans is only the latest in a long line of abuses and persecutions imposed on this suffering people. Various regulations have been issued to achieve comprehensive control over Tibetan Buddhist monks, nuns, and temples, and the government has even tried to control the reincarnation system of Tibetan Buddhism. Civil servants have also been targeted. On January 9, a Voice of Tibet report quoting the Tibetans in China stated that the CCP authorities had issued a ban prohibiting officials in Lhasa city from participating in Buddhist religious activities, threatening that those who disobey will lose their welfare benefits for life.

(All names in this text are pseudonyms.)