After the Washington Ministerial, the CCP rallied “Uyghur and Kazakh scholars” to sign a letter criticizing the U.S. This looks like just another hoax. 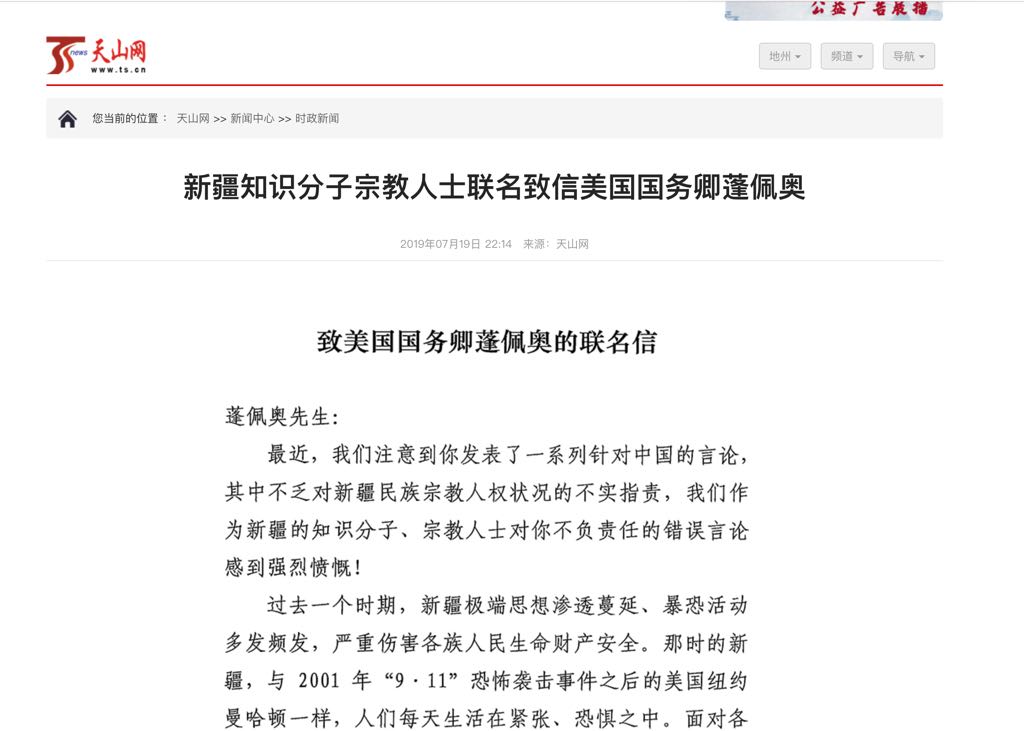 After the U.S. Secretary of State, Mike Pompeo, at last week’s Ministerial to Advance Religious Freedom in Washington DC, criticized the Chinese treatment of Uyghurs, calling it the “stain of the century,” the Tianshan news website, the official mouthpiece of the Xinjiang CCP government, published a letter signed by “Uyghur and Kazakh scholars”  and addressed to Mike Pompeo, intended as a rebuttal to his remarks.

I have some questions about the credibility of the letter. First, how can those “scholars” and “intellectuals” know about the speeches and remarks that Mike Pompeo made in the United States, while Chinese media do not report on criticism that foreign governments and officials make about China?

People in the mainland, where the state controls media very strictly, even don’t know about the month-long massive protests in Hong Kong because the general public in China only have access to state-run official media outlets such as CCTV, Xinhua News, etc.

Second, why and how the “scholars” suddenly become able to respond to a foreign government?

No one in the region, including Uyghurs, dares or tries to respond to international affairs publicly so far, and they have been keeping silence on issues such as the so-called transformation through education camps. Uyghur scholars have been silenced by the CCP on many of the world affairs and current topics, such as the September 11 terrorist attack, the Iraq War, the emergence of ISIS, Israel-Palestine conflict, Brexit, the Japanese tsunami, etc.

No Uyghur scholar nor government officials have been allowed to respond to incidents happened within the Uyghur region, such as the incidents in Hotan (2014), bilingual education policy (since 2010), Communist-government-subsidized influx of Han migration into region (largely since 1980), transferring  hundreds of thousands of Uyghur workers to inland China (2009), unemployment rate of Uyghurs (since 2000), forceful marriage of Uyghur women to Han Chinese (2017), the disappearance of thousands of Uyghur children (since 2010).

Yet at this time, all of a sudden, so many “scholars” are allowed to come together and write to Mike Pompeo with the same voice. How is it possible that China became an open society overnight?

Third, why didn’t the really prestigious and prominent scholars among Uyghur society sign this letter?

There are thousands of Uyghur scholars and intellectuals that can represent Uyghur people in media, academia, culture, and business. However, we do not see their names in this letter. These so called “scholars” and “intellectuals” who signed are only people who work for the Chinese government and have been the voice of the Chinese government on many issues. So, can this letter speak for the reality in the Uyghur region and represent the real voices of at least 15 million Uyghurs and other Turkic people in the region?

Many well-known Uyghur intellectuals were reported disappeared and detained since the 2017 large scale anti-Uyghur campaign kicked off in the region. For this reason, we want to ask the Chinese government: where are those well-known, prominent Uyghur scholars?

Where are more than 20,000 religious scholars and imams, who did not sign this letter, yet would be the best speakers about Chinese religious policy?

The letter was published just one day after the speech Secretary Mike Pompeo delivered at the Ministerial. We can only assume that the letter was pre-written by the CCP to guarantee an instant response to his remarks. Otherwise, how can so many people come together and write a joint letter, sign it and publish it so quickly?

This joint letter was prepared and organized by the propaganda department of CCP and cannot represent the standpoint and opinion of the Uyghur people, who is living under unprecedented pressure and covert ethnic genocide policies.

Uyghurs in the homeland and around the world extend their heartful gratitude to Secretary of State Mike Pompeo. They need the United States government and other foreign governments to stand up for their rights and do more to save a people under existential threat from the Chinese Communist government.