The U.S. Commission on International Religious Freedom releases its 2019 report. It denounces persecution and torture of Uyghurs and other Muslims, Tibetans, house church Christians, members of Falun Gong and The Church of Almighty God. 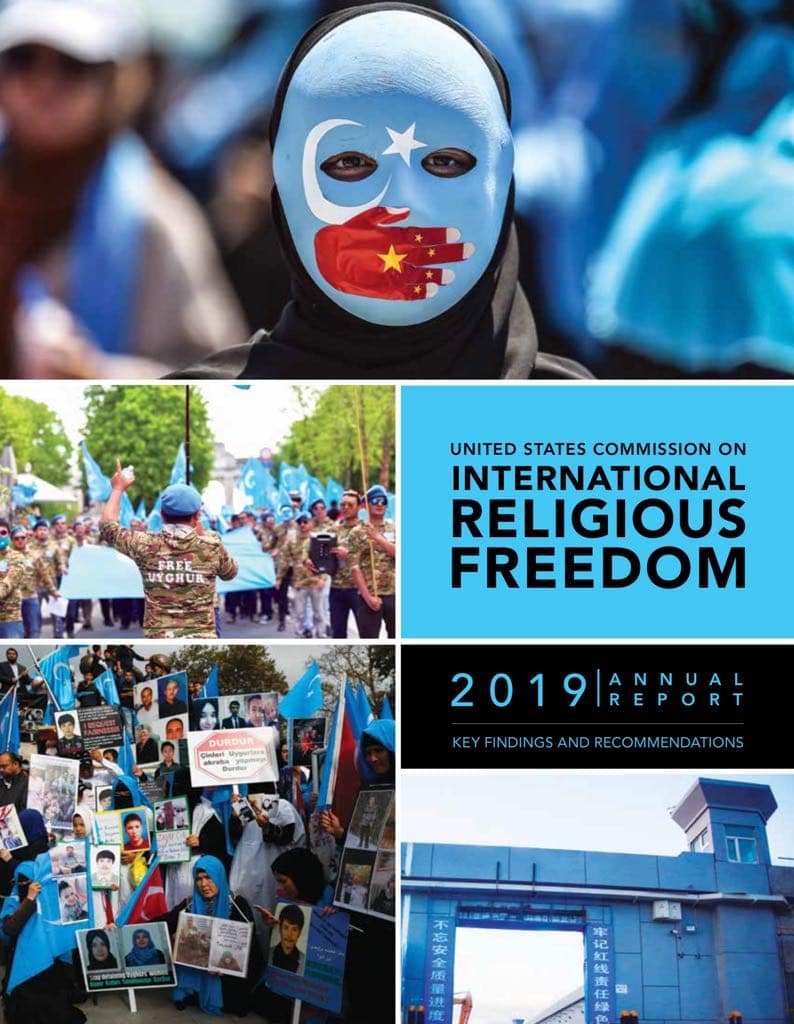 The U.S. Commission on International Religious Freedom (USCIRF) is an independent commission of the U.S. Federal Government, created in 1998 to monitor the situation of religious liberty outside of the United States. Its yearly international report is regarded as one of the most authoritative assessments of the status of religious freedom internationally. The 2019 report was unveiled on April 29 in Washington DC. Not surprisingly, it includes China within the  group of the most egregious violators of religious freedom in the world, together with North Korea, Russia, and others.

The report notes how the New Regulation on Religious Affairs, which came into force in 2018, “effectively ended the legal gray area that had existed for independent religious activity since the early 1980s.” The transfer of the jurisdiction over religious affairs from the State Administration of Religious Affairs (SARA) to the United Front Work Department (UFWD), is also seen as a negative development. “For many religious groups,” the report notes, “this meant the end of working relationships they might have had with SARA officials and the removal of a buffer—however limited—between religion and party.” In fact, “in September, the UFWD launched its first nationwide program to monitor the implementation of religious policies in provinces and municipalities across the country.”

The report also notes that “international criticism of China increased during the latter half of 2018 as the scale of the government’s crackdown on religious freedom and related human rights became more widely publicized,” mentioning in particular the Universal Periodic Review of China. In short, “in 2018, the Chinese Communist Party (CCP) became increasingly hostile toward religion.” The “sinicization” meant more control and more repression. “Even followers of Mahayana Buddhism and Taoism (also spelled Daoism), faiths that the government generally has viewed as part of China’s ‘traditional cultures,’ experienced greater restrictions on their religious activity. In 2018, local authorities also closed or demolished dozens of Buddhist and Taoist temples, as well as statues of the Buddha and Lao-Tzu.”

Uyghurs and Other Muslims in Xinjiang

The report quotes an estimate of the U.S. State Department, that the CCP since 2017 has “detained 800,000 to possibly more than two million Uighur (also spelled Uyghur), Kazakh, Kyrgyz, and other Muslims in internment camps” in Xinjiang. The CCP “initially denied the existence of the camps, but later defended them as a means to combat terrorism and provide vocational training. However, the detention of prominent doctors,  professors, businessmen, and other professionals  belied the  government’s  justification for the camps.”

The report quotes Uyghur human rights groups’ documents, which claim that “among the detainees were at least 242 Uighur public intellectuals, including artists, journalists, and university professors, as well as 96 students. Most of the detainees have not been charged with a specific crime, but rather were detained for religious behavior deemed ‘extremist,’ such as having an ‘abnormal’ beard, wearing a veil, accessing religious materials online, or participating in other ‘illegal religious activities.’” Camps are not peaceful “schools.” “Detainees routinely faced harsh treatment and unhygienic conditions in overcrowded facilities, leading to several reported deaths.”

Nor is the situation tolerable in Xinjiang in general. “Outside the camps, the Chinese government continued to use intrusive measures to create an ‘open-air prison’ in Xinjiang, including discriminatory profiling at armed checkpoints and police stations; travel restrictions both within and outside of China; and Global Positioning System (GPS) tracking systems, facial and iris recognition, DNA sampling, and voice pattern sampling to monitor Muslims […]. Thousands of mosques have been shuttered or destroyed.”

The report also describes the bizarre “Pair Up and Become Family” program, which “deployed more than one million local government workers to live in Muslim households for at least five days every two months to assess each family’s ideological views and report on any religious activity.” These so-called “relatives” “attended private family functions such as weddings and funerals, shared meals, posed in family photographs, and even slept in the same beds as their hosts.”

USCIRF also denouncement surveillance and harassment by CCP of Uyghurs living overseas, including in the United States.

The report notes that Hui Muslims, i.e. Chinese-speaking Han Muslims, “have not experienced the same scale of repression as Uighur Muslims.” But “they did face increased restrictions on religious activities during the year.” In December 2018, “local authorities shut down three mosques in Yunnan Province, claiming they had conducted ‘illegal religious education.’” The CCP authorities had also “planned to demolish the newly built Weizhou Grand Mosque in August, but were forced to postpone the demolition after hundreds of Muslims protested.”

In Ningxia and Gansu provinces, meanwhile, the CCP “removed Arabic signs from buildings and forcibly closed Arabic-language schools.” The fact that “in November, officials from Ningxia went to Xinjiang to study the internment camps and signed a ‘counter-terrorism co-operation’ agreement” with Xinjiang authorities, does not augur well for future developments.

The USCIRF confirms that “in 2018, the Chinese government continued to pursue a strategy of forced assimilation and suppression of Tibetan Buddhism throughout Tibet.” Schoolchildren are prevented from attending religious festivals and learning Buddhist religion and Tibetan language.

In  February  2018, “the TAR [Tibet Autonomous Region] Public Security Bureau published a list of ‘organized crimes,’ which effectively banned civil society initiatives to promote Tibetan language and culture.” In August 2018, “the government introduced a policy requiring monks and nuns to demonstrate ‘political reliability,’” i.e to cooperate with the CCP, spread political propaganda, including fake news against the Dalai Lama, and report opponents to the police.

The control is also harsh against Tibetans living in regions of China outside of Tibet. “In recent years”, the report notes, “authorities forcibly evicted thousands of monks, nuns, and laypersons living in the monastic communities of Larung Gar and Yachen Gar in Sichuan Province and forced many of them to attend ‘patriotic reeducation classes’ for up to six months. In October 2018, Chinese authorities banned Larung Gar from holding the Dechen Shedrub festival—a major Tibetan prayer event—for the third year in a row. In December, authorities in Qinghai Province banned monasteries from teaching Tibetan language classes to children.”

Tenzin Dorjee, USCIRF’s chair, supplemented the report with “individual views” implying that the situation in Tibet may be, in fact, even worse.

Despite the Vatican-China deal of 2018, the report claims that dissident Catholic priests and laypersons are still persecuted, with “widespread reports of Chinese authorities closing underground Catholic churches, destroying crosses, confiscating Bibles and other religious materials, and otherwise restricting or interfering in religious activities. The crackdown has been especially severe in Henan Province.”

One of the USCIRF Commissioners, Johnnie Moore, included in the report his “individual views” (not endorsed by the other Commissioners) that the Vatican “made a terrible mistake” by signing the 2018 deal, and  “now bears a significant moral and legal responsibility to help solve the problem which it helped created—albeit inadvertently—by providing China license to viciously crack down on Christian communities (as cited in this report), and by providing the Chinese government further cover to continue its incomprehensible, inexcusable and inhumane abuses of Muslim citizens in the western part of the  country.”

The report notes that “the Chinese government also intensified its crackdown on Protestant groups that refused to join the state-run Three-Self Patriotic Movement.” “According to religious freedom advocates, more than 5,000 Christians and 1,000 church leaders were arrested in 2018 because of their faith or religious practices.” The CCP “closed down or demolished thousands of churches or religious sites, including Zion Church in Beijing; the Golden Lampstand Church in Shanxi Province; and the Bible Reformed Church, House of David Church, and Rongguili Lane Church in Guangdong Province. On December 9, police officers raided the Early Rain Covenant Church in Chengdu, Sichuan Province, and arrested Pastor Wang Yi and more than 100 congregants. Some of the  congregants who were later released claimed that police had beaten them and forced them to sign a pledge renouncing the church. In December 2018, Pastor Wang and his wife were charged with inciting ‘subversion of state power’; at the end of the reporting period, they remained in secret detention while awaiting trial.”

The CCP banned “online sales of the Bible” and moved to “replace crosses, pictures of Jesus, and other symbols of the Christian faith with images of Xi Jinping. In Henan Province, local authorities required churches to remove the first commandment from lists of the Ten Commandments on the grounds that it placed loyalty to God above loyalty to the CCP.”

The USCIRF reports that at least 931 Falun Gong practitioners were imprisoned in 2018. “There were reports that many of the detainees suffered physical violence, psychiatric abuse, sexual assault, forced drug administration, and sleep deprivation.” Attorneys defending Falun Gong members were also harassed.

Although the CCP claims that organ harvesting has been discontinued, “in 2018, human rights advocates, medical professionals, and investigative journalists presented additional evidence that the practice continued on a significant scale.”

The Church of Almighty God

The report reiterates that “under article 300 of the Chinese Criminal Code” belonging to a group the CCP has banned and included in its list of the xie jiao “is punishable with three to seven years’ imprisonment or more.”

Based on this provision, the report states, “in 2018, the Chinese government harassed and arrested thousands of followers of […]  xie jiao groups, including The Church of Almighty God. Many of those detained during the year—whom The Church of Almighty God estimates to be in the thousands—suffered torture and other abuses, in some cases resulting in deaths or unexplained disappearances while in custody.”

Religious movements in China end up in the list of the xie jiao for two reasons: they are perceived to be critical of the Chinese Communist Party (CCP), and their rapid growth scares the Party. According to governmental sources, although founded as recently as 1991, the CAG has now four million members in China, a spectacular growth that finds a precedent only in Falun Gong (persecuted for the same reasons).

These atrocities cannot remain unanswered. Hopefully, the USCIRF report will generate adequate reactions among U.S. politicians and the Trump administration. The evidence of Chinese persecution of religion is massive. Now, it is the time to act. 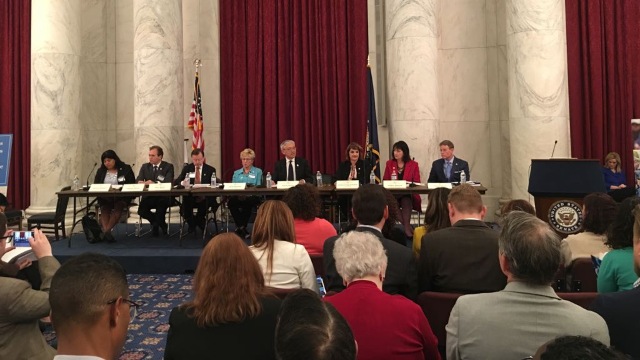