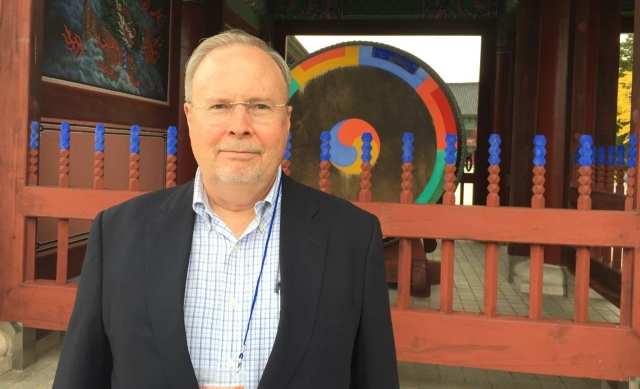 Hong Kong scholar Edward Irons explains the historical roots of the proscription of certain groups as xie jiao (heterodox teachings), and how being on the list of the xie jiao means being a main target for persecution.

Edward Irons is a well-known Hong-Kong-based researcher, consultant, and writer on Chinese culture and religion. He specializes in Yiguandao and other Chinese new religions, as well as leadership studies. He obtained his PhD from the Graduate Theological Union in 2000. He is the Director of the Hong Kong Institute for Culture, Commerce and Religion, which he founded in 2003.

Irons has studied in depth the repression of certain religious groups in Nationalist and Communist China, persecuted as “cults” or “heterodox teachings” (xie jiao). These notions are not always clear, even for scholars, and we have asked Dr. Irons to help us clarify them.

We know that “heterodox” groups were repressed in Imperial China and that the expression xie jiao originated in the Ming era. But today we will not go so far, and start from the crackdown on certain religions in Nationalist China in the 1930s. This may come as a surprise to some, as the Nationalists after all were not the Communists, and were not officially atheistic. Which groups were persecuted and why?

What happened in the 1930s serves as background to developments under the People’s Republic.  We can even go further back, to the late-Qing period, to find the origin of anti-religious sentiment. Anti-superstition and anti-tradition were growing intellectual trends among most educated Chinese  beginning  in the late  Qing, roughly the last half of the 19th century.  The  version  of  modernity  promoted by many intellectuals  left  no  room  for  popular religious  practices  like spirit  writing  or  cultic  worship. The  Kuomintang (KMT), which came to power in 1927,  offered  something else,  an  ideology  of rationality. In  addition,  organized  religions  such  as Buddhism were widely  perceived  as  being  backward,  inhibiting  China’s transformation  into  a  modern  nation. Temples held large parcels of land, which was seen as unfair.  And monks were seen as being low-educated and not sincere in religious practice.  Article  6  of  the  Republican constitution  guaranteed  “freedom  of  belief.”  At the same time the government  also  maintained  a strict  separation  of  church  and  state.

So between  1927  and  1931  the  Republican  government  launched  a  formal campaign  against  superstition  and  institutional  religion.  The  government  waged consistent  warfare  against  Buddhism  in  particular.  There  was  sporadic  but widespread  confiscation  of  the  property  of  Buddhist  and  local  deity  temples.  This campaign  is best  seen  as  an  outgrowth  of  the  powerful  nationalistic  movement dating  from  1919.  This movement desired for China to become modern.  There was strong sentiment against tradition and superstition.  The  KMT  translated  this  attitude  of  anti-superstition  into  policy,  as  would  the  People’s  Republic  after  1949.  The campaign  against  superstition  only  ended  when,  in  1934,  KMT  leader  Chiang Kai-shek  (蔣介石,  Jiang  Jieshi,  1897–1975)  launched  his  own  spiritual  program, the  New Life Movement (新生活運動, xinshenghuo yundong).

The Nationalist government focus was mainly on established Buddhism.  Ironically, many new organized religious groups rose up during the 1920s and 1930s.  Some were Buddhist, some Daoist, and some Christian.  I don’t think any of these were prominent enough to cause concern in the Nationalist government, except for one, Yiguandao.

The Chinese Communist Party (CCP) rose to power and there was in the 1950s another massive crackdown on certain religious groups, targeting in particular Yiguandao, a very successful non-Christian new religious movement, millions of members of which were arrested. Why Yiguandao? Can you tell us what happened?

Yiguandao is a Chinese syncretic religion. First established in its modern form in the 1930s, it has deep roots in Chinese popular belief systems. According to some sources, in 1947 it had grown to twelve million members. Yiguandao was outlawed and actively suppressed as part of the Anti-Heterodox Groups and Secret Societies Movement (fandong huidaomen 反动会道门) of 1951–1953. Other groups were suppressed as well, but it appears that Yiguandao was the main target.  Millions of devotees were arrested. Yiguandao leaders were thrown into prison and from some accounts killed outright.  Within a few years, Yiguandao was extinguished as a religious network in Mainland China, and it remained only as a faint cultural memory from the 1930s and 1940s. It is still active in Taiwan, divided into various branches, with some 800,000 followers.  Yiguandao temples and temple networks are also found in Hong Kong, Korea, and Japan; throughout Southeast Asia; and in most countries of Europe and North America.

Why was Yiguandao so severely persecuted? Marxist ideological antagonism toward religion in general is well  known. In addition,  religious leaders were often personally associated with the ruling classes.  In Yiguandao’s case, the movement had grown rapidly throughout the war against Japan, especially in areas of China under Japanese occupation.  This rapid growth caused people to wonder if the group had a special relationship with the puppet regime propped up by the Japanese.  Immediately after Japan’s surrender, there were rumors of collusion.  So Yiguandao was not only a large, well-organized religious group, it was seen as being unpatriotic.

The situation of course changed with the Cultural Revolution, when all religions were persecuted. And then, it changed again…

The  early  1960s  was  a  period  of overt  antagonism  to  all  forms  of  religion. This  hostility  relaxed  with  the  economic  reforms  introduced  from  1979.  But religion  was  not  a  topic  that  could  be  overlooked.  Religious  shocks  such  as  the Falun  Gong  demonstrations  in  1999  and  the  rapid  rise  in  non-official Christianity in the countryside  posed challenges to  the  government.  From  the  1990s,  the  state  chose  to  target  specific  religious  groups.  These groups  have  been  prominently  declared  illegal  and  suppressed  by  the  various security  bureaus.  This  targeted  approach  differed  from  the  1950s  and  60s,  in which  the  government  made  broad  proscriptions  focused  on  “religion”  as  a category of thought and action that  was  harmful  or false.  The  new  focus  moved  to specific  groups  that  were  deemed to  be  harmful  and  thus illegal. Of  course,  individual  groups  inside  China  had already  been  proscribed,  starting  with  the  “Shouters”  in  1983.

How did the singling out of certain groups as xie jiao started?

Following  the  Falun  Gong  incident  of  1999,  the  Public  Security  Bureau established  a  new  organ,  the  Public  Security  Anti-Xie  Jiao  Organization  (公安部反邪教组, gonganbu  fanxie  jiao  zu),  called  informally  “the  610  Office,”  to  focus  on xie  jiao  groups.  In  November  of  2000,  another  organization  was  established, the China Anti-Xie Jiao Association, commonly known in English as “the China Anti-Cult  Association”  (中国反邪教协会, zhongguo  fanxie  jiao  xiehui,  abbreviated  as  CACA).  A  distinction  should  be made between  such  government  offices,  which  may  use  the  term  “anti-cult”  in  their English  translations,  and  overseas  civil  society  groups  dedicated  to  fighting “cults.”  The  Chinese  institutions  in  fact  are  all anti-xie  jiao.  Officially,  CACA  is  a voluntary,  non-profit  organization.  In  practice,  the  media  appears  to  treat  its announcements,  for  instance  the  June  4,  2014  front-page  article  on  xie  jiao groups,  as  official  government  notices.

You have studied extensively the Chinese lists of xie jiao. How did these lists come to be established?

Since  the  mid-1990s,  illegal  and  banned  groups  have been  categorized  and  controlled  through  designation  as  xie  jiao.  At  some  point  in the  1990s,  a  specific  list  of  exactly  which  groups  are  categorized  as  xie  jiao  was compiled.  This  list  has  generated  great  interest  in  the  international  media.  The  first  extensive  compilation  included  overseas  groups  such  as  the  Branch Davidians  and  Aum  Shinrikyo.  In  this  initial  version,  the  focus  was  on  potentially dangerous  overseas  groups;  xie  jiao  became  analogous  to  the  term  “cult”  as  used in  other  countries.  But  in  1995,  the  list  was  expanded  to  designate  groups deemed  to  be  not  only  dangerous  but  also  heretical.  Heretical here means not following doctrine of the five officially sanctioned religious bodies in China—Protestantism (the Three-Self Church), Catholicism, Buddhism, Daoism, and Islam.  Many  of  the unsanctioned groups  were  homegrown  and  had  evolved  out  of  the  Protestant  traditions;  only  one  group  on  the initial  list,  Supreme  Master  Ching  Hai,  was  based  outside  Mainland  China.  Later  that  year,  the  list  was  expanded  by  the  inclusion  of  more local  Protestant  groups  and  such  overseas  groups  as  the  Children  of  God (the Family)  and  the Unification  Church.  The Falun Gong incident  of 1999, in which thousands of followers  surrounded the  senior  leaders’  compound  in  Beijing,  spurred  the  government’s  thinking  on xie  jiao.  For  the  first  time  a  well-organized  group,  one  that  had  been  nurtured through  government  support,  was  seen  as  a  threat  to  China  and,  more  seriously, to  the  CCP.  The  Ministry  of  Public  Security  in  1998  designated  Falun  Gong  as  a xie  jiao.  As  if  to  clarify  the  implication,  xie  jiao  organizations  were  formally  made illegal  by  a  legislative  resolution  in  1999.  It  was  at  this  time  that  the  “610”  anti-cult  unit  was  established.  The  State  Council  in  2000  followed  this  up  by establishing  a  separate  network  of  offices  to  deal  with  xie  jiao. The  government  had  published  the  updated  list  of eighteen xie jiao in 1995.  The Shouters and The Church of Almighty God were included.

What are the consequences of being included in the list?

Inclusion on the list means the group is not seen as a “religion,” but simply as an illegal organization.  So this  list  has  had  an  immense  influence  on  the  perception  of  new  religions. Being on the list means the  full  weight  of  state  coercion  can  be  applied against  any  individual  associated  with  any  of the groups  on  the  list. Article 300 of the Chinese Criminal Code makes “using,” i.e. being active in a xie jiao, a crime punishable by three to seven years of imprisonment “or more.”  This  level  of  severity echoes  the  nearly  absolute  suppression  of  Yiguandao  and  other  religious  groups in  the  1950s.  For  Falun  Gong,  as  with  Yiguandao  before  it,  the  only  way  to survive  was  to  move  overseas,  away  from  the  direct  influence  of  the  Chinese  state.  Being seen as an  illegal  entity forces many groups  members  to  “go  underground.”  Finally, the  xie  jiao  list  also acts  as  the  conceptual  opposite  pole  to  allowed  religions. As  a  result,  any  group  not  belonging  to  one  end  of  the  spectrum  or  another  is cast  into  a  limbo  of  uncertainty. Some  religious groups  have scurried  to  head  off  the  threat  of  inclusion  on  the  xie  jiao  list.  Overseas religions,  including  the  Church  of  Jesus  Christ  of  Latter  Day  Saints  and Scientology,  have initiated  discussions  with  the  Chinese  government  to  explain  their peaceful  intentions.  Finally,  these  lists,  publicized  so  widely,  have  given  scholars a  valuable  window  on  official  policy  regarding  what  counts  as  acceptable  religious behavior, and what is suppressed and persecuted.