The CCP continues to persecute Christians from abroad under the pretext of “resisting foreign religious infiltration.”

Ever since the adoption of the Plan for the Special Campaign on Legal Investigation and Prosecution of South Korean Christian Infiltrations last year, Christian churches affiliated with  South Korea have come under harsh suppression:  many missionaries arrested and deported, while those remaining in China face an increasingly difficult situation.

In late-April, a South Korean pastor was training house church preachers at a hotel in Zibo city in the eastern province of Shandong. After a tip-off to the authorities, more than ten officials from the city’s Religious Affairs Bureau, Public Security Bureau, and other departments raided the church, and the police took away the pastor.

According to a Chinese preacher who requested anonymity, police officers told the pastor during interrogation that it was illegal for foreigners to preach in China. Only China’s nationals with pastoral certificates issued by the Chinese government are allowed to do so, the officers claimed. The pastor had to pay a fine and was later deported to South Korea.

Another house church meeting venue with ties to South Korea was also shut down in the area.

Another South Korean missionary established a church in Shandong more than ten years ago. Alongside his religious activities, he also ran a business in China.

Because South Korean missionaries are deported home immediately after the CCP discovers them, a Chinese preacher had to take over the management of the church. According to him, the South Korean missionary was extremely cautious when holding gatherings, which had not been held at a fixed location for security reasons. To disguise the real intentions for meetings, cosmetics, leather bags, and other goods are always on display to tell officials that the preacher is selling them, if an unannounced inspection visits the location.

After personnel from the local neighborhood committee came to one of the church’s meeting venues, asking if any foreigners were in attendance, the Korean preacher stopped holding gatherings for larger congregations. Instead, he preached at his office for small groups of South Koreans.

Since the religious persecution intensified in Shandong after the arrival of a central inspection team, the Religious Affairs Bureau started pressuring the Chinese preacher with questions about the church’s connections with South Korean missionaries. Afraid of being persecuted and deported, the South Korean preacher was forced to stop going to gatherings whatsoever.

A visit to China by a South Korean missionary, who founded a church in the southern province of Guangdong over a decade ago, was cut short this May. He left for South Korea the same day he arrived, after a Chinese preacher from his church warned him of CCP’s intensified inspections. 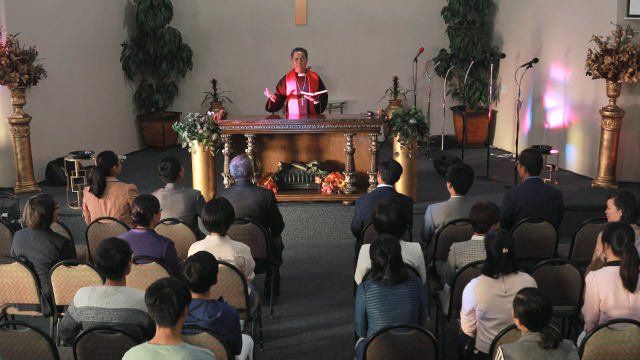 The Chinese preacher has been in charge of managing the church for a long time because of frequent harassment, and has been interrogated by the local government.

Since last year, officials have repeatedly interrogated the preacher about the origins of his relationship with the Korean missionary, demanding to provide them with his contact information. Police officers showed a photo of the South Korean missionary and his entry-exit records to China, asking the preacher to confirm that he was the church’s founder. The preacher was ordered to stop holding gatherings and forced to sign a “statement of guarantee,” promising to cease participating in foreign-related religious activities, as a preventative measure against “foreign spies infiltrating China, endangering national security, and leaking state secrets.”

In May, the police once again questioned the preacher about the missionary’s whereabouts and ordered him to close down the meeting venue.