Ten NGOs write to the new president of Kazakhstan demanding freedom and protection for a woman who escaped from China and the activist who defended her. 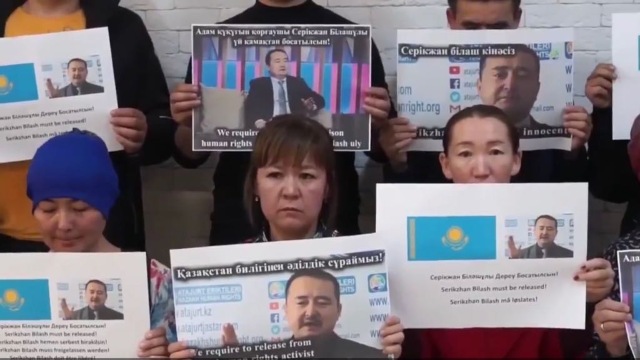 President of the Republic of Kazakhstan

The ethnic Kazakh Muslim minority is now persecuted and discriminated in China. At least 10,000 ethnic Kazakhs are detained in the dreaded transformation through education camps, which are not “schools” but jails.

An ethnic Kazakh woman, Sayragul Sauytbay, escaped one of these camps in 2018 and managed to flee to Kazakhstan. Since she entered the country with a false passport, she was arrested and threatened with deportation back to China. We applaud the decision of the Kazakh judiciary, which blocked her deportation. However, her asylum has not yet been granted, and without asylum her situation remains very much precarious.

We have followed with interest the efforts on behalf of Sayragul Sauytbay and of ethnic Kazakhs detained in China of the human rights group Atajurt and his president, Mr Serikzhan Bilash. The fact that he was arrested on March 10 and is still under house arrest is cause for concern.

And we are even more concerned when we hear that both Sayragul Sauytbay and Serikzhan Bilash, and even their lawyer, the internationally respected Ms Aiman Umarova, are under continuous pressure not to speak up publicly against the horrific situation of the ethnic Kazakhs detained in the “transformation through education” camps in China.

We fully understand that China is an important commercial partner for Kazakhstan, as it is for many other countries, and that preserving good relations with the Chinese government is important for you. However, we also believe that Muslim ethnic Kazakhs escaping China, where their human rights and religious liberty are denied, should be granted asylum in Kazakhstan as the international conventions mandate, and that the freedom of speech of both refugees from China and Kazakh human rights activists to denounce what is going on in the “transformation through education” camps should be protected.

We respectfully urge Kazakhstan to grant asylum to Sayragul Sauytbay, to free Serikzhan Bilash, and to guarantee the freedom of speech, including the freedom to criticize the systematic violations of human rights and religious freedom in China, to Sauytbay, Bilash, their lawyer Umarova, and any other refugee or activist who wants to speak out the truth about what is going on right now in China.

We are confident that Kazakhstan will honor the international treaties it has subscribed and confirm, also with respect to the cases of Sauytbay and Bilash, its commitment to favor the pacific dialogue between religions and to protect religious liberty and human rights.

LIREC (Center for Studies on Freedom of Belief, Religion and Conscience)