In the past year, not only unregistered house churches but also state-controlled Three-Self churches in Hubei suffered severe clampdowns.

In 2019, authorities throughout the central province of Hubei intensified crackdowns on places of worship ahead of the central government’s religious work inspections, resulting in numerous closures of churches. From March to October, at least 40 Protestant churches were suppressed in Hubei’s capital Wuhan alone. Bitter Winter has received more information about the attacks on Protestant places of worship – house churches and Three-Self churches alike.

A meeting venue tricked into demolition

On May 2, officials from the Yanwo town government, administered by the county-level city of Honghu, ordered to demolish a Three-Self church venue, claiming that its “certificate was substandard.” Faced with protests from congregation members, the officials had to back down. Still, they insisted on removing the church’s cross in exchange for saving the building.

Eight days later, a town government official approached the person in charge of the venue again to tell her that the building has to be torn down “to implement the state’s policies.” To make her sign the demolition agreement, the official promised a compensation. The venue was demolished the same night.

An eyewitness told Bitter Winter that believers were pleading officials not to take away their place of worship, but the venue was turned into ruins regardless. Unsurprisingly, the congregation has not received any government compensation. “The promise of reimbursement was an obvious trick to make believers let down their guard,” a villager commented.

In late March, government officials and the police raided a house church venue in the Wuchang district of Wuhan. A congregation member said that he found the place in a total mess: broken glass everywhere, the air conditioner and projector gone, a hole in the roof, and the church’s signboards smashed.

In May, provincial government officials came to inspect preparations ahead of a cycling race to be held the next month on Tongcheng county’s Huangpao Mountain. One of them was displeased to see the towering cross atop a Three-Self church in Ditian village at the foot of the mountain. He ordered the county’s Religious Affairs Bureau to remove it, saying that “it looks conspicuous, make it vanish right away.”

Shortly after, the church’s in-charge was commanded to take down the cross, but he refused. Officials pressured on, saying that the area was “a revolutionary base, and no religious symbols were allowed.” “If you don’t tear it down, you’ll be fined and arrested,” they threatened the person in charge. Quite soon, the Religious Affairs Bureau hired workers to demolish the cross.

The same fate befell Penggang Church, a Three-Self church in Wuhan’s Huangpi district, after local government officials ordered to demolish the church’s cross on June 9. They also confiscated Bibles and demanded the church’s elder to tear down the signboard and Christian couplets, claiming that “any religious symbols are forbidden to be posted in the church.” The officials ordered the elder “to study traditional Chinese culture, CCP’s regulations, and state laws instead.”

The same month, the cross was dismantled from another Three-Self church venue in the Huangpi district. Government officials hung a poster about the new Regulations on Religious Affairs in the church and ordered the church’s pastor in his 80s “to study the Party’s spirit.”

“There are no human rights in the country ruled by the CCP,” a congregation member told Bitter Winter. “Only the CCP can decide what is right and what is wrong. It wants to manipulate the entire world and make everyone worship it.”

The True Jesus Church has been suffering continuous crackdowns even though it joined the Three-Self Patriotic Movement years ago. In May, Wuhan’s Municipal Bureau of Ethnic and Religious Affairs issued a notice, ordering to eliminate “True Jesus Church” signs throughout the city, threatening to demolish the churches that refuse to do so. As a result, all such signs have been removed. 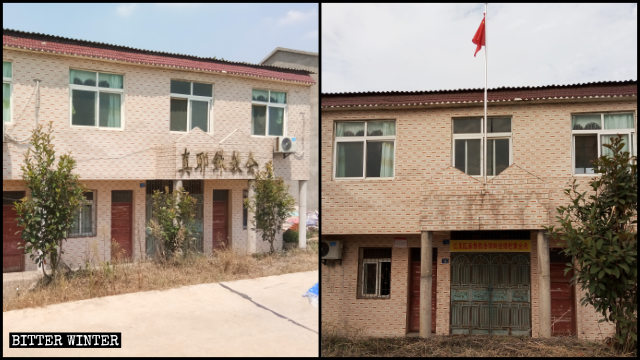 On November 4, the government of Jiangxia district in Wuhan organized training for preachers from 37 Three-Self churches. During the event, officials required the clergy members to expound the core socialist values with the Bible, threatening to take away preaching certificates from anyone who would dare to disobey and close down their churches.

“The CCP blends the core socialist values with the Bible, aiming at changing the essence of our belief and forcing us to accept the Communist Party’s values. In the end, we’ll be allowed only to worship the Communist Party. They’re truly sinister,” one of the preachers commented.