Founded in 1917, and severely persecuted in the 1950s, this movement whose story is told in a new scholarly book by Melissa Inouye, accepted to join the Three-Self Church—but is now at risk again.

According to some scholars, 80% of the Chinese Protestants are “Pentecostal.” The label is, however, ambiguous. The CCP sometimes uses it in a negative sense, as a synonym for Christians engaged in “superstitious” practices. Very few Chinese Christians self-identify themselves as “Pentecostal.” Scholars in the West increasingly distinguish between a larger group of “charismatic” churches, emphasizing the gifts of the Holy Spirit such as speaking in tongues, healing, prophecy, and exorcism, and “Pentecostal” bodies deriving directly or indirectly from the tongue-speaking revivals of the early 20th century, particularly those in the United States (particularly at the Azusa Street Church in Los Angeles in 1906) and in Wales. Charismatic communities exist also within non-Pentecostal churches (for example, the largest Catholic lay movement is the Catholic Charismatic Renewal), while Pentecostals are characterized for their doctrine that speaking in tongues is the necessary evidence that the devotee has been “baptized in the Holy Spirit.”

While most Chinese communities labeled as “Pentecostal” are, in fact, charismatic, one large Chinese body can rightly be recognized as part of global Pentecostalism. It is the True Jesus Church (真耶穌教會), which originated from a vision Wei Enbo (魏恩波, also called Paul Wei, 魏保羅, 1879-1919) received in late May 1917. The story of Wei and his church has now received adequate academic attention in the book by Melissa Wei-Tsing Inouye, a lecturer at University of Auckland, New Zealand, China and the True Jesus: Charisma and Organization in a Chinese Christian Church (New York: Oxford University Press, 2018).

Wei Enbo and the Origins of the True Jesus Church

Following Inouye’s reconstruction, Wei worked as a cloth merchant in Beijing. Originally a poor street vendor, he became a rich and respected shop-owner after he converted to Christianity and joined the Beijing congregation of the London Missionary Society led by British missionary Samuel Evans Meech (1845-1937). There is no reason to doubt Wei’s and Meech’s Weberian explanation that the Chinese merchant owed his prosperity to his newly adopted strict Protestant work ethic. But it is also true that Wei advertised that his were Christian shops, which fellow converts to Christianity were encouraged to patronize.

Another key character in Wei’s story is Norwegian missionary to China, Bernt Berntsen (1863-1933). When he read about the 1906 Azusa Street Revival, Berntsen became so enthusiastic that he booked a ticket to go to Los Angeles from China and see with his own eyes. In Los Angeles, he was baptized in the Holy Spirit, spoke in tongues, and decided to go back to China to spread the newly born Pentecostal faith. The name he used for his new body, in fact the first Pentecostal Church in China, was Apostolic Faith Church, a name adopted by different Pentecostal churches throughout the world, not necessarily connected with each other.

In 1915, Wei was introduced to Berntsen and quickly joined the Apostolic Faith Church. Berntsen and Wei became best friends, but soon made the mistake that destroys so many friendships. They became business partners, and started quarreling about the business. Eventually Berntsen, who had expected to recover quickly his investment in Wei’s shops but didn’t, sued the Chinese partner for his money.

It is possible that the lawsuit was also connected with theological disagreements. As mentioned earlier, in May 1917 Wei reported to have heard a voice telling him that “you must receive the baptism of Jesus.” He proceeded to Beijing’s southern Yongding Gate, where the voice led him to a nearby river and told him he should be baptized facedown. Wei then saw Jesus himself, who baptized him in the river and equipped him with an armor and a sword. Then Satan appeared, but thanks to the sword and the armor Wei was able to defeat him.

As Inouye notes, there are different versions of this first vision, but what is clear is that Wei left the Apostolic Faith Church and proceeded to gather followers into his own denomination, which he called the True Jesus Church. The beginnings were difficult, but soon the church gained several thousand members and expanded throughout China. These first devotees were asked to believe that Wei’s vision has restored the true Christian church, that Wei as “the new Martin Luther” (1483-1546) had been sent to expose the errors of the Catholic and Protestant churches, and that the baptism facedown, speaking in tongues, celebrating Saturday rather than Sunday as the Lord’s day, and washing each other’s feet were necessary features of the only true church.

Inouye’s book is less rich of details about theology. Because it celebrates Saturday and not Sunday, the true Jesus Church belongs to the Sabbatarian wing of Pentecostalism. Other scholars discuss whether it also belongs to the non-Trinitarian “Oneness” Pentecostalism. Its official statements of faith explain that “we do believe and agree that God is one, that Jesus Christ is God, and that the Bible does make a distinction between the Father, the Son and the Holy Spirit. But we cannot fully agree with the trinitarian view of God,” because the word “Trinity” is not found in the Bible and was adopted more than one century after Jesus’ death in a misguided effort to offer a rational explanation for the Christian God.

Most Pentecostal bodies were also millenarian. Wei’s was no exception. He predicted the end of the world between 1921 and 1922. He did not live to see the failure of this prediction, as he died of tuberculosis on September 10, 1919. On his deathbed, Wei reconciled with Berntsen, but the latter did not join the True Jesus Church.

Despite the failed prophecy, the church continued to expand, but had to experience also the first of several schisms, led by the True Jesus Church’s leader in Southern China, Zhang Dianju (張殿舉, Barnabas, 1880-1961). In 1929, he claimed that he was the real founder of the church rather than Wei and was promptly expelled. Among several regional leaders, Wei’s son, Wei Wenxiang (魏文祥, also called Isaac Wei, 魏以撒, ca. 1900-?) eventually emerged as the one that created an effective bureaucratic structure at the local, national, and international level, as missions abroad had started in the meantime.

The process of bureaucratization of the True Jesus Church was interrupted by war and revolution. The headquarters had to repeatedly move from one city to another. With the Communist victory, the church leaders decided to cooperate with the CCP and to sign several documents praising its internal and international politics. This did not save them from arrest. In 1951, Wei Isaac was arrested. He had to publicly confess to “have been pro-American and against Soviet Russia, the Party, and the People,” and disappeared into the system of CCP’s concentration camps. His date of death is unknown.

The other leaders, including Wei’s pupil Li Zhengcheng (李正誠, ca.1920-1990), who eventually replaced him as the main public face of the church, promptly denounced Wei, multiplied their pro-CCP statements, and joined the newly founded CCP-controlled Three-Self Church. Inouye reports the rather grotesque statements by leaders of the True Jesus Church after Joseph Stalin (1878-1953) died in 1953. All proclaimed that Stalin was among the saved, and one of them claimed, quite blasphemously, that “Comrade Stalin has saved many tens of thousands of people, more than Jesus.”

It was, however, too late to escape the CCP’s wrath. During the campaign against Yiguandao and other new religious movements of the mid-1950s, the True Jesus Church had also been denounced as a “reactionary cult.” Li was arrested in 1957 and liberated after one year, then arrested again in 1960 and sentenced to a jail term of twenty years. He was rehabilitated in 1985, but did not forgive the co-religionists who had testified against him in a desperate attempt to escape persecution. In his later years, he joined a different Christian movement known as World Salvation Church (救世堂). In 1958, the True Jesus Church had been liquidated nationwide.

How the True Jesus Church Survived

It did not disappear, however. The flourishing foreign branches created an international body first headquartered in Taichung, Taiwan, and later, from 1985, in California, claiming (including China) a worldwide following of 1,5 million. In Mainland China, activities continued underground, including during the Cultural Revolution. New pastors were clandestinely ordained through the laying of hands by surviving pastors, thus guaranteeing the “apostolic succession,” although Inouye emphasizes the role of the women, serving as deaconesses and maintaining the flame of the True Jesus faith in times of persecution.

At the time of the new religious policy of Deng Xiaoping (1904-1997), the True Jesus Church was thus able to resurface. Its congregations, once again, joined the Three-Self Church, proclaimed their loyalty to the CCP, and claimed that they did not need to be “sinicized,” as they in fact represented the only genuinely Chinese form of Protestant Christianity. This created, however, an ambiguous situation. Officially, the Three-Self Church is a single “post-denominational”body, where pre-existing denominational difference should disappear, and members practice a form of “united worship.” In fact, more than by worship, Three-Self congregations are “united” by the fact that they are strictly controlled by the CCP, which in turn uses them for propaganda purposes at home and abroad, using their existence to claim (falsely) that Christianity enjoys “religious freedom” in China. Both Inouye’s fieldwork and CCP critical documents observed that True Jesus congregations continue to worship separately from other Three-Self believers on Saturday rather than on Sunday, practice baptism by immersion facedown, and preach their distinctive doctrines, including True Jesus’ trademark exclusivism. Signs with the name “True Jesus Church” disappeared from the larger, most visible churches when the CCP complained, but remained elsewhere. 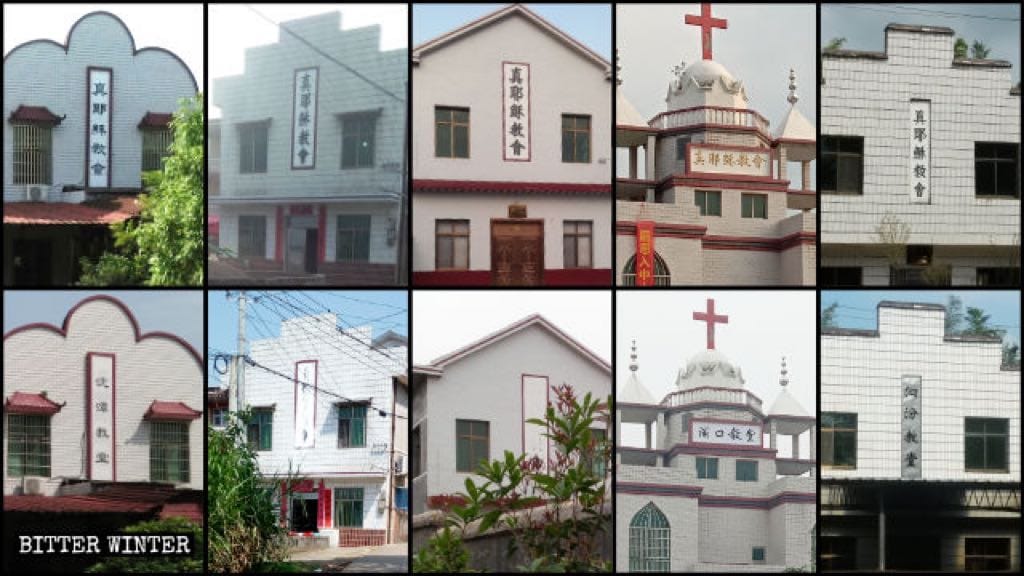 This was, however, then. Now things may be different. Bitter Winter reporters in China and other observers have noticed that signs “True Jesus Church” are being eliminated, and devotees forced to worship jointly with other Three-Self members. This May, the Ethnic and Religious Affairs Bureau of Wuhan city in Hubei Province issued a notice demanding to make sure that none of the churches of the True Jesus denomination in Wuhan’s districts bear the Chinese characters for “True Jesus Church.” It also ordered that any church insisting on keeping these characters should be demolished.

According to information received by Bitter Winter, some local governments in Hunan Province also held meetings to implement similar orders. In some places, it is demanded that the churches be named after the local place name. In Liling city alone, signboards have been demolished from twenty True Jesus churches in recent months. Incidents of demolishing signboards from True Jesus churches also happened in Henan, Fujian, and other provinces.

Believers responded defiantly to the demolition of the True Jesus signboards. Some of these churches had kept the signboards for many years, and believers protected the “True Jesus Church” signboards just as elsewhere crosses were protected. But the government resorted to harsh measures. Some officials designated True Jesus churches as xie jiao and as “reactionary” congregations; some claimed that the demolition of the True Jesus signboards was demanded because the government does not allow any institute, organization, or individual to bear denominationally distinctive signs. As reported to Bitter Winter, some officials said, “The True Jesus Church is not included in the five official religions, and as such it is illegal. The signboards outside the churches can only read ‘Christian Church,’ and can’t read ‘True Jesus Church.’”

In addition, some local governments demanded to investigate and confiscate the unofficially published hymnbooks used by True Jesus churches.

Xi Jinping’s new Regulation on Religious Affairs, which came into force in 2018, is aimed inter alia at destroying what is left of Protestant denominational peculiarities, outside of the state-imposed united worship and theology of the Three-Self Church. Once again, the distinctive identity of the True Jesus Church is at risk in China.