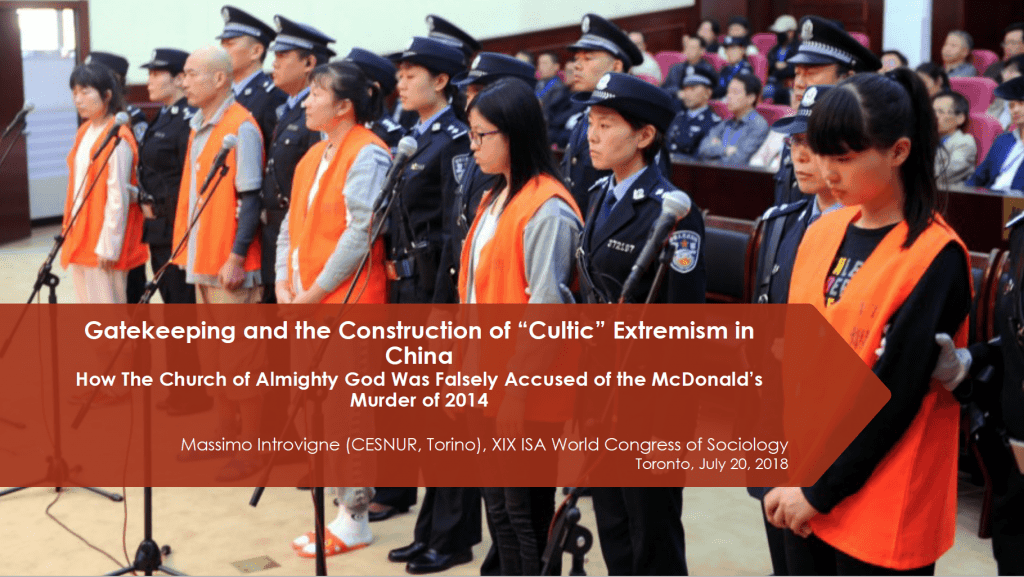 In 2014, China launched a massive international fake news campaign to attribute to The Church of Almighty God a homicide actually perpetrated by a different religious movement.

At the XIX World Congress of Sociology, the largest gathering of sociologists in the world, organized by the International Sociological Association in Toronto, Canada, a session was devoted on July 20, 2018, to “gatekeeping,” a process aimed at filtering the news so that only a part of them actually reaches the intended audience. Gatekeeping is practiced daily by mainline media, which decide what stories should actually be published and what should be killed, but in totalitarian regimes news filters are also created by official censorship and propaganda.

The Italian sociologist Massimo Introvigne, editor-in-chief of Bitter Winter, presented a paper on the McDonald’s murder of 2014, when members of a group labeled as a “cult” killed a woman in a McDonald’s diner in Zhaoyuan, Shandong. A massive campaign of fake news was launched by the Chinese regime after the incident, claiming that The Church of Almighty God, a Christian new religious movement, was responsible for the homicide. The campaign was extremely successful and continued for years. By 2017, 20,000 media had reported that The Church of Almighty God had perpetrated the crime.

In fact, however, this information was false. The gatekeeping process left out of the information circulated about the McDonald’s case the essential, i.e. that the group responsible for the homicide, which called itself the “True Almighty God,” was a different religious movement, although with a similar name, with a different theology and emphatically proclaiming that it had nothing to do with The Church of Almighty God.

Only in 2017, Western scholars were able to study the original documents of the trial and conclude that The Church of Almighty God had been the victim of a malicious and massive fake news campaign. Gatekeeping had misled many, including respected Western media.