The CCP uses soft and tough methods: from indoctrinating performances in praise of the Party to dismantling crosses. The goal is to make religions disappear. 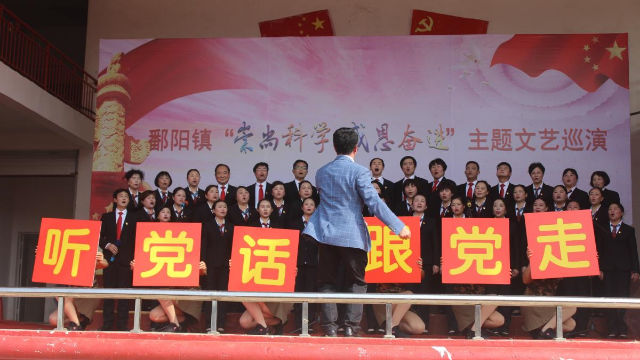 Poyang is the most populous county in southeast China’s Jiangxi Province that has a large population of Christians. The local authorities are using an endless stream of means to crack down on religious belief in the area.

In March, Poyang county government held a tour of cultural performance themed “Revere Science and Gratefully Forge Ahead,” promoting the Communist Party leadership and the ideas of atheism. A government official explained: “This tour of performances is intended to guide the religious people in establishing the sense of gratitude and patriotism, so that the broad masses revere science, believe in the Communist Party, stay away from superstition and religion.”

Video: Scenes of the cultural tour performance in Poyang county.

Shows to compete with God

On April 26, the Raozhou subdistrict office in Poyang county set up a stage in front of the Yongsheng (literally translated as Everlasting Life) Three-Self Church for live performances. The congregation inside the church could not hold gatherings because of the loud music and noises coming from outside. The believers asked government personnel to move the stage further away from the church but were refused. One of the officials blatantly said that the stage had been intentionally set up in front of the church to prevent people from congregating.

An actress involved in the performance revealed that the shows are intended to make people “show gratitude to the Party, obey the Party, and follow the Party.” “There are more and more people who believe in Jesus now. We’re rushing to put on two performances per day,” she explained.

The CCP’s strategy of holding recreational activities to “compete with God for people” has been comprehensively promoted, particularly in central China’s Henan Province, which has the largest number of Christians in the country. Many municipalities are replacing regular entertainment events for their residence with propaganda programs that unequivocally sing praises to the Party. Like the government of Luoyang city that issued a document to all its subordinate agencies in October last year, ordering to vigorously promote atheist propaganda and organize targeted cultural events on religious holidays and Sundays, to put on a “good rival show” and reduce the influence of religion.

Atheism works best if started at a young age

One of the shows in front of the Yongsheng Church involved a group of children wearing red scarves and Red Army uniforms, performing songs and dances in praise of the Communist Party. The next day, the show was brought to a local school. A community official who organized the event said that the decision to perform at the school was taken aiming to strengthen the students’ ideological education so that they learn to believe in science and stay away from religion from an early age.

Injecting students with atheist ideology is an essential tool for the CCP to block the ways by which religion can reach children. Since last year, the CCP has launched campaigns to resist religious beliefs on campuses nationwide by forcing students to sign oaths promising to keep away from religion, altering literary classics in textbooks to remove religion-related phrases, and making children report on their religious family members.

Lei Zhifeng, an independent commentator who has long worked as a lawyer, criticized the educational system in China: “The educational apparatus in this country is doing all of this around the clock, destroying the souls of all children who are born and raised in China. All of these children have basically lost the ability to think independently long before reaching adulthood, forming a conditioned reflex of contempt for religious belief.”

While propaganda performances were indoctrinating people, county officials intensified their large-scale campaign to demolish crosses and shut down religious venues. In March alone, crosses from more than ten Three-Self churches in the county were dismantled on the grounds that they were too close to a road or school and were replaced with Chinese national flags.

According to the person in charge of a Three-Self church who requested anonymity, after the provincial inspection team’s visit in Poyang on January 14, all crosses and other faith-related symbols were removed from churches, even religion-related words on their outer walls had been painted over or dismantled. Every week, village officials send people to churches to inspect and take photos that are later sent to their superiors.

Video: The cross on a Three-Self church in Lei village was dismantled.