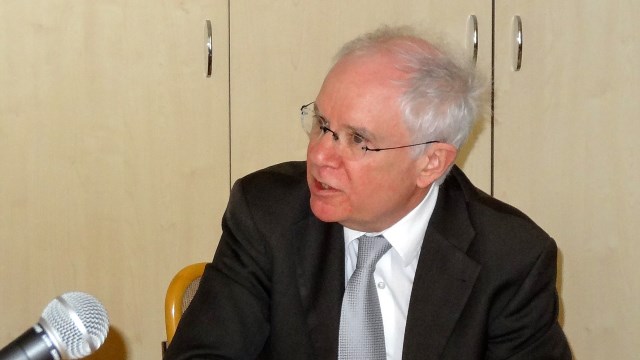 The idea of human rights is founded on the principle of natural rights. But official Chinese human rights principles state that human rights are rights given by society to the individual.

This text was presented as a speech at the seminar Freedom of Religion and Belief & The Right to Asylum, organized by Human Rights Without Frontiers and European MP Tomáš Zdechovský at the European Parliament on June 27, 2018.

As a human rights activist, I consider the denial of religious freedom, including the persecution of members of the Church of Almighty God, and the denial of other fundamental human rights in China as paramount problems in the world today. These problems have vast implications not only for individual freedom, but for the idea of freedom itself.

First, these problems affect so many millions of our brothers and sisters. China has a population of over 1.4 billion people. That’s more than the total population of North America, South America, Australia, New Zealand, and Western Europe combined.

The mind-boggling numbers translate into huge numbers of victims. According to Human Rights Without Frontiers, which keeps track of prisoners of conscience around the world, China has incarcerated the highest number of believers of all denominations in the world. Experts say the number of people being detained for their religious beliefs and observances is the highest since the Cultural Revolution.

This includes large numbers of Evangelical Protestants and Pentecostal Protestants belonging to underground house churches. Well over half of China’s Protestants belong to such independent house churches. The pressure on these organizations has intensified dramatically. They are being pushed hard to register and knuckle under to government authority, and those that do not are often labeled as “evil cults.” They are facing intensified scrutiny by security forces and seizure of their property, as well as physical attacks and arrests of pastors.

At the same time, the number of Protestant Christians in China is growing at an amazing pace and is considered to amount to a religious awakening. The number of Chinese Protestants has increased by about 10 percent every year since 1979, and given this rate of growth, China will have the largest population of Christians in the world within 12 years.

China’s millions of Protestants do not view themselves or behave as political groups or as a political opposition. But any religious community, in an authoritarian or totalitarian state that demands absolute loyalty, is a threat to the authority of the state. In recent years, the Chinese state has grown more controlling and more intrusive.

Authorities are invoking particular elements of the Chinese social and philosophical tradition to justify their authoritarianism and ethnic nationalism. Religion is a threat to this militantly atheist regime; the authorities even come down on citizens trying to celebrate the Persian festival of Nowruz.

But the pressing problem is what will happen when growing Protestant Christianity collides with a policy of growing state control over individual rights and freedoms, a policy that even extends to establishing loyalty records for each citizen based on monitoring their private reading and communication habits. The Chinese censors are so paternalistic, they have even banned the video game “The Sims” because it depicts same-sex relationships.

China is home to well over 10 million Catholics. A new and highly dubious agreement with the Vatican will bring them further under government control.

Local authorities in China forbid fasting on Ramadan and burn the Koran. According to the Christian nonprofit ChinaAid, the authorities want to eliminate Islam from Xinjiang altogether.

Here again, the regime is willfully and needlessly putting itself on a collision course with Muslims and feeding the Islamic extremism it claims to be resisting. The Uyghur people are the indigenous population of the Xinjiang region, which has only been under Chinese control since the 18th century.

Now the Uyghurs amount to less than half the population. They are subjected to discriminatory profiling using intrusive technology, as well as travel restrictions. But what is most disturbing is that Uyghur Muslims are being forced into so-called “re-education camps.” According to some estimates, about a million people have been detained in these camps and subjected to torture, including being forced to eat pork and drink alcohol.

And of course, we must not neglect to mention the violent oppression faced by practitioners of the Falun Gong spiritual discipline since 1999. A special bureau of the government has been set up with the explicit aim of eradicating them. Indeed, many disappear after being arrested and forced into prisons or labor camps.

China violates religious freedom and other human rights but claims to uphold human rights with policies that have raised the standard of living in the country. Everyone understands that Chinese culture places a great emphasis on collective responsibilities and is not as individualistic as societies in the Western world. But that is no excuse for violating individual rights, and individual rights are not inconsistent with group loyalty.

It is not an exaggeration to say that the Chinese regime does not accept the concept of human rights at all. The regime makes no commitment to upholding the natural rights of individuals, rights that are prior to the state and that transcend, and constrain, the laws made by governments and legislatures.

The idea of human rights is founded on the principle of natural rights. But official Chinese human rights principles state that human rights are rights given by society to the individual. So, if “society,” which means the state, can give rights, then those rights can be taken away. Human rights are thus no different than other laws.

The victims of China’s oppressive policies know this is not true. They understand that human rights exist and are sacrosanct, because they have lost those rights. And as people who understand human rights, they not only need our protection, they need to be welcomed into our pluralistic and free societies, at least until China stops violating international human rights norm and starts truly assisting in the project of building a world of free states, at peace with one another, where all can think and worship as they wish.